The Goldfinch by Donna Tartt: A review 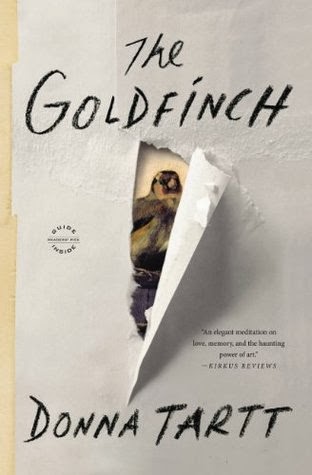 Donna Tartt's latest is a doorstop of a book at almost 800 pages long. It was also one of the books of the year for 2013, the book that all the critics raved about and many of them put at the top of their lists of the best books of the year.

I read several of those rave reviews and I was interested and excited to read the book myself. Perhaps I am overly suggestible but I find that I usually am in agreement with those reviewers whom I respect, so The Goldfinch shaped up as a very pleasurable read for me. But, in truth, I found that I couldn't love it quite as much as all the enthusiastic professional reviewers. It seemed over-long, over-wordy, and told me much more than I wanted or needed to know about the conservation and reproduction of fine furniture.

That is not to denigrate Tartt's talents in putting together this tale that has been described by many as Dickensian. The comparison is apt, both as to the length of the book and the complexity of the coming-of-age plot. It reminds one somewhat of Great Expectations with its story of the bereft orphan and his emotional and moral education.

The many characters that are a part of this tale are well-drawn. The reader feels as though she knows them personally, but frankly, I didn't particularly like many of those characters, including two of the main characters that readers were clearly meant to like and to sympathize with. That colored my overall feelings about the book.

This is the story of Theodore Decker, who narrates the book. We meet him when he is 13 years old and living in New York. He has been abandoned by his father and he and his beloved mother are on their way to his school for a conference with the headmaster when they are caught in a rainstorm and duck into a museum to wait out the rain. While they are there, a terrible thing happens. A bomb goes off and many people are killed, including Theo's mother. He was in a separate gallery from his mother and he survived the blast.

Theo finds an old man in the wreckage who was injured and is dying and that man gives him his signet ring and whispers "Hobart and Blackwell. Ring the green bell." The man also begs Theo to take a small painting of a goldfinch to save it from the fire and smoke. Teenage Theo follows instructions and stumbles out of the museum with the two objects. Objects that will mysteriously impact his life for years to come.

The orphan Theo is taken in by the Barbours, the Park Avenue family of his best friend, Andy. Months later, he is finally able to decipher the message of the dying man at the museum and he finds his way to an old curiosity shop type establishment run by one James Hobart.

Hobart was the partner of the man who had died in the museum. He accepts Theo, becomes his friend and benefactor, and through Hobart, Theo meets the beautiful girl named Pippa who had earlier been with the dying man at the museum before the bomb exploded and who was also gravely injured in the blast.

Just as Theo's life has finally achieved some stability and normalcy, his disreputable father, Larry, turns up to claim his son but mostly to claim any financial benefit that he might derive from that relationship. Larry is a gambler and he and his girlfriend, Xandra, take Theo with them to their home in Las Vegas.

In Las Vegas, Theo meets the person who will be his best friend and one of the most influential people in his life, Boris Pavlikovsky, also a motherless teenager living with a neglectful and abusive father. Boris is a street smart kid who has lived all over the world. He has boundless energy and apparently a boundless appetite for all kinds of drugs and all kinds of experiences. He soon introduces Theo to the pleasures of the drugged out life.

And this is just where I got a bit irritated with the book. I know I was supposed to be sympathetic to these two adolescent boys who had no real supervision or direction, but I got very impatient with their behavior. Maybe it was the mother in me. I just wanted to sit them both down and tell them to shape up! They never really did anything to engage my empathy and understanding.

Anyway, the story continues with many twists and turns, and I don't want to give away any spoilers here, but Theo eventually winds up back in New York with Hobart (Hobie) who becomes his caretaker/guardian and teaches him the furniture trade. Theo loves Pippa but becomes engaged to Andy's sister, Kitsey, who also loves somebody else. It's a mess really.

Then Boris enters the picture again and he and Theo travel to Amsterdam and become involved with art thieves and gangsters and the fate of "The Goldfinch," that famous painting which is always at the center of the action in this story, is very much in question. At this point, the tale becomes a bit of a suspense novel.

Tartt writes with a complete command of her subject. This is an authoritative narrative that seems to proceed with a certain inevitability. One can't imagine things turning out any differently for Theo than they do. She is a writer of enthralling talent and I can understand why so many have loved this book.

I would have loved it more had it been just a bit shorter and had Theo exhibited a little less egoism and more altruistic concern for others. Even so, it was a good book and I'm glad I invested the time to read it.