The visitor from outer space

March 14, 2013
The comet Pan-STARRS is (allegedly) visible now in the western skies just after sunset, alongside the setting crescent moon. I had intended to look for it earlier this week, but I was busy with other things and frankly just forgot. But tonight I was out there with my binoculars searching the sky near the moon for some bright object with a tail. I didn't find it.

It was only later, when I was reading about the comet online, that I realized I had been looking in the wrong spot! I was looking in the area to the left of the moon where the comet had been earlier this week. The updates on Pan-STARRS from Sky and Telescope magazine indicate that tonight the bright object with a tail should have been visible to the right of the crescent moon. Lesson learned. In the future, I need to do my research before I go comet-hunting!

The comet has now passed its brightest point, but it should be visible for a couple of more weeks according to the astronomers, and this helpful chart from Sky and Telescope will give me a better idea of where to look for it tomorrow night. 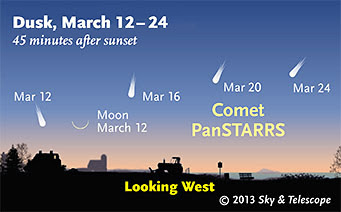 Tomorrow night again and for the rest of the time that it is visible, the comet should be to the right of the moon - or, that is, to the right of where the moon was on March 12, just above the western horizon after sunset.

Have you looked for this comet? Have you seen it? From what I have read, it is not extremely bright and dramatic, but anytime I can see one of these wanderers from the outer limits, it's a dramatic event for me, even if that wanderer appears faint or fuzzy. So, tomorrow night I'll be searching the skies again. To the right of the moon this time.
comets Pan-STARRS