March 27, 2013
Lately, the news for the Monarch butterfly has been all bad. It seems that every week we have a new story detailing the depressing news of the beautiful butterfly's decline. Illegal logging, rampant ecotourism, and unusually harsh winters have damaged the butterfly's winter sanctuary in Mexico. Mid-America's big factory farms' reliance on the use of chemical pesticides and herbicides have killed butterflies and their caterpillars and have destroyed the stands of milkweed which caterpillars need to feed on in order to grow and transform into butterflies. And looming over all of this are the effects of global climate change which is reeking havoc with weather patterns, causing extended droughts and, paradoxically, historic floods, and contributing to raging wildfires which damage the butterfly's food source and kill butterflies. It is estimated that today's population of the butterflies is approximately one-fifteenth of what it was in 1997.
This marks the third straight year of decline for this migrant butterfly which is a treasure of all three nations of North America. Indeed, its population is at the lowest levels ever reliably measured. There seems a very real possibility that the Monarch butterfly could become extinct. At the very least, its population will be a mere shadow of what it once was. As recently as 1994, wintering butterflies in the Mexican mountains covered 22 acres. By 2003, the area covered was down to 12 acres. During this past winter, it was only 2.9 acres. That is just shocking.
The best known fact about the Monarch is its migratory habit. It crosses the continent twice a year. It takes four generations of the butterfly to travel from Mexico to Canada. In order to make that long trek, it must have milkweed to nourish caterpillars into the next generation. You can easily see what the destruction of all those stands of milkweed across middle America has done to the prospects for the successful completion of the migration.
Of course, gardeners across the country have been trying to fill the void by planting more milkweed in their gardens. I have about twenty plants of the stuff and I just added three large plants this past week, because my old plants died back in the winter and were just emerging from their nap. Their leaves were not big enough to nourish many caterpillars. This is probably the most important thing that we, as gardeners, can do to help the butterfly. That and refusing to use chemical pesticides and herbicides in the garden. These can be death not only to butterflies but to so many useful and beautiful critters that make our gardens their habitat.
Many wildlife conservation groups have also made the Monarch's survival a priority. The World Wildlife Fund, for just one example, has sponsored the census of the butterfly and is looking for ways to aid it and to mitigate the forces aligned against its survival.  The organization Journey North, which tracks many migrating species including hummingbirds and other birds as well as butterflies, has invaluable information on its website regarding the Monarch's life cycle and what it needs to survive. They also encourage citizen scientists to report Monarch sightings to that website so that the migration can be tracked. (I've made my reports and I encourage you to do the same.)
Everyone loves the Monarch. No one wants to see it perish. So, why is it in such trouble? It seems to be trouble that is altogether of human origin, even the changing climate. Can we summon the will to change our practices in order to give the butterfly a fighting chance? If we can, we may save more than a butterfly. 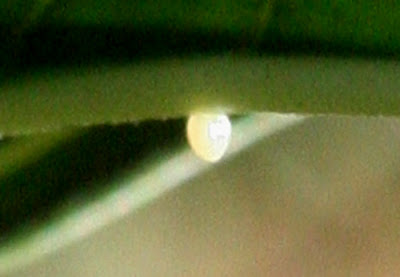 A Monarch egg on milkweed leaf. You can see the tiny embryo inside. 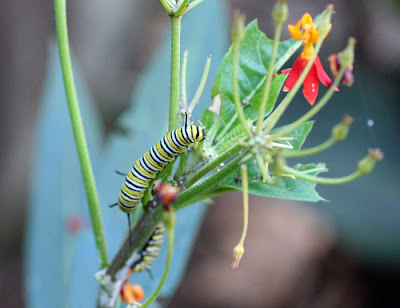 Monarch caterpillars on milkweed, their only source of food. 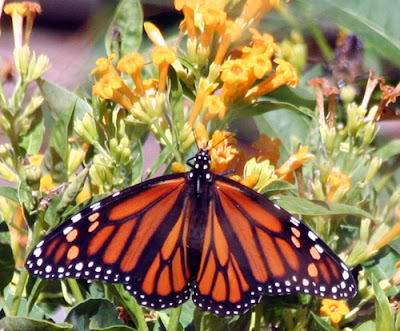 I don't have grandchildren, but if I ever should, I would hope they would still be able to see this sight.