How's that "Texas miracle" thing working for you?

August 20, 2011
Our governor, Rick Perry, has been swaggering around the country proclaiming in his exaggerated drawl about how he wants to do for America what he has done for Texas. God forbid!

Let's just take a look at how Texas stands in relation to the other 49 states in some areas that are extremely important to the average citizen. 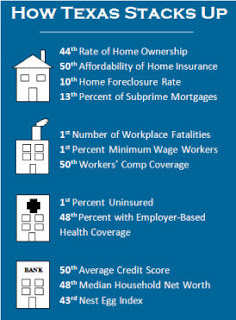 Yes, it is embarrassingly true that we are first in the country in the number of workplace fatalities and in the percentage of minimum wage workers.  Those jobs that Perry brags so much about creating are mostly minimum wage jobs and are often very dangerous jobs, not the kind of jobs that most communities interested in the health and welfare of their citizens would be eager to have.

Furthermore, we are number one in the number of uninsured residents.  Our emergency rooms overflow day and night with people who have waited until the last possible minute to seek medical attention because they have no insurance and cannot pay for medical care.  In addition, we are dead last in the country in workers' comp coverage.

This chart doesn't show it, but the fact is that in Texas, poor people pay 17% of their income in taxes, while rich people pay only 2%.  No wonder all those millionaires and billionaires are sending money to Perry and crossing their fingers that he will be able to do to America what he has done to Texas.

The truth is that the "Texas miracle" is a Texas myth.  It is not working well for the average citizens of Texas who daily breathe dirty air, drink dirty water, and go to work at low-paying and dangerous jobs.  And if they happen to get hurt on those jobs, they can't expect much help from their employer or from the state.