How did we get from there to here?

August 05, 2011
Can you remember the year 2000?  The country was at peace.  The economy was booming.  As for the federal budget - it was in the black!  Yes, there was a substantial surplus, and the country could look forward to continuing prosperity and using that surplus to address problems and the needs of the population.  All of that seems long ago and far away now.

Do you ever stop to think about how we got from there (big surpluses) to here (massive deficits)?  What accounts for the deficit which everyone in Washington decried during the recent set-to over the debt ceiling but which no one did anything serious (i.e., bringing in more revenue to the government coffers) to correct?  Well, here is the answer to both those questions. 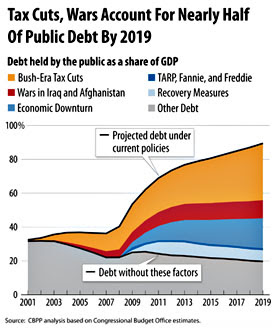 As you can readily see on this chart based on estimates from the Congressional Budget Office, the biggest portion of the debt now and in the future is a result of the Bush tax cuts.  Another substantial layer is added by the wars in Iraq and Afghanistan.  Without those two factors, even taking into account the economic downturn that began in 2008, we would be in pretty good shape today.

The cure to what ails us seems perfectly clear to me:  (1.) Let the Bush tax cuts - all of them - expire.  (2.) Get out of Iraq and Afghanistan ASAP.  That's not just a financial imperative, that's a moral imperative as well.

If we simply do those two things, we will be going a long way toward mending our economy and our society. We might even live to see the federal budget in surplus again.
deficit