Love and Saffron by Kim Fay: A review 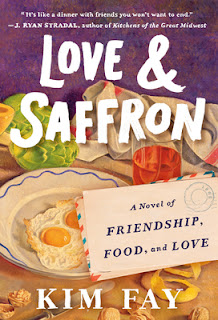 This is the story of a friendship between two women, told in their letters to each other over the years. It's a friendship based on the love of food and the good life. It begins with a gift of saffron.

Twenty-seven-year-old Joan Bergstrom lives in Los Angeles and has just started writing for the food section of the newspaper there. Imogene Fortier is fifty-nine years old and lives on Camano Island outside of Seattle. She writes a monthly column for a Pacific Northwest magazine. Joan is a fan of Imogene's columns and she writes her a fan letter, enclosing a gift of saffron. Their friendship blossoms through their exchange of letters in the 1960s, as they discuss world events like the Cuban missile crisis and the assassination of President Kennedy in addition to the everyday events of their own lives.

This is a short novel, only about 200 pages. I listened to it as an audiobook during a recent road trip. It was a quick read and kept us entertained for a couple of hours.

Imogene (Immy) writes a humor column about her daily life on Camano Island. Joan's special interest is discovering and writing about foods from other cultures, particularly Mexican. Her guide in learning about Mexican food and culture is a man from that country. Their relationship deepens as they share their interest in and love of good food.

Both Joan and Immy enjoy exploring foods that are new to them and they share that love in their letters. They also reveal their inner lives and feelings in their letters, things that are unknown to others who are a part of their daily lives.

The 1960s were a time of growing interest in food, an interest that was spawned in large part by the success of Julia Child's television show, "The French Chef." It was hard to resist Julia's enthusiasm for good food. The show is referenced in the book. Both Joan and Immy are fans.

I found the book's narrative interesting, if not compelling. The narrator did a commendable job of presenting the story. None of the characters really "grabbed" me but the story was good and if you happen to be going on a road trip, I can recommend it as an audiobook that will definitely keep you entertained.