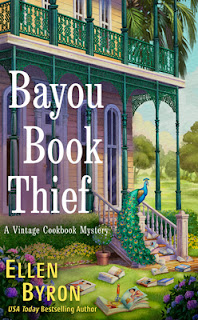 This is one of the two audiobooks that I listened to on my recent road trip. It is the first in a cozy mystery series set in New Orleans. The protagonist is a twenty-eight-year-old widow named Ricki James. Ricki was born in New Orleans but was living in Los Angeles with her husband, a stunt performer until he died during one of his stunts. Then she learned that her boss was a criminal. Her world seemed to be collapsing around her and so she headed home to the city of her birth to start over.
Ricki's hobby was collecting vintage cookbooks, and looking for a way to support herself, she decided to turn that hobby into a paying job. She would open a gift shop in the home turned museum of Genevieve Charbonnet, who had had one of the finest restaurants in the city before her death.
At first, everything goes pretty smoothly for Ricki in her new position but then she makes the distressing discovery that there is a thief among her colleagues. Then, even more distressingly, in the process of searching for a missing rare book, she discovers a dead body. Not just dead but a murder victim. It seems like Ricki's fresh start in life is being derailed.
Ellen Byron has done a good job of describing the atmosphere and culture of the unique city of New Orleans, the city where my new husband and I spent our honeymoon so many years ago. My fond memories of the place are only reinforced by Byron's narrative. She includes a lot of information about the city's history as well as about historical cookbooks. All of it is a seamless part of the story of Ricki and her efforts at solving a murder mystery.
Byron also has done a clever melding of various plot twists and side stories that help to move her chronicle along. Some of the side stories involve quirky secondary characters that add spice to the tale and make for a more entertaining and varied account. Overall, it was a creditable beginning to what is intended as a series featuring Ricki James and it gives the author quite a solid foundation on which to build.
My rating: 3 of 5 stars
2022 3-star reads 2022 books Ellen Byron