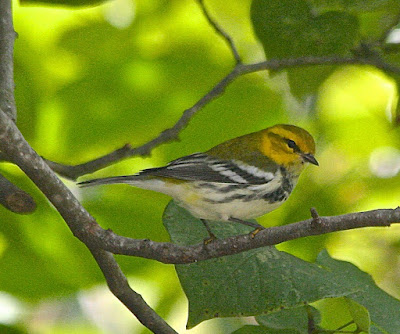 This, I believe, is a female Black-Throated Green Warbler who stopped in my backyard for a visit on her way north.
*~*~*~*
Wildfires continued to ravage parts of New Mexico this week. There has been an early beginning to the wildfire season in the West fed by a combination of high winds and extremely dry vegetation due to drought.
*~*~*~*
On the good news for the environment side of the ledger this week, the Interior Department confirmed this week that it will not be holding three oil and gas lease sales for the Gulf of Mexico and off the coast of Alaska that had been expected to take place, removing millions of acres from the auction block.
*~*~*~*
But on the other side of that ledger, the global average temperature rise of 1.5 degrees centigrade is likely to be reached at some point in the next five years. That is the point at which climate impacts will become increasingly harmful for humans and for the planet as a whole.
*~*~*~*
PFAS-tainted sewage sludge has historically been used as a fertilizer in fields and now those chemicals may have polluted as much as 20 million acres of U.S. cropland, according to a recent study.
*~*~*~*
Leaders of the world's major religions have joined with United Nations officials in urging financial institutions to stop bankrolling activities that drive climate change, including ending support for new fossil fuel projects.
*~*~*~*
More effort is needed to investigate and prosecute environmental crimes. For this, we need eco-detectives who can identify and uncover those crimes.
*~*~*~* 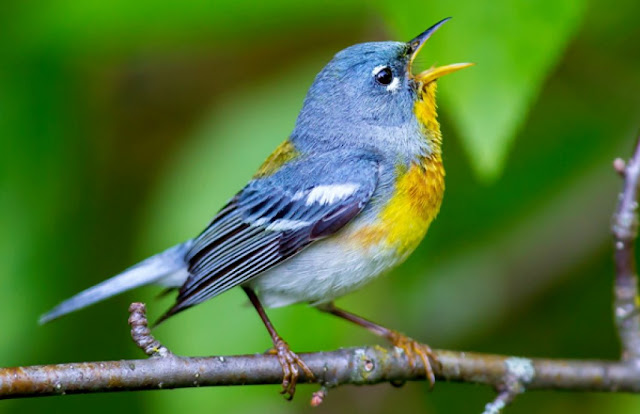 The American Bird Conservancy's "Bird of the Week" is the beautiful and musical Northern Parula.
*~*~*~*
The International Energy Agency's chief warned this week that climate chaos is inevitable if we continue to invest in large new oil and gas developments. Such projects would have little impact on the current energy crisis but could spell devastation for the planet.
*~*~*~*
A heatwave that has shattered records in parts of Texas is destined to spread through much of the central United States causing records to fall as it goes.
*~*~*~*
Margaret Renkl writes about endangered rivers and specifically about the Mobile River which is the third most endangered waterway in the United States thanks to the threat from coal ash pollution.
*~*~*~*
The beautiful San Gabriel Mountains in California are a very birdy place.
*~*~*~*
The soil beneath our feet comprises an astonishing ecosystem on which the future of the planet and of human beings on that planet depends.
*~*~*~* 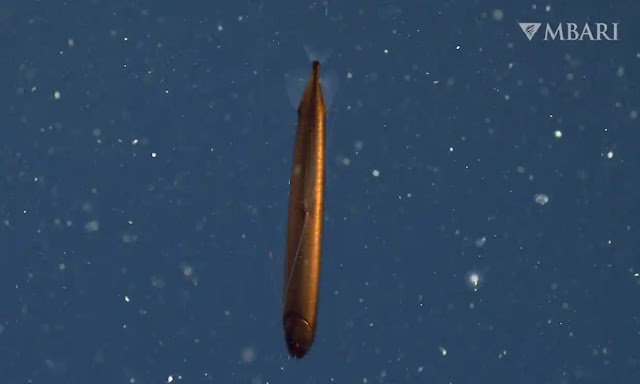 This weird creature is a highfin dragonfish that has been spotted off the coast of northern California. It is only the fourth time in nearly thirty years of deep-sea research that one has been seen.
*~*~*~*
The Revelator has a featured story on the shrinking tidal flat habitats in eastern China that are critical stopover sites for migrating birds.
*~*~*~*
The deforestation of Brazil's Amazon continues unabated. In fact, it surged to new levels for the month of April, nearly doubling the area of forest that had been removed in April of the previous year.
*~*~*~*
A mysterious process called horizontal gene transfer accounts for how some fungi became toxic.
*~*~*~*
It's not exactly a part of our earthly environment but it is a part of our galactic neighborhood; it's a supermassive black hole that sits at the center of the Milky Way and astronomers have taken a picture of it!
*~*~*~*
Cassava is a shrubby root that is grown in Africa and it works well as a substitute for wheat. It could even help to wean the world off that crop.
*~*~*~*
Some bats have learned to make a noise like buzzing hornets in order to scare off predators that might eat them. It would take a hearty or foolhardy predator indeed to face down a swarm of angry hornets.
*~*~*~*
When it comes to climate change, we (i.e., all of life on Earth) are in this together and it behooves humans as the species primarily responsible for the changes to get involved in helping other species survive.
*~*~*~*
In Kenya's Kipsigis community, Chepalunga Forest is at the heart of their culture. When indigenous trees were being lost, the local villagers decided to replant their forest and that is how 90,000 trees brought a forest back to life.