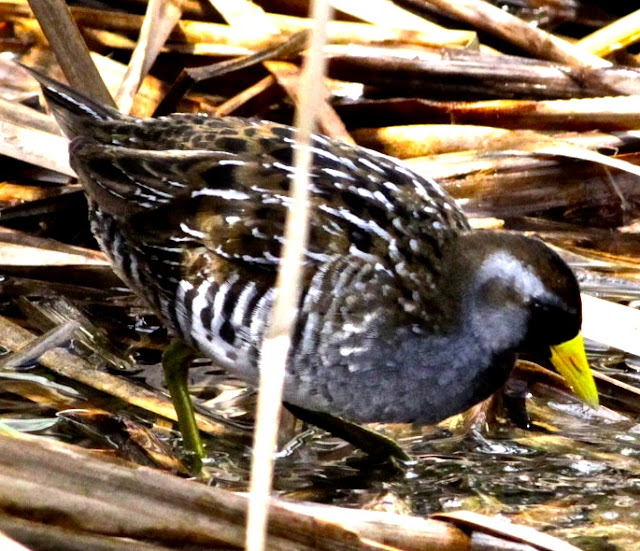 A Sora searches among the reeds for its dinner.
*~*~*~*
New Mexico is burning. A wildfire fueled by the drought has consumed thousands of acres and the governor of the state has asked the president to declare a disaster area in order to free up more funds to fight the catastrophic blaze.
*~*~*~*
A global review has found that birds are disappearing at an alarming rate. Half of the approximately 11,000 avian species on Earth are losing population while only 6% are increasing.
*~*~*~*
But there is hope. Just look at the California Condor, once nearly extinct and now flying over California's redwoods for the first time in a century.
*~*~*~*
India and Pakistan are suffering through a brutal heatwave which has exacerbated massive energy shortages on the subcontinent.
*~*~*~*
It's pollen season and the native pollinators are busy out there collecting it. One way to help protect native pollinators is to plant native wildflowers that will provide pollen and nectar for insects such as bees, ants, and butterflies.
*~*~*~*
Modern technology is helping to find and preserve ancient Native American cave art.
*~*~*~*
Nature will find a way to deal with just about anything that we humans throw at her. Even the Great Pacific Garbage Patch which we have learned is being colonized by tiny creatures.
*~*~*~*
In Zimbabwe, where the drought has brought intensified competition for food and water, there is conflict not just between animals but between animals and humans.
*~*~*~*
The transitional fossil fish called Tiktaalik roseae flopped out of the water and onto land some 375 million years ago and some would argue that we've been flopping ever since!
*~*~*~*
A recent paper by a national group of biologists and zoologists laid out a pathway for museums and zoos to work together to protect the planet's biodiversity.
*~*~*~* 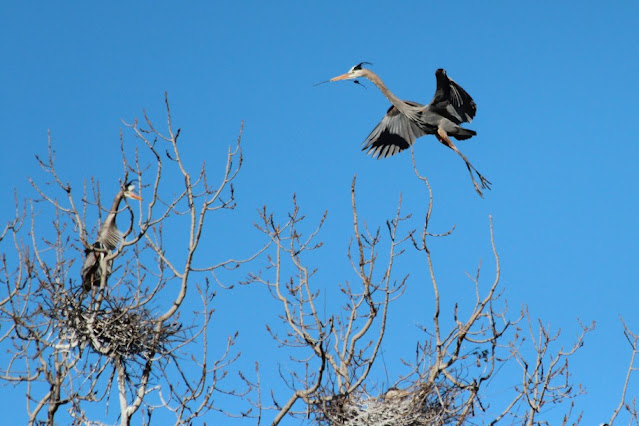 Here's a visit to a Great Blue Heron nest in Milford, Michigan.
*~*~*~*
A tribe living at the southern tip of South America was thought to be extinct, but it seems that their descendants are still living in Chile and that the government there will soon legally recognize them.
*~*~*~* 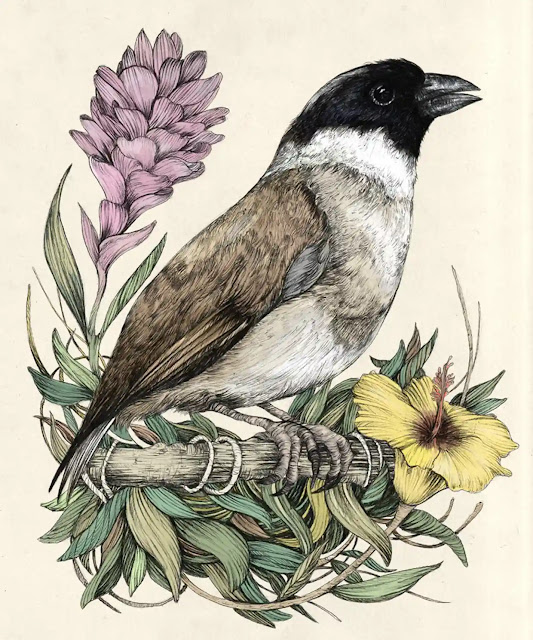 This is an illustration of the Hawaiian Po'ouli which is now considered to be extinct. The last one died in our lifetimes. Here is the species' obituary.
*~*~*~*
Oyster harvesting was occurring in Australia and North America for at least 10,000 years prior to colonization, helping to sustain the indigenous communities there.
*~*~*~*
Colonial Jamestown, the 400-year-old site in Virginia, is facing disaster because of climate change. Chronic flooding has landed the site on the endangered list.
*~*~*~*
Time-lapse photography by a NOAA satellite documents twin disasters, showing smoke from the wildfire in New Mexico and a dust storm stirred up by violent winds in Colorado.
*~*~*~*
Did you ever wonder how trilobites made babies? Well, perhaps not, but rest assured that even before there were birds and bees there was sex. Proof? Here we are!
*~*~*~*
A spate of attacks on human residents by wild boar in Rome has caused several neighborhoods in the north of the city to impose curfews. It seems that the wild boar have been sharing the city with humans for many years.
*~*~*~*
Single-use plastic products are being sold and distributed in America's national parks which certainly seems like a contradiction to the whole philosophy behind the national park system which the writer Wallace Stegner famously termed "America's best idea."
*~*~*~*
Exterminating wolves, on the other hand, is arguably one of America's very worst ideas. Will we never learn?
*~*~*~*
It turns out that graveyards, peaceful, unpolluted, and often left untouched for centuries, are some of our wildest Nature sites.
*~*~*~*
The U.N.'s latest climate change report details positive steps that the world can take to halt the cycle of disaster.
*~*~*~*
This is a bit of a milestone for me. This is the 500th of these roundups of bird and environmental news that I have done, going all the way back to my earlier blog, Backyard Birder, in December 2011. There have been many times over the years when I have considered giving it up. Does it really do any good? And yet I keep plugging away at it because somehow I just can't quit. We all have to do whatever bit we can to try to increase awareness of the peril we face and this is my little bit. Thank you for taking the time to read it.
weekly roundup