The chippies have arrived! Chipping Sparrows are always one of my favorite winter visitors. I generally see them in mixed flocks of small birds, but this week there was a pretty big flock of only the little sparrows - about 15 to 20 birds - around my front yard feeder. What a wonderful sight!
*~*~*~*
The Tonga volcanic eruption and its aftermath are still making news. The eruption itself was captured by satellite imagery and could be seen from space. Meanwhile, scientists are trying to understand the global implications of the eruption. Their conclusion is that it may affect global weather, at least in the short term.
*~*~*~*
Ecuador has announced that it is extending protections for the Galapagos Islands to more than 20,000 square miles of ocean to the northeast of the archipelago. No fishing will be allowed in half the area and longline fishing will be banned in the rest.
*~*~*~*
The Cornell Lab of Ornithology has announced a new online course entitled "Feeder Birds: Identification and Behavior." It is designed for backyard birders to learn more about identifying and understanding those birds. And it is all just in time for the Great Backyard Bird Count that takes place annually on Presidents' Day weekend, this year February 18-21.
*~*~*~*
Here's a reminder that the warming ocean is likely to create substantial changes in marine ecosystems.
*~*~*~*
A small pristine seven-acre island that sits in the Prairies River between Montreal and Laval in Quebec has been donated by its 93-year-old owner to the Nature Conservancy of Canada. He had owned the island since the 1960s and had rebuffed many offers over the years from developers to buy the land.
*~*~*~*
The California city of Sunnyvale has been overrun by thousands of American Crows. The streets are "riddled with crow poo" and city officials are planning to use lasers to try to chase the birds away.
*~*~*~*
It is a massacre. The slaughter of gray wolves in the states of Montana, Idaho, and Wyoming has no precedent within the last century.
*~*~*~*
In what is the first known incident of a human-engineered hybridization of species, DNA studies have shown that a female donkey and a male Syrian wild ass were crossed to create the kunga in ancient Mesopotamia 4,500 years ago.
*~*~*~*
Koalas are getting harder to find in the wild, but scientists in Australia are searching for what may be a hidden population of the charismatic animals.
*~*~*~*
Illinois has recently passed the Climate and Equitable Jobs Act which offers a model for other states to build coalitions to help communities and the planet.
*~*~*~*
The cocktail of chemical pollution that pervades the planet threatens the stability of the global ecosystems upon which humanity and, indeed, all life depends. It is past time for drastic action to contain the production and release of those pollutants.
*~*~*~*
And in the Northeast U.S. lead ammunition is hampering the recovery of the Bald Eagle. Ingesting the ammo is killing large numbers of eagles every year, according to a new study.
*~*~*~*
French researchers have discovered one of the world's largest previously unknown healthy coral reefs off the coast of Tahiti. The discovery raises hopes that other such finds may be waiting for explorers.

Global climate warming is turning the Arctic green and that is not a good thing.

The debate about Pluto's status continues. Is it a planet or isn't it? Well, as far as I'm concerned, that debate is long settled; Pluto always has been and will be a planet! 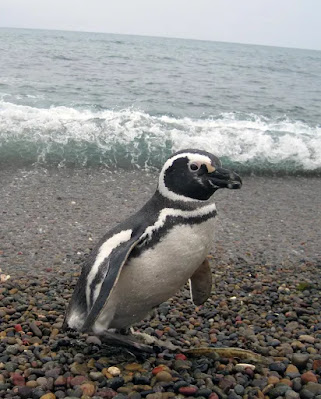 Climate change is forcing adaptations throughout Nature and that includes among the Magellanic Penguins of Patagonia like this one.
*~*~*~*
The Olympic Cougar Project is a partnership between Native American tribes, a renowned cougar expert, and biologists with the Washington Department of Transportation. Studying the animals means tracking them which depends on fitting them with collars that have batteries. What happens when those batteries have to be changed?
*~*~*~*
The summer heat torturing the southern hemisphere continues. On January 13, Australia tied the record high temperature for the southern hemisphere at 123.3 degrees F. That record had held since 1060.
*~*~*~*
A rare Hawaiian plant sometimes referred to as a "cabbage on a stick," was declared extinct in the wild in 2020, but it persists thanks to the efforts of dedicated biologists.
*~*~*~*
The Biden administration is expanding efforts to stave off catastrophic wildfires in the West. The plan is to more aggressively thin forests around "hot spots" where Nature and neighborhoods collide. The plan is set to cost $50 billion.
*~*~*~*
The iconic Joshua trees of the Mohave Desert are facing several threats to their survival including climate change and human development. But a dedicated band of volunteers is planting Joshua seedings to try to replenish the ravaged forest.