The Smash-up by Ali Benjamin: A review 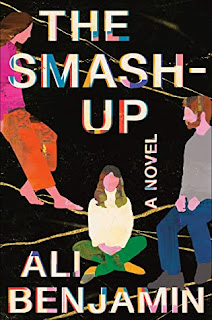 Ali Benjamin has taken her inspiration from Edith Wharton's Ethan Frome, even borrowing the name of its title character. Her Ethan and his wife Zenobia ("Zo") and their 11-year-old daughter Alex have moved from New York to the village of Starkfield, Massachusetts, a fictional town in the Berkshires, in search of a quieter, less complicated life. Starkfield is described as possessing "a nondescript village green, around which are scattered a handful of small businesses, no more than one of every variety." It sounds idyllic, but it doesn't quite work out that way.
Ethan is the semiretired co-founder of a media start-up. His former partner is being accused by a former employee of sexual harassment and exploitation and he is pressuring Ethan to support him. Zenobia is a struggling filmmaker who gets deeply involved with a local activist group called All Them Witches. It is September 2018 and the Senate confirmation hearings of Brett Kavanaugh are in progress. The "Witches'" outrage is palpable. Meanwhile, Alex is completely obsessed with "Wicked" and she is seriously impulse-challenged. She attends Rainbow Seed School and the parents of some of her classmates are not happy about that and are trying to push her out. The family lives in a half-restored (they've run out of money to complete the restoration) house with their aging dog, Hypatia, and a boarder/babysitter named Maddy. All of these challenges are threatening to crumble the Fromes' marriage.
For the Fromes, the 2016 presidential election marked "the break between before and after, then and now." Ethan was convinced that it was really no big deal and everything would be okay because this is America. Zo's reaction is white-hot fury. That's when she came to help organize the group that became All Them Witches, a sobriquet bestowed by some old guy who was appalled at their activities. They happily adopted it as their own. The group organizes, makes posters, and marches to protest. They meet twice a week, many of them proudly wearing their pink hats.
With Zo's involvement with her group, Ethan suddenly has more of the household's domestic responsibilities. He has more of the care of Alex, including making sure she gets to bed on time. He feels all of these added responsibilities as something of an imposition, a sentiment with which Maddy sympathizes. The reader might here suspect that these two are headed toward an affair and Ethan seems like he would welcome that but Maddy has other things on her mind.
The fraught politics of the time impact all of their lives and it seems that the Fromes have forgotten why they moved to Starkfield in the first place. They had hoped to build a supportive and peaceful idyll that would encourage creativity and provide an environment where their daughter could develop into her best self. All of those good intentions now seem at risk. Can this marriage be saved? Should it be?
Ali Benjamin is a skilled writer. She tells her story through the character of Ethan. She presents him as a well-intentioned but misguided husband and father who doesn't really understand why his wife is so angry and what she is trying to accomplish through her activism. At the same time, Zo is presented sympathetically and we can see, as perhaps she can't, that Ethan himself may, in fact, be one of the men who is part of the problem that her group is protesting. Meanwhile, they both at times seem to lose sight of their daughter's needs. There are no real heroes here and it is hard to know just who one should root for. I choose Alex. She is a delightful character and her part in this narrative is often quite funny. The levity is most welcome.
My rating: 4 of 5 stars
2022 4-star reads 2022 books Ali Benjamin