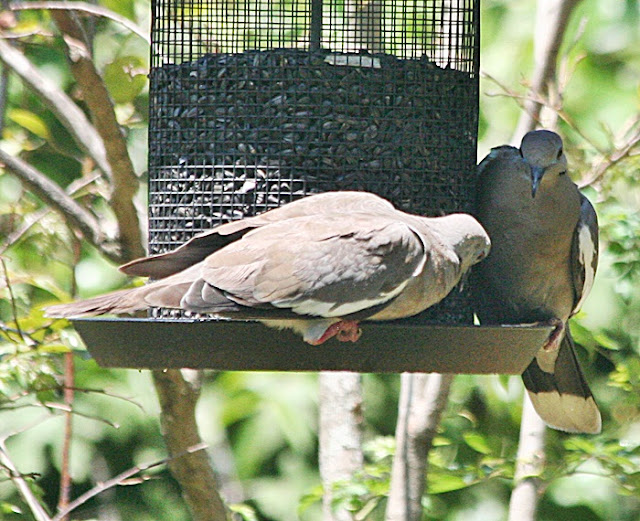 White-winged Doves have been prominent visitors to my bird feeders this week. When they come, they generally come en masse. It's not unusual to see 10-15 on the feeders or on the ground under the feeders at a time.
*~*~*~*
Lots of "hot" stories in the news this week:
- 2021 was the fifth hottest year on record according to scientists. The seven hottest years on record have occurred in the last seven years.
- How hot has Earth been during your lifetime? This link allows you to check that.
- For nearly a quarter of the planet's population, 2021 was actually a record hot year.
- The waters of the Gulf of Maine spiked to record warm levels in autumn of last year. The gulf is warming faster than 96% of the world's oceans.
- This map shows where all-time record temperatures for both heat and cold were set in the United States during 2021.
- In most of the country, winter is the fastest-warming season and that is bad news for biodiversity, water supply, and farm yield.
- While winters are warming, in the southern hemisphere where it is summer, South America is suffering through record summer temperatures as high as 113 Fahrenheit.
- For the sixth consecutive year 2021 saw the hottest temperatures on record in Earth's oceans.
*~*~*~*
But in Antarctica, there is still plentiful habitat for icefish. In February 2021 a breeding colony of icefish comprising 60 million active nests across 92 square miles was discovered in the icy waters there.
*~*~*~*
The effort to save the endangered Puffin from extinction is being impacted by climate change and not in a good way.
*~*~*~*
U.S. greenhouse emissions were down in 2020 raising hopes that that might prove to be a new trend, but in 2021 emissions roared back, rising 6.2% compared to the previous year.
*~*~*~* 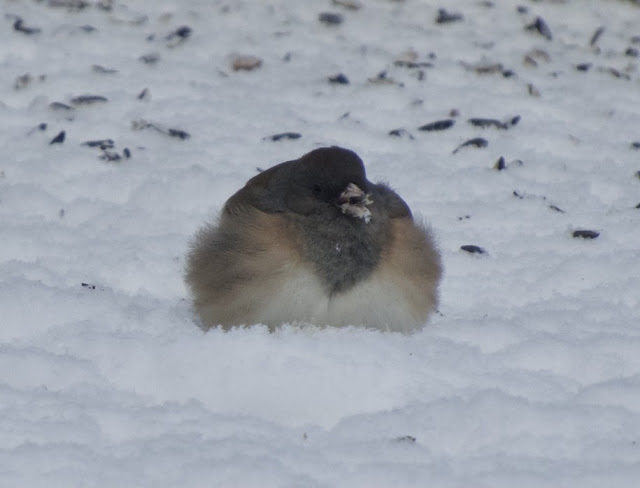 Birds have a variety of adaptations, both physical and behavioral, to help them maintain their body heat in cold weather. One of those is the ability to transform themselves into a spherical puffball as this Dark-eyed Junco illustrates.
*~*~*~*
Do bottlenose dolphins engage in sex for pleasure? There seems to be some evidence to support a positive response to that question.
*~*~*~*
The Biden administration is working to restore energy efficiency standards that were weakened by the previous administration, but there are frustrating delays in being able to implement the reversals.
*~*~*~*
Margaret Renkl has an appreciation of snow.
*~*~*~*
And here's an appreciation of the biologist who refused to give up on the California Condor when only 22 were left in the wild. Thanks to her efforts the bird survives and now numbers more than 1,000.
*~*~*~* 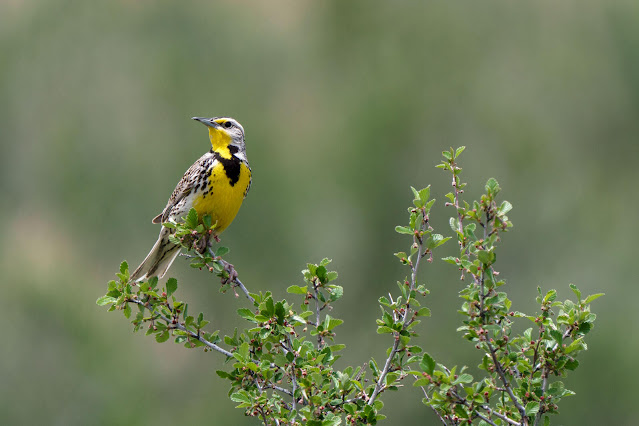 Western Meadowlark, definitely worth protecting!
The Migratory Bird Treaty Act that protects birds has now been fully restored by the Biden administration. Now the effort is to enhance and increase those protections.
*~*~*~*
The nation's largest wind energy project is nearing completion in western Oklahoma.
*~*~*~*
In Mexico, the indigenous Mazahua people are dedicated to protecting the Monarch butterflies that winter in a reserve in their territory. They are so determined that they have formed armed brigades to protect against illegal logging.
*~*~*~*
A study in Science Advances shows that Montana's warming climate is causing the native trout species to dwindle and is making it easier for invasive species to become established.
*~*~*~*
In a new policy established by the Environmental Protection Agency, the potential impact of new pesticide active ingredients on endangered species will be evaluated before they are registered.
*~*~*~*
In September of 2021, the U.S. Fish and Wildlife Service announced that it would remove 23 long-unseen species from the protection of the Endangered Species Act because "you can't keep protecting what's already gone." Among the species to be officially declared extinct is the "Lord God bird," the Ivory-billed Woodpecker.
*~*~*~*
The indigenous tribes that live around Lake Superior depend on fishing to survive, but the fish that they catch are now contaminated by "forever chemicals."
*~*~*~*
Mountain lions coexist with humans in and around the city of Los Angeles and one of the most famous of the lions is a thirteen-year-old animal called P-22. A cat believed to P-22 was recently videoed in a backyard near Griffith Park. He looks quite sleek and well-fed, doesn't he?
weekly roundup