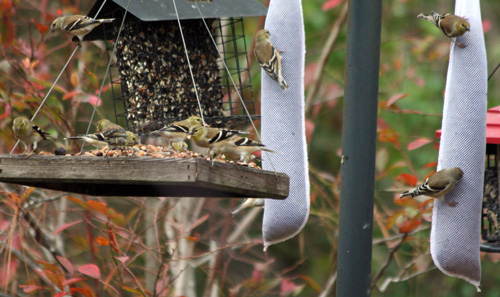 This is the first week that American Goldfinches have shown up at my feeders - or maybe just the first week I've seen them there. This picture was actually taken a couple of years ago. I haven't seen this many yet but they will likely come.
*~*~*~*
The Revelator has identified six big environmental stories that bear watching in 2022.
*~*~*~*
Clean drinking water is at a premium in so many parts of the world. The problem in most cases is an inadequate infrastructure. A water bottle company has one possible solution to the problem.
*~*~*~*
The Arctic region's air does not generally engender lightning strikes, but there has been a drastic rise in such strikes due to the warming air caused by climate change. Scientists find the change worrying.
*~*~*~*
Twenty wolves have been killed after wandering outside of Yellowstone National Park where hunting is prohibited. Now, only 94 remain in the park, but the hunting season is still on in Montana and conservationists expect even more of them to be killed.
*~*~*~* 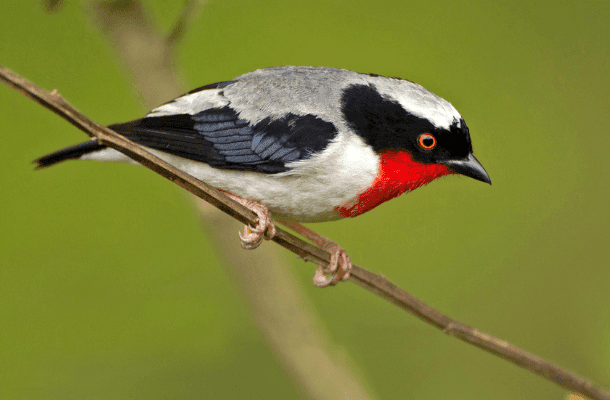 This is a Brazilian bird called the Cherry-throated Tanager. It is critically endangered but there is hope for its survival. A partnership of conservation organizations has established a 704-acre protected area of Brazilian Atlantic Forest as a reserve for the little bird.
*~*~*~*
In 2021, 205 new plant species were named by botanists around the world. The newly identified plants are vital parts of the planet's biodiversity and may have benefits as yet unknown.
*~*~*~*
The elusive Australian Night Parrot was thought to be extinct for nearly 140 years until it was discovered again in 2013 by a naturalist whose credentials were a bit questionable. In fact, he had found the parrot but faked the evidence of it. However, its existence has later been confirmed by others with actual pictures like this one: 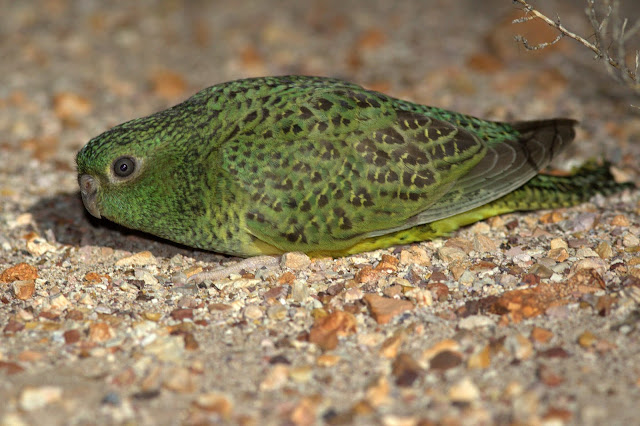 Australian Night Parrot.
*~*~*~*
Red wolves, likewise, were declared extinct in 1980, but it seems remnants of the species have been hiding in plain sight. The "ghost wolves" of Galveston Island are canid mixtures of coyote and red wolf DNA. Their appearance is distinctly different from the average coyote.
*~*~*~*
The Endangered Species Coalition has produced a list of "last chance" species that are endangered by climate change. The top ten list for North America includes birds, mammals, reptiles, plants, and one butterfly, the Monarch.
*~*~*~*
In an innovative plan, England's farmers are being paid to rewild their land. The plan should result in large tracts of land being managed to conserve species, provide habitats for wildlife, and restore health to rivers and streams.
*~*~*~*
Forest management methods such as controlled burns can play an important role in limiting the damage caused by wildfires. The Bootleg fire in Oregon last year provided concrete evidence of that.
*~*~*~* 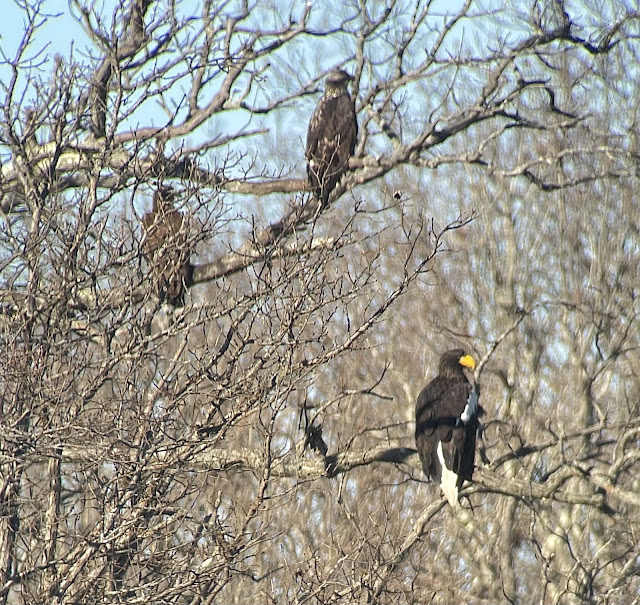 That wandering Steller's Sea Eagle that was reported here last week turned up to give birders in Maine a thrill this week. Here he is pictured with two immature Bald Eagles.
*~*~*~*
Conservation is clashing with development (doesn't it always?) at the Komodo National Park in Indonesia. The park was established in 1980 to protect the giant lizards.
*~*~*~*
Some of the grizzlies in Yellowstone National Park are moochers. They join the chase of the wolf packs there and then steal their kill from them. They are kleptoparasites.
*~*~*~*
The rapidly warming Arctic is giving rise to another environmental change in addition to the aforementioned lightning. Beavers are moving north with the warming climate and their dams will likely have an important effect, good and bad, on the Arctic environment.
*~*~*~*
A search is underway to find some of the rarest birds on Earth. The Search for Lost Birds is a collaborative effort of several conservation groups.
*~*~*~*
A study of hedgehogs has revealed that the battle between fungus and bacteria living on their skins led to the emergence of a strain of MRSA (methicillin-resistant staphylococcus aureus) that can infect cows and humans.
*~*~*~*
Scientists use satellite technology to monitor the health of peat bogs which are vital carbon sinks. They use the information gleaned to help protect and restore them.
*~*~*~*
Brazilian scientists are alarmed about a drastic increase in deforestation in the world's most diverse savanna.
*~*~*~*
There are forests and then there are forests. In North American forests not all trees are created equal. The mighty white oak pulls much more than its weight.
*~*~*~*
On San Juan Island, 2021 was the Year of the Foxes, and here is the photographic evidence.
weekly roundup