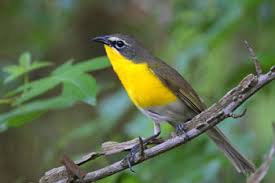 I heard my first Yellow-breasted Chat of the season on Thursday. "Heard" is the operative word; I never actually saw the bird. It was in the shrubbery in my next-door neighbor's yard and, as is typical of the birds, was giving its strange hooting, whistling, laughing calls as it skulked about scouring the leaves for insects. I've always been fascinated by chats, partly I think because I remember them well from my childhood. Their behavior, as well as their calls, is unique and memorable. But the birds are fascinating for other reasons as well, mainly because ornithologists can't agree on what they are! For more than a century, they were classified as members of the wood warbler (Parulidae) family, even though they are more than twice the size of some members of that family and their behavior is not typical of wood warblers. In 2017, after taking another look, the American Ornithological Society decided the birds should be in a family of their own, the Icteriidae, and they changed the bird's scientific name to Icteria virens. That decision was not universally accepted and the controversy rages on. Who is the Yellow-breasted Chat? Meanwhile, the chat knows fully well who he is and continues his skulking migratory route north where he hopes to raise more little chats who also won't care what the AOS calls them!

The last known female Yangtze giant turtle has died leaving only three others that are known to exist. There is a male who lived at China's Suzhou Zoo with the female who died and there are two wild turtles who live at separate lakes in Vietnam and whose sex is unknown. So there is still at least a very faint hope that the species may be saved.

Meantime, there is good news concerning the North Atlantic right whales: They are experiencing a mini baby boom. No calves at all were reported last year, but so far in 2019 seven babies have been seen in New England waters. For a species whose total population is only known to be 411, that is a significant increase.

Here's proof that families, even eagle families, come in many different configurations. The Stewards of the Upper Mississippi River Refuge have documented a family of three adult Bald Eagles, two males and a female, that are raising three eagle chicks at the refuge. All three participate in feeding, protecting, and caring for the little ones. 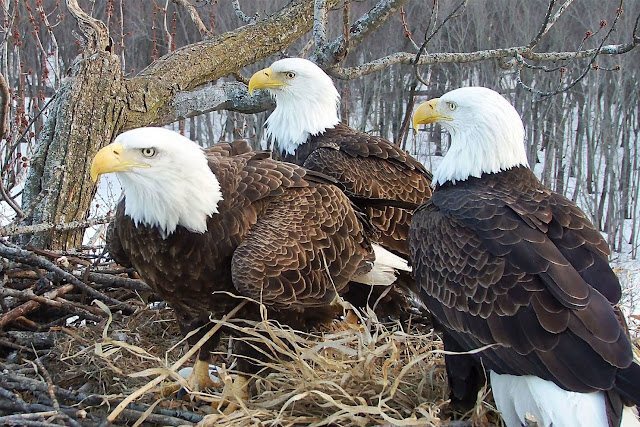 And here they are. The mother, Starr, is on the nest (obviously before the eggs hatched), and the two fathers, Valor I and Valor II, stand by.

Over the past half century, under Democratic and Republican presidents, the killing of migratory birds, even accidentally, has been prosecuted to the full extent of the law. No more. Prosecutions are way down under the present anti-science, anti-environment administration. Malefactors are only prosecuted if the killing was deliberate and there is no guarantee they will be prosecuted even then.

The Kluane Red Squirrel Project, known as Squirrel Camp to participants, has been going on in the wilds of Canada's Yukon region since 1987. It has collected masses of data on generation after generation of red squirrels, not unlike Jane Goodall's tracking of chimps over the years. The aim of the project is to observe and address such issues as the effect of climate change on squirrel reproduction, how squirrels defend their territory, and what happens when a squirrel takes over the food hoard of a dead squirrel. The project has produced a number of published scientific papers on these subjects.

A federal judge late Friday delivered a significant setback to the Trump administration’s policy of promoting coal, ruling that the Interior Department acted illegally when it sought to lift an Obama-era moratorium on coal mining on public lands. The decision by a district judge in Montana does not reinstate President Barack Obama’s 2016 freeze on new coal mining leases on public lands but it directs that the administration must do adequate studies of the environmental effects of mining before approving any such mining.

Sea spiders have proved to be extremely adaptable creatures. There is hope that this ability to adapt will save them as the oceans warm up.

The first Golden Eagle to be tagged with a radio transmitter in Yellowstone National Park was found dead in the park recently, only a few months after the tagging. A necropsy showed that the bird had died of lead poisoning. It had evidently ingested the lead from bullets that hunters had used in killing big game animals whose carcasses were then left in the wild for scavengers like the eagle to eat. There are lead-free bullets available, but apparently, they are not in wide use and are not mandated by most states.

Migrating birds rely on forested areas for sustenance on their overwintering grounds, but deforestation in these areas is threatening their ability to survive. Many birds are experiencing precipitous population declines because of the change in land use in Central and South America.

Data from eBird, the online citizen science site for reporting bird sightings, is helping identify areas that are important to migratory birds' survival. It has helped to locate sites essential to the survival of 117 neotropical migrants.

A six-decade plankton study, from the 1950s to the present, is helping to chart the rise of plastic in our environment and shows how it has grown into a global emergency.

Winter irruptions of birds like the Red-breasted Nuthatch appear to be followed by less successful breeding seasons, suggesting that birds do pay a price for their wanderings. Perhaps the stress of having to travel far in search of food makes it more difficult for them to breed successfully in the following season.

How do Jackdaws, members of the super-intelligent corvid family, remember where they've been and what they did? Neuroscientists at Ruhr University are hoping to determine that in their ongoing study of the birds.

The endangered Saltmarsh Sparrow is one of only five species of birds that are totally restricted to the saltmarsh habitat for their entire lives. Thus, the rise in sea levels as a result of climate change is an existential threat to their continued survival.

One tiny bit of good news emerged from the fiery devastation of Notre Dame cathedral this week. The 180,000 bees that lived in hives on the roof of the cathedral survived. The beekeeper who oversees them was able to confirm that the hives are intact and the bees are alive and well. He called it a miracle. Perhaps he is right.