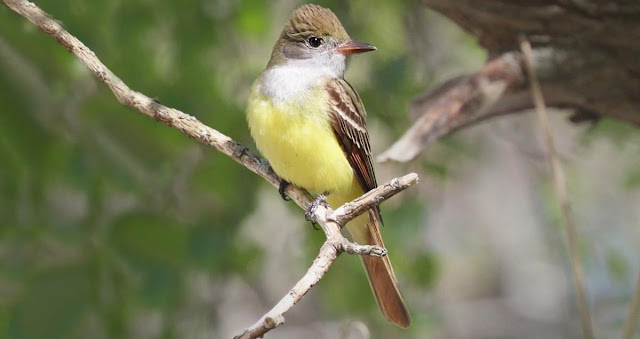 The Great Crested Flycatchers arrived this week. While sitting in my backyard on Wednesday afternoon, after my few days in the hospital, one of the first sounds I heard was the bird's unmistakable call. It was like a "welcome home" and a most welcome sound for me.

Have you heard about Netflix's new Nature documentary, "Our Planet"? It sounds quite interesting, although I admit I haven't seen any of it yet. Apparently, it has a lot in common with the original "Planet Earth," including the voice of David Attenborough, but this series also "repeatedly, unambiguously, and urgently" delivers the message that our planet is imperiled by our own actions. It's a message that badly needs to be pounded home.

For the first time in many decades, there is a new wolf pack living on the western side of the Cascade Mountains in Washington. A male wolf wearing a radio collar had explored the area along with a female during the winter and they now appear to have settled down and established their territory.

An Alaska judge this week blocked Donald Trump's efforts to allow drilling for oil in parts of the Atlantic and the Arctic. The judge said he exceeded his authority when he reversed bans on drilling in sensitive parts of those two oceans. The bans established during the Obama Administration were restored.

And, in fact, a test well drilled in the Arctic in 1986 revealed very little oil in the Arctic region which calls into question whether it would even be economically viable to drill there.

In further news of the recovery of the endangered California Condor, biologists have confirmed that a pair of the birds are incubating the first egg they have produced at a nest in Zion National Park in California.

But speaking of extinction, the hunger of humans for exotic foods is driving some animals into the void. Here's a list of ten animals for which our appetites may prove to be the final nail in their coffins.

The massive asteroid that hit the shallow sea adjacent to Mexico sixty-six million years ago not only killed dinosaurs. New paleontological digs in North Dakota are revealing the extent of the devastation to other species, especially fish.

A project called Canid Camera is using volunteers to assist in documenting the wildlife activity in a new forest just north of New York City, and they are finding that there is quite a lot of activity there. There are wildlife cameras stationed throughout the forest and the volunteers sort through and identify the resulting pictures.

There is a limit to what even the largest and most resilient ecosystems can tolerate. The Great Barrier Reef in Australian waters was once thought "too big to fail" but current research indicates that that is not true.

Antarctica is losing more of its ice. An iceberg twice the size of New York City is about to split away from the continent.

Silver digger bees, a rare, sand-loving wild bee that had not been seen in any numbers in the San Francisco area in over a century, have been found in abundance at the Presidio, creating excitement at the Presidio Trust and among bee-lovers and ecologists.

The abysmal record of the government in failing to consult with tribes about the use of land in their treaty areas continues with the Te-Moak Tribe of the Western Shoshone and a plan to lease oil and drilling rights for nearly a million acres of land near them.

Surely everyone knows by now that our friends, the trees, help to ameliorate our climate and make it livable. This is especially important and true in the concrete jungles of the cities. Research indicates that it would take a 40% tree canopy of the city to provide adequate protection.

Scientists are forever tinkering with the nomenclature and classifications of things. They just can't help themselves, I guess. This is nowhere more true than with birds, which, admittedly, do afford a considerable palette for tinkering and mixing. Scientists have now come up with a new family tree for songbirds which rearranges things a bit and clarifies some relationships.
weekly roundup