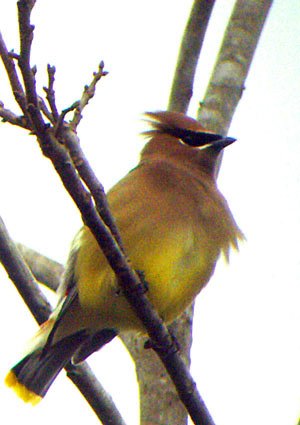 The Cedar Waxwings are still with us. They are generally the last of our winter visitors to head north and will likely be here for another month at least. The flock in our neighborhood is smaller than in recent years, numbering, at a guess, somewhat less than a hundred birds. The flocks do usually get bigger as spring progresses and birds from farther south join up with the ones who have spent their winter here.

The Guardian has a guide to America's five new national monuments, one of which - the Medgar and Myrlie Evers Home in Jackson, Mississippi - has particular meaning for me.

An Interior Department official speaking to a group of companies in the oil exploration business last month lauded our president's skill at sowing "absolutely thrilling" distractions that keep the public's attention away from the administration's efforts to open up large portions of the Atlantic to oil and gas exploration. And so we trade our birthright for one shiny object after another.

Costa Rica has a green new deal plan that could serve as a model for other countries and provide an example of a positive approach to the massive problem of human-caused global climate change. 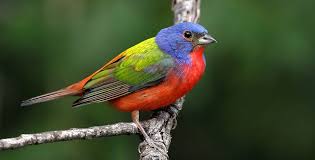 The Painted Bunting is such a gaudy bird that one would think it would be easily tracked and monitored, but, in fact, its migration route and where it spends winters is a bit of a mystery. Scientists are employing tiny geolocators attached to the birds to try to solve that mystery.

The Convention on International Trade in Endangered Species of Wild Fauna and Flora (Cites) is a treaty meant to ensure that trade does not imperil the survival of threatened and endangered species. However, over a quarter of the species threatened by commercial trade, including songbirds like the Black-winged Myna, are not protected by the treaty.

The Prairie Ecologist writes about what we know about managing soil carbon in prairies. Apparently, it isn't enough.

A lesser-known but rather spectacular migration of colorful butterflies is taking place in California. A massive swarm of a billion or so Painted Ladies has been passing through southern California. For most, the destination is Oregon but some go farther north.

A Painted Lady on lantana blossoms in my own backyard.

The fight against encroaching invasive species of plants must be taken to each yard and garden. Many such plants are introduced to the ecosystem because they are planted in landscapes by householders and their landscapers.

Vision is the most important sensory system for birds, and it is more highly developed in birds than any other vertebrate, including humans.

More than 1,200 species of birds, mammals, and amphibians worldwide face almost certain extinction without conservation intervention, according to new research.

Many Native American tribes do not have legal recognition by the federal government and must struggle to maintain their cultural heritage and to protect their lands and ecosystems. California is a leader in seeking to address the problem.

On Friday, the government moved to allow more oil and gas drilling, mining, and other activities on land protected for the threatened Sage Grouse. Such activity would almost certainly disrupt the struggling species' breeding and further threaten its continued existence.

Elizabeth Hargrave has a passion for birds and for game playing. She put the two together and invented a board game called Wingspan. The game was published Friday by Stonemaier Games and is available to the public. The game's scientific integrity is based on information collected by eBird.

Mowing or pruning back milkweed during the growing season increases its bushiness and makes it more useful for Monarchs and other milkweed butterflies that depend on it.

I gave up on broadcast news three years ago. I no longer listen or watch - I get my news through other trusted sources. And here's one of the reasons why I find broadcast news utterly useless: Climate change is an existential threat to this planet. You would think that a "news" organization might take note of that. In fact, the coverage of the problem by radio and television news is getting worse. Much worse. In 2018, climate change coverage decreased by 45 percent over the previous year! By this time next year, it won't even get a mention.