Poetry Sunday: The Facts of Art by Natalie Diaz

October 07, 2018
The MacArthur Grants, the so-called "genius grants," were announced last week. There, tucked away on the list of twenty-five recipients of the grants, all those scientists and activists, was the name of a poet, Natalie Diaz. I was intrigued.

Natalie Diaz was not a name that was known to me and so I had to learn about her. Her familial and cultural background is Mojave and Latina. She is an enrolled member of the Gila River Indian Tribe and an associate professor in the Department of English at Arizona State University. She uses her personal background as a source to create a personal mythology that conveys "the oppression and violence that continue to indigenous Americans in a variety of forms."

I read several of her poems and was moved by them all. Violence, both societal and individual, is a continuing theme in her writing. This poem, "The Facts of Art," explores a clash of cultures on the mesas of Arizona and the violence through lack of understanding and respect that a dominant culture can do to another.


The Facts of Art

by Natalie Diaz
The Arizona highway sailed across the desert—
a gray battleship drawing a black wake,
halting at the foot of the orange mesa,
unwilling to go around.

Hopi men and women—brown, and small, and claylike
—peered down from their tabletops at yellow tractors, water trucks,
and white men blistered with sun—red as fire ants—towing
sunscreen-slathered wives in glinting Airstream trailers
in caravans behind them.

Elders knew these bia roads were bad medicine—knew too
that young men listen less and less, and these young Hopi men
needed work, hence set aside their tools, blocks of cottonwood root
and half-finished Koshari the clown katsinas, then
signed on with the Department of Transportation,

were hired to stab drills deep into the earth’s thick red flesh
on First Mesa, drive giant sparking blades across the mesas’ faces,
run the drill bits so deep they smoked, bearding all the Hopi men
in white—Bad spirits, said the Elders—

The blades caught fire, burned out—Ma’saw is angry, the Elders said.
New blades were flown in by helicopter. While Elders dreamed
their arms and legs had been cleaved off and their torsos were flung
over the edge of a dinner table, the young Hopi men went
back to work cutting the land into large chunks of rust.

Nobody noticed at first—not the white workers,
not the Indian workers—but in the mounds of dismantled mesa,
among the clods and piles of sand,
lay the small gray bowls of babies’ skulls.

Not until they climbed to the bottom did they see
the silvered bones glinting from the freshly sliced dirt-and-rock wall—
a mausoleum mosaic, a sick tapestry: the tiny remains
roused from death’s dusty cradle, cut in half, cracked,
wrapped in time-tattered scraps of blankets.

Let’s call it a day, the white foreman said.
That night, all the Indian workers got sad-drunk—got sick
—while Elders sank to their kivas in prayer. Next morning,
as dawn festered on the horizon, state workers scaled the mesas,
knocked at the doors of pueblos that had them, hollered
into those without them,

demanding the Hopi men come back to work—then begging them—
then buying them whiskey—begging again—finally sending their white
wives up the dangerous trail etched into the steep sides
to buy baskets from Hopi wives and grandmothers
as a sign of treaty.

When that didn’t work, the state workers called the Indians lazy,
sent their sunhat-wearing wives back up to buy more baskets—
katsinas too—then called the Hopis good-for-nothings,
before begging them back once more.

We’ll try again in the morning, the foreman said.
But the Indian workers never returned—
The bias and dots calls to work went unanswered,
as the fevered Hopis stayed huddled inside.

The small bones half-buried in the crevices of mesa—
in the once-holy darkness of silent earth and always-night—
smiled or sighed beneath the moonlight, while white women
in Airstream trailers wrote letters home

praising their husbands’ patience, describing the lazy savages:
such squalor in their stone and plaster homes—cobs of corn stacked
floor to ceiling against crumbling walls—their devilish ceremonies
and the barbaric way they buried their babies,
oh, and those beautiful, beautiful baskets. 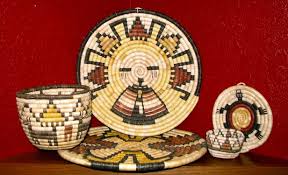