February 23, 2018
A roundup of the week's news of birds and the environment: 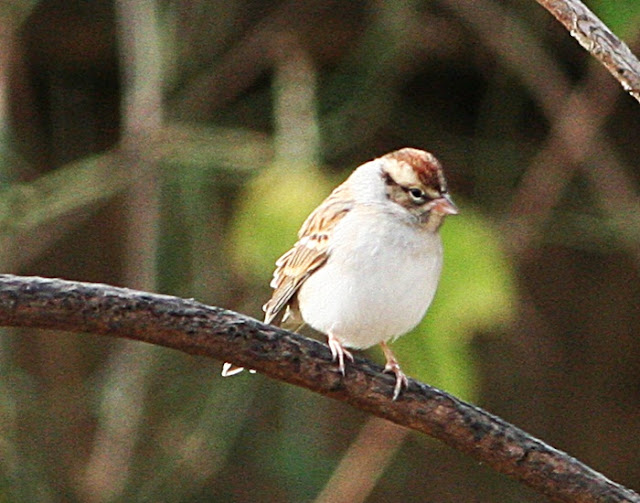 Chipping Sparrows are always welcome winter visitors in my garden.

There were record high temperatures this week along the East Coast, including an 80 degree day on February 21 in Newark, New Jersey, that made that the highest temperature ever recorded there in the month of February.

In July of last year, part of the Larsen C ice shelf on the Antarctica peninsula split away revealing an ecosystem below it that had been hidden for 120,000 years. Now scientists are racing to explore the marine life revealed by the calving of the ice shelf. 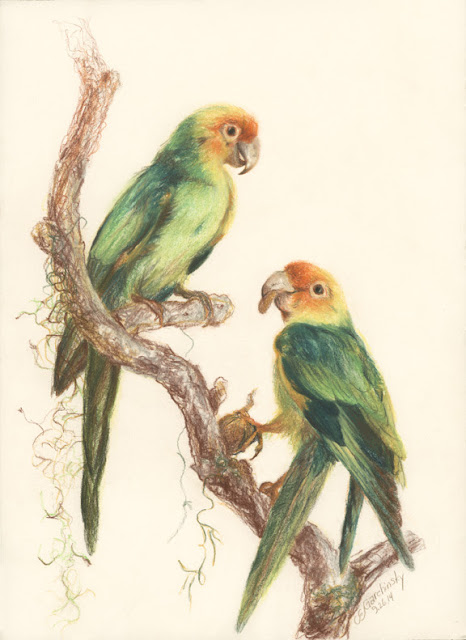 Image from the Academy of Natural Sciences.

This week was the 100th anniversary of the extinction of the Carolina Parakeet, a bird once so numerous that flocks in flight blotted out the sun. If such a population can be utterly extinguished, perhaps the lesson for us is that anything can be. Even us.

It sometimes seems that the aim of the current administration in Washington is to destroy everything that has been protected by previous administrations. In this endeavor, no one has been more effective than the head of the Environmental Protection Agency, Scott Pruitt. He is systematically dismantling the agency and making it impossible to continue its purpose of protecting the environment.

There is hope, however, in the fact that the administration has often been "sloppy and careless," in the words of one critic, in its assault on environmental rules. A cascade of court standoffs are beginning to slow and even reverse the EPA rollbacks, thanks to what has been characterized as the administration's "disregard for the law."

Did American Flamingoes once roam wild in Florida? They have been showing up there over the past 70 years, but many have argued that these are escapees from zoos or wildlife parks. Others make the case that they could be a returning population from Mexico, Cuba, or the Caribbean and that they are simply reclaiming a lost part of their natural territory.

The U.S. Climate Alliance is a group of states that has banded together to  commit to continuing to honor the Paris Climate Accord, in spite of the fact that the federal government has chosen to trash it. This week New Jersey joined the alliance.

And, in other news of resistance to the climate change deniers, more than one million trees have been pledged for "Trump Forest," an effort by environmentalists to offset the president's curtailing of Obama-era clean energy initiatives by planting ten billion trees around the globe.

A project called Safe Wings Ottawa will be exhibiting a thousand dead birds at Ottawa City Hall on Monday, February 26. They are the bodies of birds that died in collision with the glass windows of buildings in the city in 2017. All were collected by volunteers. The aim of the exhibit is to bring attention to the problem of glass for birds; they can't see it and crash into it. The hope is that it will encourage innovation in finding solutions to the problem.

Coffee plantations are good habitats for a diversity of bird species, as long as the coffee is grown in shade under larger trees. 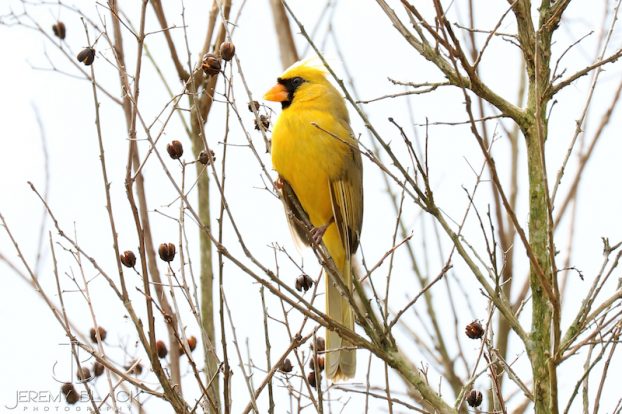 Image from the Shelby County Reporter.

It's a male Northern Cardinal but it isn't red. It is a bird with a rare pigment mutation that causes its feathers to be yellow. It has been making appearances in Shelby County, Alabama recently where it has been photographed by several birders.


The tropical island nation of Seychelles will create two huge new marine parks in return for a large amount of its national debt being written off, in the first scheme of its kind in the world. Swapping debt for dolphins and other sea life is an innovative plan that offers a win-win for the country and for the environment.
*~*~*~*
The Moas of New Zealand are long extinct, but a study of their fossilized droppings has given clues as to the extent to which they shaped the native landscape of the island by assisting in the spreading of fungi, which was one of their favorite foods.
*~*~*~*
A tick that is native to Asia has been found on sheep in New Jersey. It is not clear how the insects came to be there, but they represent a potential threat of becoming another invasive species.
*~*~*~*
With the rise of sea levels on one side and the encroaching industrial and housing development on the other, California could be in danger of losing its salt marshes, an important habitat for many endangered species.
weekly roundup