February 09, 2018
A roundup of the week's news of birds and the environment: 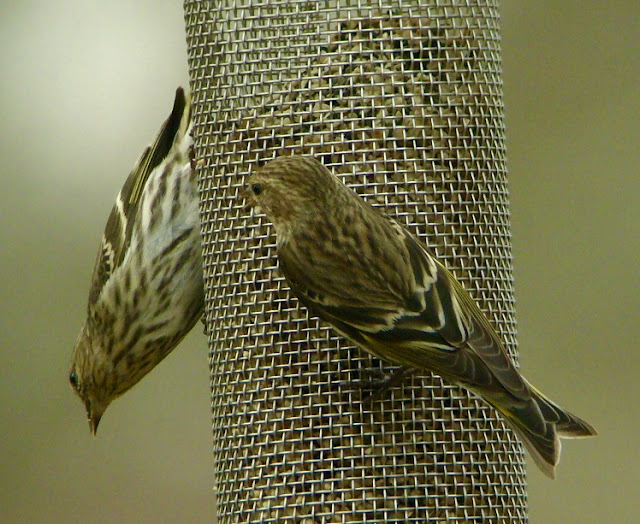 Pine Siskins having a meal at my backyard feeder today. Siskins will be one of the species I'll be looking for next weekend during the Great Backyard Bird Count. Have you signed up to count? If not, never fear; there's still time. The count is always held on Presidents Day weekend. It starts on Friday and runs through Monday and it is a great way to become more familiar with the birds in your neighborhood.

Birds don't understand glass which is why they tend to fly straight into it and why large buildings with lots of glass are such death traps for birds. That most definitely includes U.S. Bank Stadium, home of this year's Super Bowl. It is the cause of more bird deaths than any other building in Minneapolis.

The toad thought he had found a tasty meal, but once inside the amphibian's stomach the beetle exploded and was expelled and lived to fly another day. That is the modus operandi and the defense mechanism of the bombardier beetle and Japanese scientists have managed to capture footage of the insect's great escape. Perhaps most surprisingly, they were even able to hear the explosion inside the toad!

The famous Washington, D.C. Bald Eagle pair, named Liberty and Justice, are nesting again and have laid their first egg. There is an eagle cam trained on the nest so you can watch the action through egg-laying, brooding, and, if everything goes well, hatching and raising the chicks.

Outside online magazine has put together a timeline of the current administration's regulation rollbacks and revoked protections of the nation's public lands.

Nature finds a way and that includes domesticated animals that are returned to Nature. Even the abandoned pet dogs of Chernobyl learned to survive when they were left behind in the contaminated exclusion zone around the nuclear reactor. They have formed their own society and their descendants continue to live there.

Wetland plants are often dispersed from one site to another through the medium of duck feces. Thus, ducks become important vectors in the spread of such plants and they help to encourage the production of the plants which they find desirable to eat.

Migratory birds use a magnetic compass in their eye for navigation. The involved sensory mechanisms have long remained elusive, but now, researchers believe they have located exactly where in the eye avian navigation is situated. There is one specific part of the retina - the outer segment of the double-cone photoreceptor cells - which makes the navigation possible.

The precipitation total in January over the contiguous United States was 1.81 inches, which is 0.50 inch below the 20th century average, tying it for the 21st driest January on record. Drought intensified and expanded across parts of the West, Southern Plains, and Southeast.

Wilderness study areas are more wild and untouched than national parks. But a bill introduced in early December threatens this unique terrain, environmentalists say. It would eliminate wilderness protection from the Big Snowy Mountains of Montana as well as from another 358,500 acres in Montana that have been shielded from development since the 1970s, opening the way for development of the areas.

"The Prairie Ecologist" writes about the importance of diversity, redundancy, and resilience in the continued survival and thriving of the prairie.

Researchers have shown that Great Spotted Woodpeckers of Europe may be able to recognize one another by the individual pattern of their drumming.

"The Incidental Naturalist" tells us about a pint-sized poisoner - the green and black poison dart frog.

There are more than 2,500 sites that handle toxic chemicals and that are located in flood-prone areas in the United States. Several of them are located in the Houston area where, last summer, Hurricane Harvey caused deadly chemicals to be released into waterways.

Small birds are more energy-efficient than bats when flying, which is important for their ability to make long-distance migrations. Researchers are identifying some of the mechanisms behind their energy-efficient flight. 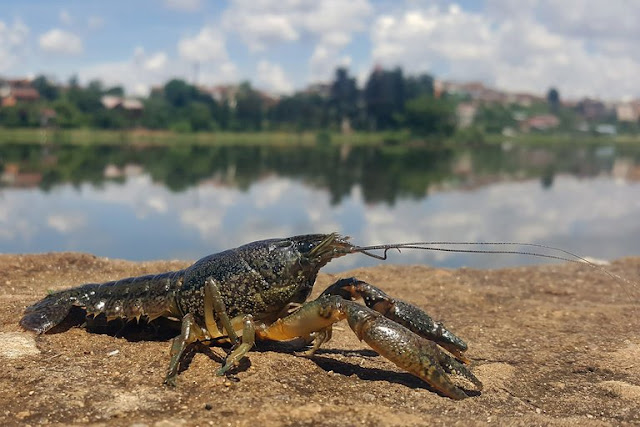 Image from The New York Times.
Here's a creature for your nightmares - a mutant crayfish that is able to clone itself. It is a six-inch-long critter called the marbled crayfish that appears to have developed as a species only twenty-five years ago. Apparently, a drastic mutation in a single crayfish produced the marbled crayfish in an instant and now its population is exploding across Europe.
weekly roundup