August 26, 2017
A roundup of the week's news of birds and the environment: 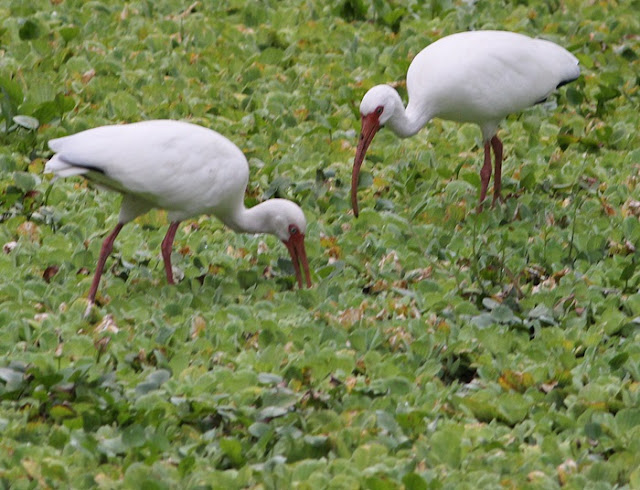 These White Ibises were searching for a meal in a swampy area at Brazos Bend State Park. That swampy area most likely has a lot more water in it today.

The biggest environmental story of the week is happening all around me as I type. Hurricane Harvey made landfall as a category 4 near Rockport yesterday evening and dumped rain over a wide area of Southeast Texas overnight. The flooding and devastation caused by the storm is expected to be substantial, but of course we won't know the full extent for several days. Harvey is projected to stall and sit over our heads for a few days. Our rain gauge showed that we got 3.25" of rain overnight, but some areas of Houston got as much as six, while areas farther south probably got even more.

Migration is well underway and there has been a steady stream of hummingbirds through my yard this week. Gulf hurricanes are just one of the challenges that fall migrating birds, including the tiniest ones, face on their way south. At least the endangered Whooping Cranes are not in the storm's path. They will be arriving in the Rockport area beginning in October and are likely to find a somewhat changed landscape.

On a personal note, we and our family are all fine. We saw the storm coming and prepared as best we could. If the projections turn out to be correct, we'll all be all right. I appreciate the expressions of concern that I've received here and on social media.

The big celestial event this week was, of course, the solar eclipse and birders were out and about not only to watch the moon blot out the sun but to see what birds did in response. They reported their findings on eBird.

Secretary of the Interior Ryan Zinke this week recommended shrinking 27 national monument sites. There is considerable legal doubt over the power of the executive branch to do this and any effort to change the sites will undoubtedly be challenged in court.

Thousands of Atlantic salmon have escaped from a fish farm in the state of Washington, raising fears of an environmental disaster if the fish survive and reproduce. They could compete with the native fish of the area and become another invasive species.

The president of Brazil has abolished a huge Amazonian reserve covering an area the size of Denmark in what critics term the biggest attack on the Amazon in fifty years. The species-rich forest will be opened up to mineral companies, road builders, and other development activities.

A 40-acre brush fire in Montana was started when a hawk swooped down to snatch a snake and, as it flew back up, the wriggling snake touched a power line causing the two animals to be electrocuted and creating a spark which set the grass and undergrowth alight.

A commercial Russian LNG tanker has traversed the Arctic route from Europe to Asia without the protection of an ice-breaker for the first time in history. Rising Arctic temperatures are melting the ice and making the passage possible. The passage took six-and-a-half days.

The U.S. Court of Appeals in the District of Columbia has ruled that U.S. regulators assessing new gas pipelines must try to analyze their potential to increase greenhouse gas emissions before giving them the go-ahead. The decision could have far-reaching effects on infrastructure projects, according to industry representatives and environmentalists.

The idea of building a border wall is not popular with most residents along the Texas border and, last weekend, a broad coalition of environmental and immigrant-rights organizations staged a weekend of protests in Texas’s Rio Grande Valley in response to recently released maps outlining planned border wall locations. Organizers believe the events represented the largest grassroots movement to date in opposition to one of the president's most divisive policy priorities.

The seabird colonies of the UK, especially those in northern Scotland, have suffered precipitous declines over the years. The theory is that warming waters have driven their prey to other areas of the ocean and so the birds have had to move, adjust, or die. That's the theory, but environmentalists say a thorough study is needed in order to assess the situation and determine its causes. They blame the government for failing to institute such a study.

The fourth National Climate Assessment, a federal synthesis of climate science required every four years by law, says temperatures have risen rapidly since the last report was published in 2014. After setting a record that year, global temperatures shot to a new record by a wide margin in 2015 followed by another record last year. The report predicts that U.S. temperatures will rise at least 2.5 degrees Fahrenheit over the next few decades, with cities experiencing much hotter temperatures. The East will get wetter, and the Southwest drier.

Alaska's permafrost is no longer permanent. It is thawing due to the effects of global warming. It is both an effect of the warming and will be a cause of future warming as more carbon dioxide is released by the melting.

A researcher at the University of California is studying bumblebees to figure out what role climate change, poor nutrition, and vulnerability to pesticides and parasites play in bee declines. The information they gain could help people working to save bees. 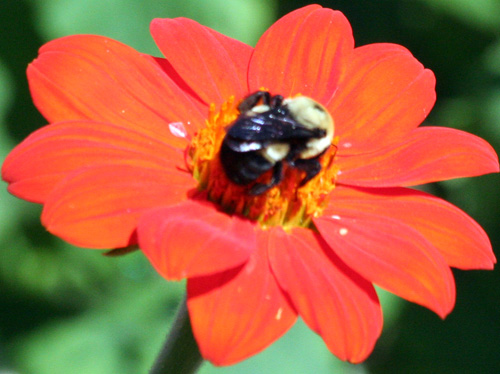 Long may you buzz, Bumble.