February 09, 2013
Fox News does it again, spreading disinformation to its vast audience of gullible souls.

It is part of their remit, of course, to be totally opposed to any source of energy which does not pollute the atmosphere, so we should not be surprised that they scoff at the whole idea of solar energy. You can't depend on the sun, they say. Some days it is cloudy.

When it is pointed out to them that other countries are moving ahead quite successfully with solar energy projects, their "experts" will explain that it is because those countries are much sunnier than the United States. Sunny, sunny Germany, for example.

When asked why Germany is doing so much better than the United States in this field,  Fox Business reporter Shibani Joshi explained, "They're a smaller country, and they've got lots of sun. Right? They've got a lot more sun than we do." He went on, "The problem is it's a cloudy day and it's raining, you're not gonna have it." Sure, California might get sun now and then, Joshi conceded, "but here on the East Coast, it's just not going to work."

Because in the reality-based world that most of us inhabit, it is very clear that Germany is not a notably sunny country. In fact, if you look at comparison maps of photovoltaic solar resources that are available to the United States, Germany, and Spain, they look like this. 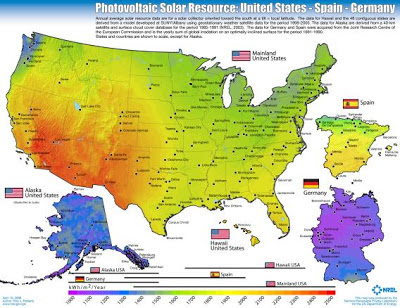 If it's difficult to read, all you really need to know is that the yellow to orange areas represent areas with the greatest amount of solar resources. The blue to violet areas have the least amount of solar resources. All of Germany is blue or violet. Most of the United States, except for Alaska, is in the yellow to orange range. We are more comparable to Spain than Germany.

As of sometime in the first half of 2011, Germany has had over 20% of its electricity supply coming from renewable resources. Solar power peaked at 40% of power demand in Germany last summer. So why are they doing so much better than we are?

Bobby Jindal recently gained notoriety by telling his fellow Republicans that they have to stop being "the stupid party." I would submit that the United States needs to stop being the stupid country when it comes to alternative energy sources. Of course, the truth is that much of that will depend on the Republicans stopping being the stupid party, because it is their obstructionism and obsequiousness to the petroleum industry that is the main obstacle to our moving forward on finding ways to utilize all this non-polluting energy that is just waiting for us.
disinformation Fox News solar energy