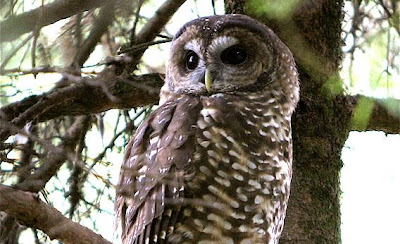 Northern Spotted Owl photographed at the Oregon Zoo. Photo courtesy of Slate.com.
If you are a part of the agency charged with protecting endangered species, what do you do if one of those species is threatened by another species in Nature? If the threatening species is a non-native, invasive species, the answer is clear. Stop the invasive one by any means necessary, including lethal measures. But what if the threatening species is native with, arguably, just as much right to be here as the threatened species? That is the dilemma currently facing the U.S. Fish and Wildlife Service in its decades long battle to try to save the Northern Spotted Owl from extinction. The Northern Spotted Owl first came to the nation's attention in the 1990s when it became clear that if something wasn't done to stop the logging of the old growth forests of the Northwest that were its natural habitat, the bird would be extirpated. After studying the situation and after many rancorous public hearings, as well as clashes in the forests between proponents of logging every last tree and defenders of the owl, the bird was declared an endangered species in 1994 and came under the protection of the Endangered Species Act. This helped to slow its decline. Temporarily.In recent years, another and potentially even more lethal threat to the bird's existence has reared its head. That head has feathers and, in fact, it looks somewhat similar to the Northern Spotted Owl. That's because it is a cousin of that owl. It is the iconic owl of southern swamplands, the Barred Owl.The Barred Owl has been expanding its range for years and now it has made it into the Pacific Northwest and that is bad news for its cousin. The Spotted Owl is a relatively docile, peaceful owl, content to live out its life within its suitable habitat. The Barred Owl, on the other hand, is an aggressive and highly adaptable owl, able to make a living in many different types of habitats. It is a prolific breeder and the search for new ranges for its growing population has led it out of its native southern swamps and across the continent.The problem is the prolific Barred Owl does not peacefully coexist with its endangered cousin. When Barred Owls show up in an area, the Spotted Owls there soon disappear. And now those highly appealing Spotted Owls are again teetering on the brink of extinction. What to do?When the agent of extinction for the owls was human activity, the answer to the morality of the situation was fairly clear: Modify the human activity to ways that do not threaten the creature or stop the activity altogether. But when the agent of change is another native bird simply doing what that native bird does, the answer is a lot less clear. For people charged with protecting wildlife, there is a natural resistance to the idea of killing a wonderful creature like the Barred Owl - killing thousands of the birds, for that's what it would take. And so the debate has raged and, while it rages, the Spotted Owl continues to decline.The Fish and Wildlife Service is nearing a decision and it seems likely that killing Barred Owls is going to be part of their plan. Already their counterparts in British Columbia, Canada, have bitten the bullet, so to speak, and started killing those owls that are within five kilometers of Spotted Owls. The F&WS will probably follow suit.It is a fraught dilemma but we must remember that the Spotted Owl likely would not be in this pickle in the first place had it not been for human activities reducing their habitat to a mere shadow of its former self, and so humans continue to be complicit in the bird's problems. Thus, we must be complicit in its salvation, if that is even possible.As one who grew up with a lullaby of nightly calls of Barred Owls in my ears, it is very hard for me to contemplate the killing of thousands of the birds - or even one of them. But it is also hard to contemplate the final extinction of such a wonderful bird as the Northern Spotted Owl.The only thing is, even if we are able to save this owl from its cousin, the next threat on the horizon is global warming which threatens to finally destroy the bird's remaining habitat. And we seem utterly unwilling to take any steps to save it from that.
Barred Owl Northern Spotted Owl