Public support of the JOBS bill

October 18, 2011
At times it is really hard not to despair at the utter ignorance of a very large section of the American public.  For example, in regard to President Obama's proposed JOBS bill.

A CNN poll recently found that there was lukewarm support for the bill among the public; 43 percent saying they were in favor while 35 percent were opposed, with 22 percent not knowing enough to offer an opinion.  But then, when the pollsters asked the respondents about the individual sections of the bill, the picture changed completely. 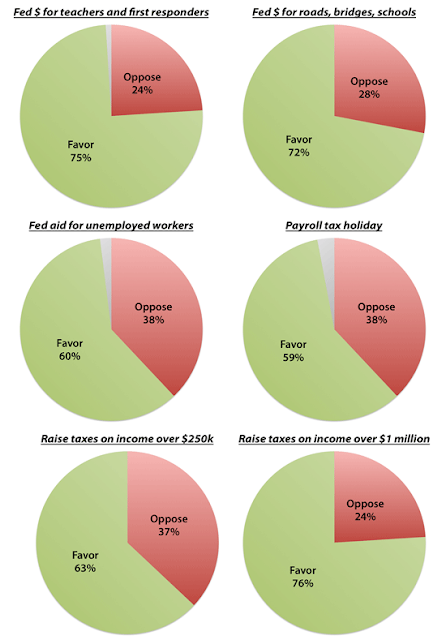 As these graphs from DailyKos clearly reveal, the poll showed that support is overwhelming for the various components that make up the bill!  The least popular component, the payroll tax holiday, still had 59 percent support!

Why doesn't this support show up when people are asked the generic question about whether they support the president's JOBS bill?  Could it have anything to do with the unrelenting attacks against the bill by the right-wing and negative reporting on the president by the mainstream media?  If the mainstream media actually did its job and reported in a straightforward manner about what is in the bill, would people be informed enough to give a positive response when asked if they support it?  We'll never know because the mainstream media will continue to employ its false equivalency strategy of reporting the news, where positive statements about any Democratic proposals or actions must be instantly offset by negative statements from the right-wing about them, whether those negative statements are true or bear any relationship to reality at all.  The result is to so confuse ordinary everyday citizens that they hardly know what to believe any more.

But the Republicans know what they believe!  They believe that any means justify the end of defeating Barack Obama in 2012, and if that includes destroying a bill that might actually help many Americans who are in dire straits because of the economy, well, so be it!  The lives of ordinary citizens are simply collateral damage as far as these Republicans are concerned.  And so, when it came time to vote on a JOBS bill that an overwhelming majority of Americans actually support when they know what is in it: 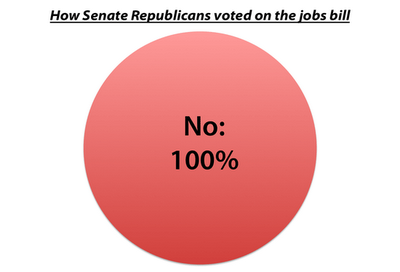 As I say, it is enough to make one despair for our country and for our broken political system.
politics