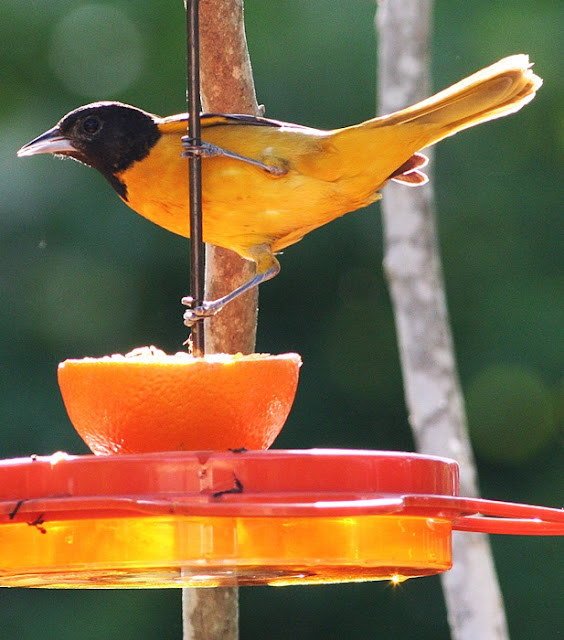 Male Baltimore Oriole on feeder.
The spring migration has continued in full swing this week. When I stepped outside on Monday, the first sound I heard was the unmistakable call of the Yellow-breasted Chat. There seemed to be several of them all around the yard giving their whistles, chuckles, rattles, and squawks. It always makes me smile to hear them. The Great Crested Flycatchers arrived the same day, but the stars of the show had to be the Baltimore Orioles. It's always a thrill when they pass through. Some years the yard has been filled with them, but I've only seen a few this year so far. They do love their oranges as the one in the picture shows.

For Earth Day, The New York Times offered a crash course on climate change on the 50th anniversary of the first Earth Day.

As the price of crude oil collapsed this week, producers were forced to shut down rigs. The shale oil industry is expected to shrink. This would seem like a good time to wind down dependence on fossil fuel and switch to cleaner sources of energy. 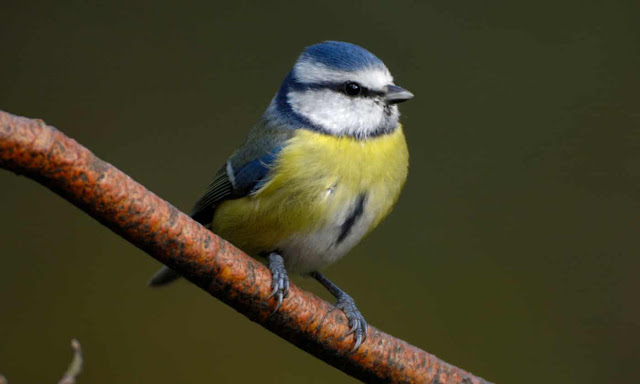 Blue Tit image from The Guardian.
This little bird is a Blue Tit and something very bad is happening to its species in Germany. More than 11,000 instances of sick or dead birds have been reported within the last couple of weeks. A bacterial infection seems to be the cause.

One of the unexpected effects of climate change is an alteration to Nature's soundscape.

The National Oceanic and Atmospheric Administration predicts that there is a 75% chance that 2020 will be the warmest year on record, beating out 2016.

A global study has found that there has been a 25% decrease in insect populations since 1990. Since insects are a vital link in the food chain, this is a very worrying statistic.

Red Knots will be arriving in the Mid-Atlantic area over the next few weeks on their long migration route. Although they come in fewer numbers these days, their migration is still one of the wonders of Nature.

A study of outdoor domestic cats using tracking collars found that they do not stray far from their homes, but they have an enormous impact on wildlife in that area, killing more than their owners are aware of. They have a bigger impact, in fact, than wild predators.

Decades of dam building and water extraction have had an effect on the ecosystem of San Francisco Bay. The ecosystem is collapsing under the weight of the demands made on it.

Would you be surprised to learn that the groups protesting stay-at-home directives are financed by the same people who have been financing climate change denialists? Incidentally, some wags on Facebook have dubbed the protestors the "Flu Flux Klan" or the "Branch Covidians." Seems about right to me.

About 40 million years ago, frogs lived on Antarctica. Of course, it was a lot warmer then. A fossil frog has been found from that period and it appears to be related to modern-day frogs in South America.

A new study traces the evolution of bird brains from tyrannosaurs to modern crows. The study found that those birds that evolved later, like crows and parrots, have bigger brains.

The side-effects of the pandemic on Nature offer a vision of an alternative future of the possibility of a healthier relationship with the natural world.

Tiny primates called tamarins are one of the more charismatic and beloved symbols of conservation in Brazil, where they are building an overpass over a major highway for the little critters to keep them safe from traffic.

A large tree fell in Panama in October 2015 and it took a lot of its neighbors with it. After the clearing of the area, the number of hummingbirds there has increased.

Not all pigeons, or more accurately, Rock Doves, are from the same gene pool. Along the Atlantic Coast, for example, researchers found that there were two distinct populations, the New York branch and the Boston branch separated by Connecticut.
weekly roundup