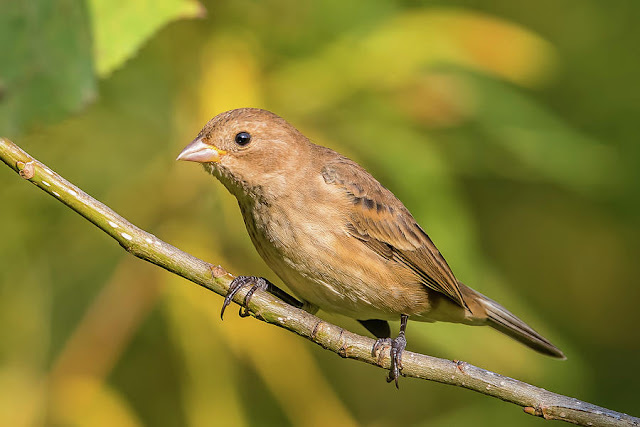 We've had lots of neotropical migrants passing through the yard this week, mainly videos and buntings. On Thursday, a female Indigo Bunting, like the one in the image, dropped in on my little fountain to have a drink and take a bath. She's not as colorful as her bright blue mate, but isn't she a lovely bird?

As our country and the world struggles with the coronavirus pandemic, there has been a bright spotlight on the governor of New York and his daily briefings, and yet New York has in many ways been a tragic example of the price of delaying in response to the warning signs of oncoming disaster. A better example of success has been on the West Coast. California, Oregon, and Washington were hit early by the virus but acted quickly to contain it and now show signs of flattening their curves.

The American Southwest has been in the grip of a drought since 2000 and scientists say it is as bad as or worse than droughts in that region over the last 1,200 years. The difference is that this one has been caused primarily by humans through the agent of climate change.

Perishable foods like milk and eggs are being wasted during this pandemic because of a breakdown in supply lines and a faulty economic system that has allowed the waste to happen.

There is no clear answer to how the COVID-19 virus was generated and initially spread, but it is very likely that when the answer is determined it will trace back to the wildlife trade.

The Museum of the Earth has a virtual exhibit available on bees, diversity, evolution, and conservation.

This year marks the tenth anniversary of the Deepwater Horizon disaster in the Gulf of Mexico and the effects of that oil spill are still damaging the ecology of the region.

The Environmental (non)Protection Agency strikes again. The agency is changing the way it calculates the benefits of mercury controls, a move that will have the effect of loosening the rules on emissions of other pollutants. Mercury is a heavy metal linked to brain damage in humans.

A new study published this month in the magazine Nature indicates that there could be a more abrupt collapse of animal species as a result of climate change than had previously been thought. Instead of being on a downward slope, it could be more like falling off a cliff.

Katharine, a great white shark, was tagged with a tracking device on August 20, 2013, and the public avidly followed tales of her travels for years. There was a ping heard on May 12, 2019, about 150 miles off the coast of Charleston, South Carolina. Then nothing and she was feared lost. Then at the end of March came a faint ping and a few days later on April 4 three more pings were heard. They pointed to a location about 200 miles off the coast of Virginia. So, perhaps she wasn't lost after all. Maybe she was just practicing her social distancing.

A plan to turn marginal cropland in Maryland into a friendlier habitat for Northern Bobwhite Quail is expected to also benefit the Chesapeake Bay by reducing runoff into its waters.

The endangered woodland caribou is further endangered when forests in its habitat are logged out. The logging encourages moose and wolves to move in, one a competitor and the other a predator of the caribou.

The Shore Plover is a rare and endangered New Zealand bird. Recently five of the little shorebirds were transported to a remote predator-free island, in spite of the coronavirus lockdown, to give them a better chance of survival.

Poachers in Africa are freer to move around because of pandemic lockdowns and the absence of tourists and that has meant that more threatened and endangered animals, including rhinos, are being killed. 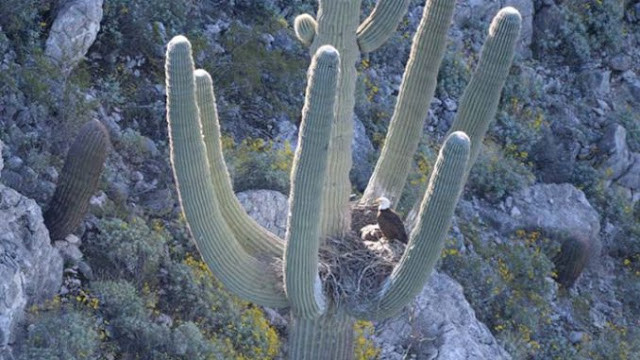 A recent aerial survey for Bald Eagles by the Arizona Game and Fish Department revealed this first-ever documented nest of an eagle in a saguaro cactus.

One of the easiest ways to support conservation and the environment is to plant native plants in your yard. These attract and support local insects and other wildlife and help to strengthen the food chain.

There have been many stories recently about wild animals moving into areas that have been vacated by humans, but there is none more dramatic than this: 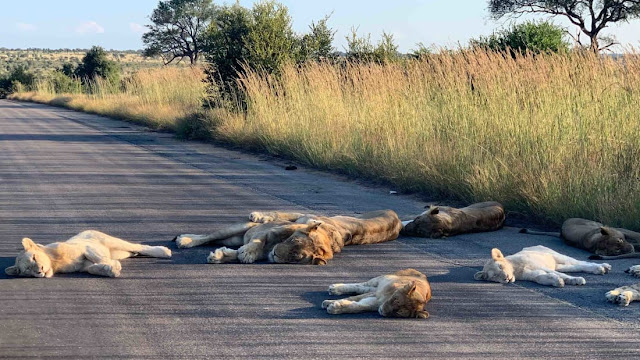 A ranger in South Africa took this picture of a pride of lions settled down for their catnaps on a now-abandoned roadway in Kruger National Park. The ranger was able to get fairly close; the lions were oblivious.
weekly roundup