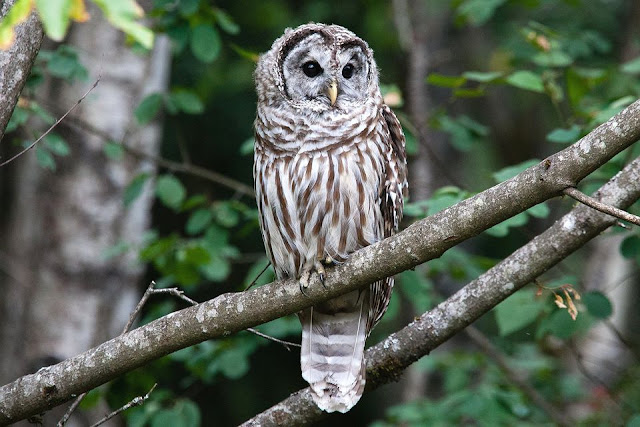 Image from allaboutbirds.com.
All week long there has been a Barred Owl calling from the trees outside our bedroom window around midnight every night. The calls can be raucous at times, but I find them restful. I suppose it reminds me of my childhood when I would fall asleep most nights to the sounds of Barred Owls calling from around the farm. This particular owl has a very distinctive timbre to his voice that makes him easily recognizable, so I'm sure it is the same one every night. He spends several minutes calling from the red oak tree and then he moves on to mark and claim other parts of "his" territory.

From the category of "it's an ill wind that blows no good" news comes word from scientists that, as much of the world is on lockdown and humans are staying indoors, Mother Nature is taking the opportunity for a bit of a renaissance. There are fewer pollutants in the air and the atmosphere over many cities is beginning to clear and blue sky can be seen once again. Wild animals are moving into niches that humans have abandoned, and, with less traffic on the roads, roadkill of animals has been substantially reduced. Wouldn't it be something if one result of the pandemic was that the emission of greenhouse gases was actually reduced this year?

With people staying at home, it is also a great time for them to connect with Nature in their own backyards and become a backyard naturalist.

Birds that are omnivorous and can easily adapt to new foods and new survival strategies are much less likely to go extinct.

Preserving established habitats with mature trees can do more to extract greenhouse gases from the atmosphere than planting new trees can.

The great American suburban love affair with lawns has never been good for the environment, so it's a good thing that more homeowners are looking at rewilding their yards in ways that are more compatible with the ecosystem. 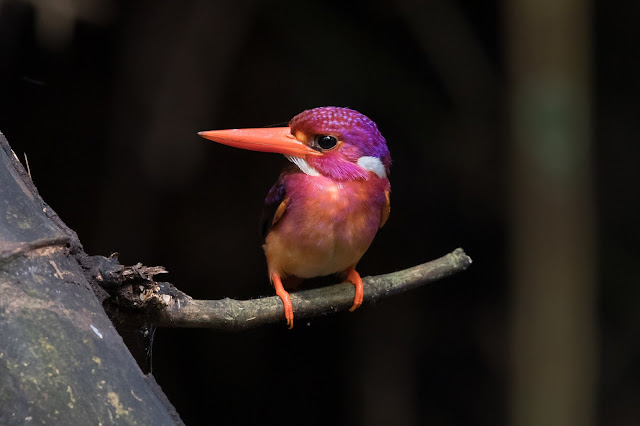 This is the South Philippine Dwarf Kingfisher. It is rare and has proved very elusive and difficult to photograph, but recently a vitreoretinal surgeon and amateur photographer in Mindanao got lucky. He took this photograph of an adult bird as well as a fledgling.

There are four endangered species of fish in the Yampa River in Colorado that could greatly benefit from the closing of coal-fired power plants along the river over the next several years.

A little thing like a pandemic will not be allowed to interfere with the construction of the wall along our southern border. Indeed, it is full steam ahead with the project and the environment be damned.

A study of Brazilian birds revealed that the birds would quickly recolonize a reforested area after fragmentation.

The Great Barrier Reef has suffered its most significant bleaching on record. This event was even worse than the 2016-17 bleaching.

The federal government is considering removing threatened species protections for the lynx. However, studies indicate that the lynx has actually lost population in the Northwest in recent years.

The warming climate will allow more species to invade Antarctica where, until now, the cold has protected the continent from such invasions. The first of the wave seems to be a Patagonian mussel.

Another effect of the pandemic is that food supply chains have been disrupted with the result that a lot of food that would normally go to restaurants and grocery stores is going to waste.

Clever black rhinos! It seems the beasts listen to the alarm calls of Red-billed Oxpeckers to alert them to the presence of humans.

Finally, in an essay, Jane Goodall urges us to take the pandemic as a motivation to establish a new and more productive relationship with the natural world.