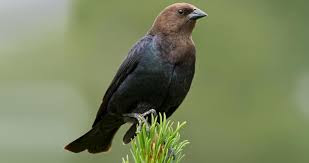 Although they are nest parasites that do considerable damage to some vulnerable species, it cannot be denied that the Brown-headed Cowbird is a handsome creature. This is the male. The female is drabber but still a neat-looking bird. This is the season when we are most likely to see them in our yards and at our feeders.

One victim of the coronavirus pandemic has been several spring birding festivals that have been canceled due to concerns about spreading the deadly virus. This is a disappointment to birders and also a major hit to some local economies that benefit greatly from the ecotourism associated with the festivals. Meanwhile, the National Park Service is, for the most part, keeping public spaces in its care open, often free of charge to visitors, but visitor centers and other spaces where people would normally come in close contact are closed.

After a winter that featured higher than normal temperatures, most weather forecasting entities are predicting a warmer than usual spring right across the continent.

One way to deal with self-quarantining is to get outdoors as much as possible while maintaining one's social distancing. But this is a problem for some people who actually have a fear of Nature and their fear sometimes impedes efforts at conservation. I actually knew such a woman who was completely convinced that everything in Nature was her enemy and out to get her. Every bug, spider, frog, etc., was to be feared. It is a sad and disabling condition.

We know that members of the crow (corvid) family are very intelligent birds. Scientists who study them know that the birds react strongly to the death of one of their species. But what are the birds actually thinking when confronted by such deaths?

Removing dams from waterways is very much in vogue these days, facilitating the migration of fish and returning to waterways to a more natural state.

Yet another hopeful trend in conservation has been the development and opening of wildlife corridors to allow animals to pass safely past busy highways.

Birds' nests may sometimes appear to be a disordered mess of materials to the human eye, but, in fact, they are marvels of engineering.

The chytrid fungus has devastated many populations of amphibians around the world, but it turns out that some toads are actually able to cure themselves of the fungus.

New Zealand's endangered Kākāpō, also known as the world's fattest parrot, was on the verge of being wiped out by the deadly disease, aspergillosis, but dedicated veterinarians have been able to save most of the birds and preserve the vulnerable species for another day.

In the wake of the devastation of Italy by the coronavirus, Venice has been deserted by tourists and other human traffic and that has left the gate open for the return of Nature. Nature has not hesitated. It has moved into the spaces left empty.

According to a report published this week, the migration of Monarch butterflies to Mexico was down by 53% this winter.

As the Arctic experienced its hottest year on record, the Greenland ice caps lost up to 600 billion tons of ice, enough to raise sea levels by 2.2 millimeters over a period of just two months.

In a related concern, scientists are increasingly worried about the carbon being released by melting permafrost located mostly in the Arctic and sub-Arctic.

The blog, Awkward Botany, has a history of how apples were dispersed, both historically and recently, around the planet by humans and other megafauna.

By utilizing electronic tracking data from seabirds and sea mammals, scientists are attempting to identify biodiversity hotspots in the Southern Ocean.

We know that the white rhinos in Africa are categorized as near-threatened, primarily because of poaching to secure their impressive horns, but there is some good news about their cousins the black rhinos. Their numbers are actually increasing as some have been relocated to safer areas and law enforcement protecting the remaining animals has been strengthened.
weekly roundup