January 31, 2020
A roundup of the week's news of birds and the environment: 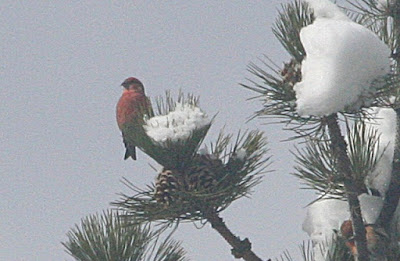 I photographed this Red Crossbill at Rocky Mountain National Park in late October after an early snow a few years ago. There were several of the birds in this pine tree. You may be able to discern another one just in the lower right corner.

So, a 30-foot section of the border wall between the U.S. and Mexico was blown into Mexico by a 30-plus mph wind this week. And in other wall news, it seems that the structure is vulnerable to flash floods which are a regular feature of the "rainy" season in the desert. Consequently, it will be necessary to have large storm gates to allow the water (and, incidentally, migrants) to pass and the gates will have to be open for months.

The unprecedented bush fires in Australia have released about 400 million tons of carbon dioxide, effectively doubling the country's greenhouse gas emissions for the year.

Sadly, the story that I reported here last week has ended just as had been feared. The body of butterfly conservationist, Homero Gómez González, was found on Wednesday, two weeks after he had gone missing in Michoacán state in Mexico.

The oldest asteroid crater yet to be discovered on the planet has been found in Australia. It is roughly 2.2 billion years old and the impact may have been instrumental in ending an ice age.

And in other news of our ancient planet, dozens of footprints of dinosaurs and other creatures were left in a field of lava in what is now South Africa. The footprints were made before the Gondwana supercontinent broke up some 180 million years ago. Interestingly, some of the footprints were from a tiny critter which was the ancestor of mammals.

The technology to prevent avian fatalities from window strikes is available. Adopting bird-friendly materials and building methods could help to prevent the deaths of many of the estimated one billion birds that die in these collisions in North America each year.

But, as we know, there are those among us who are perfectly okay with the incidental killing of birds. A hunter shoots a Whooping Crane thinking it's Snow Goose? No problem, no penalty. BP leaks millions of tons of oil into our Gulf waters killing untold numbers of birds, fish, and sea mammals? Not to worry BP; our federal government has your back. This administration acted this week to implement their plan to weaken the Migratory Bird Treaty Act of 1918 and thereby put millions of our birds in danger.

It is likely that insects and other invertebrates are among the hardest hit of the creatures that have been impacted by the Australian bush fires.

Bats coexist with many types of viruses, including most likely the coronavirus now spreading through China and threatening other parts of the world. What is it about their immune system that allows them to do that? Though they may be able to laugh at viruses, other things are causing many bat species to become threatened or endangered, including the Little Brown Bat and the Big Brown Bat. They have their champions, though, including the Girl Scouts who want them to be the official mammal of Washington, D.C.

Albatrosses have been drafted into the battle to make sure that fishing vessels have the required transponders working so that they can be tracked. Researchers have outfitted 169 of the seabirds with radar detectors that allow them to determine if a vessel's transponder has been turned off.

Orchids are difficult plants to protect in the wild because of their popularity with collectors that makes them targets of illegal trade, plus their habitats are being destroyed right around the world. 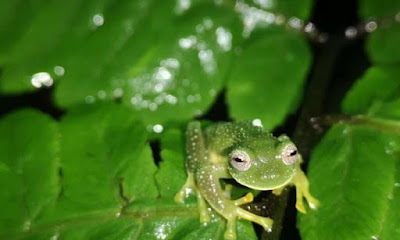 Bolivian Cochran Frog, one of the "glass frog" species which have transparent bellies.

A rare species of frog called the Bolivian Cochran frog has been found in that country for the first time in 18 years.

Dragonflies and damselflies look somewhat similar and might even be mistaken for each other, but they have very different methods of stalking their prey.

If there is any good news coming from a wildfire, it might be that some plants actually do better after such fires. For example, the narrow-leafed purple coneflower of the prairie produces more seeds after a fire.

A triumph of the Endangered Species Act has been the rewilding of the gray wolf in Yellowstone National Park which began twenty-five years ago. The reintroduction of wolves has reversed the degradation of the ecosystem in the park. And it is quite likely, according to some recent research, that some of those wolf pups in the park would retrieve your ball for you if you tossed it their way!

In another example of a state acting when the federal government abdicates its responsibility, New Jersey will become the first state to require that builders take into account the impact of climate change, including rising sea levels, in order to win government approval for projects.
weekly roundup