November 01, 2019
A roundup of the week's news of birds and the environment: 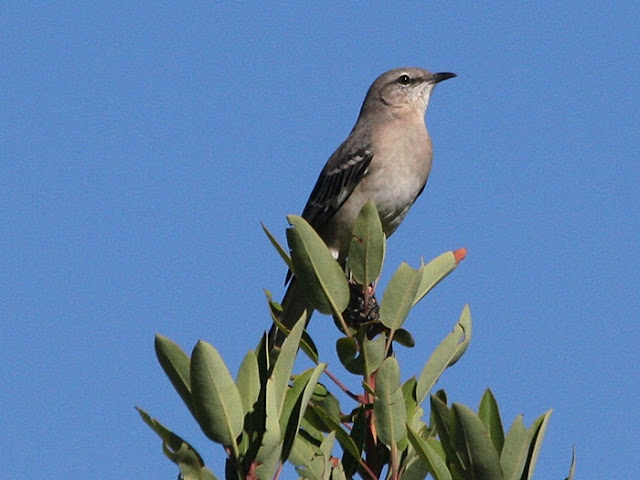 The resident Northern Mockingbird keeps a keen eye on his domain.

The controversial Keystone pipeline has leaked 383,000 gallons of oil in North Dakota, coating an estimated half-acre of wetland. The spill began on Tuesday night and has now reportedly been contained. Emergency crews are working to clean up the oil which would fill about half of an Olympic-sized swimming pool.

The EPA disbanded the group of scientists that made up its Clean Air Science Panel, but the scientists kept working in spite of that and they have now issued a report on their findings. They have discovered that particle pollution regulations are not adequately protecting public health and there are other worrying trends at the EPA.

One idea to help with preventing/fighting California's wildfires and energy blackouts is to decentralize energy sources and utilize more solar panels and microgrids.

Russian scientists are currently tracking thirteen Steppe Eagles via transmitters attached to the birds. The birds breed in Russia and Kazakhstan but winter in South Asia. One of the birds recently passed into Iran and its transmitter sent hundreds of backlogged text messages, draining the researchers' phone credit for the project!

Murray Energy Corporation has become the eighth coal company to file for bankruptcy this year. The bankruptcies are a sign that market forces are pushing the companies out of business, as more and more coal-fired power plants close and utilities turn to renewable sources for their energy.

California Condors have reached a major milestone in their recovery. With the fledging of this year's chicks, there are now more than 100 of the big birds in Big Sur, California.

Wildfires have been a problem in Australia, too. Conservationists fear that hundreds of koalas may have perished in fires that razed prime habitat on the country's east coast.

Rising sea levels could erase some of the world's great coastal cities by 2050 and could displace as many as 150 million people, according to the authors of a paper on the subject that was published this week in the journal Nature Communications.

Not all invasive species are necessarily detrimental to the environment. In Florida, overrun by so many harmful non-native species, the feral parrots that make their homes there seem to coexist with native birds without competition or interference.

New research points to Botswana as the ancestral home of modern humans; however, not all scientists agree with the conclusions of the researchers. The theory is based on DNA analysis and the dissenting scientists counsel caution about using modern genetic distributions to infer exactly where ancestral populations were living 200,000 years ago.

Chimney Swifts are declining, possibly in part because of the absence of open chimneys where they can nest. Concerned conservationists are encouraging the use of fake wooden chimneys that would provide nesting places and migration motels for the birds, and many people across the country are responding by putting the structures in their yards.

An unusually rich trove of early mammalian fossils has been found in Colorado. The great variety of the fossils is giving clues as to how tiny mammals from the age of dinosaurs evolved into larger creatures once the dinosaurs were gone.

Update: Currently playing on PBS's great Nova series is a documentary about this discovery. It is fascinating. Here's a link.

After the destruction of Hurricane Dorian, a birding group touring Grand Bahama has found many fewer birds than were present there before.

Texas is home to four quail species: Northern Bobwhite, Gambel's, Scaled, and Montezuma. All of them are declining possibly due to a combination of causes including drought, land-use changes, land fragmentation, habitat loss, human-wildlife interface issues, invasive species, insecticides, diseases, and parasites.

"Bug Eric" reports on his survey of one house in one night in Door County, Wisconsin, during which he found seventeen spider species! Remember: Spiders are our friends. Let them live.