October 19, 2019
A roundup of the week's news of birds and the environment: 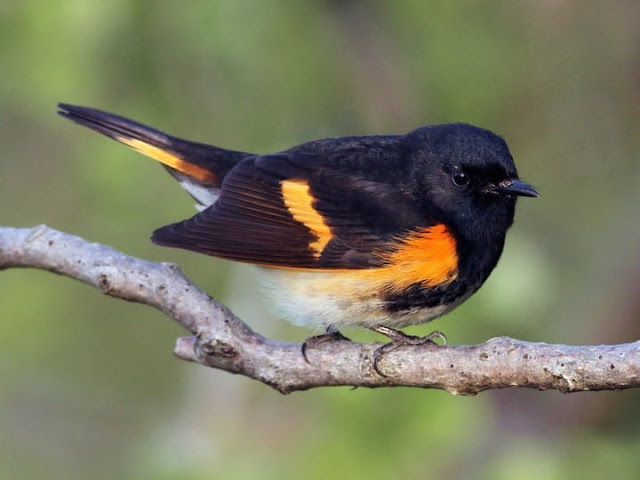 I was sitting on my favorite bench by my goldfish pond yesterday, daydreaming in the autumn sun, when I sensed movement in the redbud tree beside the pond. I looked up to see an adult male American Redstart perched on a twig looking at me, probably trying to decide if I was a threat. I sat perfectly still and tried to look non-threatening and soon he dropped down to my little fountain near the pond to have a drink. I was very excited because this was the first redstart I had ever seen in my yard. (Of course, as always happens with these serendipitous sightings, I didn't have a camera with me, so I had to borrow an image from the internet.) The redstarts and their fellow warblers, as well as other songbirds, are passing through and over my yard now in their fall migration, most of them headed farther south to Mexico and Central America. Their passage is mostly silent unlike in their spring migration when they announce their presence with a song. And so the only way I notice them usually is if I happen to see their movement in the trees. With the redstart, I was lucky enough to be in the right place at the right time.

It's been another devastating summer for seabirds in Alaska. Thousands of carcasses of the birds have washed up on shore there. More than 9,200 of the bodies were collected. Many of the birds were Short-tailed Shearwaters. The deaths coincided with a marine heatwave but scientists are not certain yet of the cause of the deaths. These die-offs have historically occurred from time to time, but for the last five years, they have occurred annually.

The administration in Washington announced its proposal for allowing logging in Tongass National Forest in Alaska, the largest intact temperate rainforest in North America. Conservation groups will continue to fight in court to stop the plans.

What a very good idea! In Iowa, farmers are planting strips of native prairie among their row-crops to serve as buffers, edge of field filters, and incidentally, provide habitat for butterflies, native bees, and other pollinators and small mammals. The idea is a project of an organization called STRIPS (Science-based Trials of Row-crops Integrated with Prairie Strips) at Iowa State University.

Barnacle Geese are one of the bird species that are thriving in a world of changing climate. Their strategy has been to move their nesting area farther north.

A federal judge has blocked the current administration's plans to lift protections for the Greater Sage-Grouse. The judge agreed with conservation groups that the administration's industry-friendly plans were illegal and restored stronger protections.

A mysterious affliction is causing a die-off of freshwater mussels at various sites around the country. The die-offs seem to happen quickly and to only affect the mussels. Scientists are puzzled as to the cause.

A Hawaiian thrush called a Puaiohi is endangered and a study concluded that the best way to protect it and give it a chance to increase was to eradicate the invasive rat population. That would be a boon to many native island species.

The endangered Red-cockaded Woodpecker's adaptation to climate change has been to begin to change its nesting time. Also, birds that are located farther to the north in the species' range seem to be doing better than birds farther south.

The blog "Backyard and Beyond" makes the case against the imported honeybee, pointing out that "saving the honeybee" seems to suck all the oxygen from the room while we would be much better off trying to save our native bees.

The glass facade of the NASCAR Hall of Fame in Charlotte, North Carolina has proved a death trap for Chimney Swifts. More than 300 of the birds crashed into the windows on a recent night.

There are some very fast ants living in the sand dunes of the northern Sahara. Perhaps the blistering heat has something to do with it. Researchers clocked the ants at speeds approaching one meter per second! 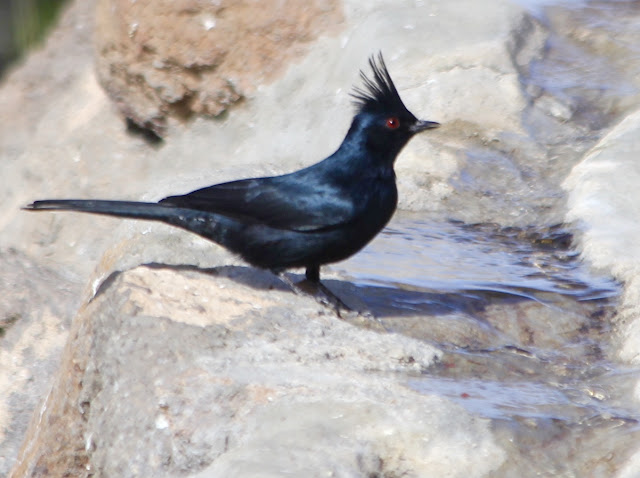 Phainopeplas, like this one that I photographed in the Chihuahuan Desert of West Texas, practice something called itinerant breeding. They nest at one site and then migrate somewhere else and nest there. It is a rare breeding strategy practiced by only a few documented species.

New research shows that dust from an asteroid break-up that blanketed the planet some 470 million years ago may have been the event that triggered major increases in the number of animal species.

For those who don't like to rake the fallen leaves of autumn, here is an argument you can use: The autumn leaves provide winter cover and protection for many small species and help to protect and increase biodiversity.

The problems caused by climate change are so enormous and daunting that one becomes discouraged and despondent that anything can be done to reverse it. Specifically, it is discouraging to think that we as individuals can't do anything. But is that really true? Do not even the small steps that we can take begin to have some effect in the great scheme of things when added to all those other small steps taken by people everywhere? Margaret Renkl explores "The Case Against Doing Nothing".