The Dutch House by Ann Patchett: A review 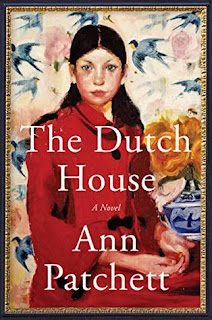 The main character in The Dutch House is the house itself. It looms over the lives of the human characters and haunts them to the very end of their days.

The house was built in a suburb of Philadelphia by a Dutch couple, the VanHoebeeks, who had made a fortune in a cigarette distribution business that they started before World War I. The facade of the house was glass; you could look right through it. The lives of the people who lived in it were never so transparent.

The VanHoebeeks raised their family there, but it was a family stalked by tragedy and by post World War II years, the only family member left was the mother who was cared for by a servant, Fiona (later nicknamed Fluffy). When the mother died, the house reverted to ownership by a bank and it was sold.

The buyer was Cyril Conroy, a man who had grown up poor but through a combination of acumen and luck had parlayed a single investment in a property into an enormous real estate empire. He was a man with a wife whom he adored and a young daughter, Maeve. He wanted to give his wife an amazing gift and the Dutch House just fit the bill.

When he took his wife and daughter to see the house and he told the wife he had bought it for her, she was astounded and appalled. She hated it! It was ostentatious, clearly the finest house in the town where it was located, but Elna was a woman who also had grown up in poverty and had flirted with the idea of becoming a nun and following Sister Theresa. She believed in the value of living simply and of serving the poor and needy of the world. She could never be happy in this house.

Nevertheless, the family moved in. A son, Danny, was born. But over the years, Elna would be absent from the home for extended periods, leaving the children in the care of their father and the caretaker "Fluffy," as well as two house servants who treated them as their own children. Finally, when Danny was three and Maeve was ten, she left for good. Her note said she was going to India.

And so we have the two motherless children and the makings of a fairy tale. Shortly, Maeve develops Type 1 diabetes, which will be another burden she and her brother will bear throughout her life. She is devoted to the care and protection of her little brother, even in adulthood. She essentially sacrifices her life to ensure that he has everything he needs.

In time, Cyril marries again to a much younger woman, the odious Andrea. Now we have the evil stepmother on the scene. We learn that Cyril's main attraction for her is in the house that he owns. She desired that house.

Maeve moves out of the Dutch House as soon as she can. Danny is left alone with Andrea and her two daughters and his father. But not for long. His father dies at age fifty-three and Andrea is in control. She kicks him out of the house.

Andrea is left in control of the business and the house. The only thing provided for Maeve and Danny is an educational trust, so Maeve devotes herself to seeing that her brother receives the most expensive education available.

I could go on and on and recite the whole plot for you, but I have to leave something for you to discover!

Patchett's prose is so straightforward and one could almost say old-fashioned. It is a very traditional way of telling a story, without tricks or embellishments, and I very much appreciated that after some of the other books I've read recently. (I'm looking at you, Marlon James!)  I loved just about everything about her book, except I was a little disappointed with the ending. It seemed to just sort of fade out and I guess I was hoping for something a little more dramatic. I should have known better - no tricks, no embellishments, only real life.