October 05, 2019
A roundup of the week's news of birds and the environment: 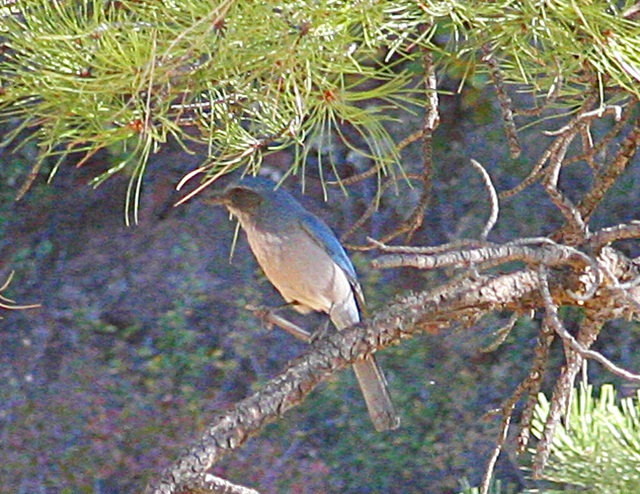 The Scrub Jay is one of the iconic birds of the western United States. I took this (not very good) photograph in Rocky Mountain National Park in Colorado on an autumn trip there a few years ago.

There's some rare good news about the plastic polluting our oceans. The huge floating device that was designed by Dutch scientists to collect plastic debris from what is known as the Great Pacific Garbage Patch succeeded in picking up plastic from the high seas for the first time. That patch of rubbish in the Pacific is now three times the size of France.

But there's more evidence that any help in cleaning up plastic pollution may be too little too late. A comprehensive study of microplastics in California has turned up a mind-boggling amount in San Francisco Bay. Much of this pollution flows into the bay through storm drains. The scientists say that the plastics were found basically everywhere they looked.

There's a hopeful sign of cleaner waters on the opposite coast of the country, in the Potomac River, which President Lyndon Johnson proclaimed a "national disgrace" fifty years ago. Proving that strong clean water laws can have an effect, the river has been cleaned up to the point that dolphins now swim there! Not only do they swim there, they are mating and giving birth in the river.

Gunnison Island in the Great Salt Lake has long been a haven for nesting White Pelicans where their nests and chicks were protected from predators. But now the island is no longer an island. Falling water levels in the lake have created land bridges to the island, bridges that coyotes can walk across. Even if they do not hunt the pelicans, their presence disrupts the peace of the colony and affects the success of nests.

Did you know there are more than 61,000 species of flies in North America? So the "Prairie Ecologist" assures us and they fill a great variety of niches including that of pollinators, predators, scavengers, decomposers, parasites, and much more.

The permafrost in Siberia is no longer "perma". It is melting as the planet heats up and that is exposing the stench of decomposing plants and animals that had been frozen there for millennia. Scientists say that Siberia is heating up faster than almost any place on Earth.

Margaret Renkl has some practical advice for us of things we can do individually and as a society to help birds. 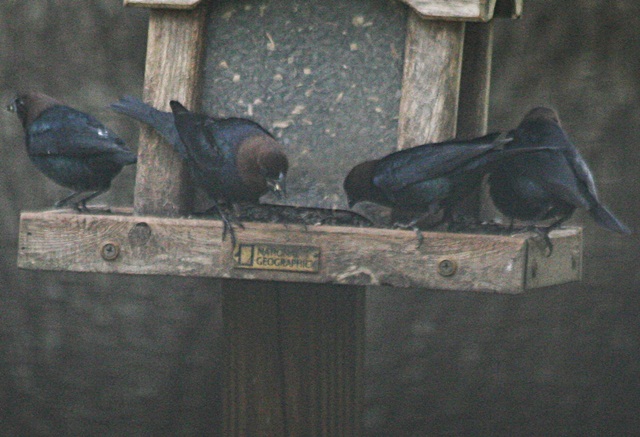 Brown-headed Cowbirds crowd a feeder in my yard in late winter.

One bird that many people who feed birds wouldn't mind seeing a little less of is the Brown-headed Cowbird. Flocks of these birds can quickly clean out a feeder in winter. A recent study of the birds revealed some interesting information about their breeding habits though. It seems that more than 75% of the pairs studied were monogamous through the breeding season, even though the birds are brood parasites that do not raise their own chicks. This is contrary to what theories would suggest.

Loss of habitat has pushed the Oregon Silverspot butterfly to the brink of extinction, but now an effort is underway in the state of Washington to aid it and possibly pull it back. A native coastal prairie habitat is being restored there in order to attract and protect the little butterfly.

In other butterfly news, the various milkweed butterflies like the Monarch and the Queen have evolved to feed on a plant that is poisonous. The milkweed has toxins that the caterpillars ingest and thus gain some protection from hungry birds in the process. But how did this evolution happen, scientists wanted to know? Their report is in the latest Nature magazine.

Leafcutter ants, it seems, know a lot about germ-killers and maybe we could learn something from them that would help to prevent antibiotic resistance.

Bird communities in the Mojave Desert are collapsing. Of the 135 species that were present 100 years ago, 29% are less common or less widespread today. The cause, scientists say, is heat stress caused by climate change.

Nature is wonderful in its infinite variety! There are parasitic wasps the size of a pinhead that prey on other parasitic wasps. They are called crypt-keeper wasps.

Six national forests in New Mexico and Arizona have been ordered by a federal court to stop firewood collection permit sales, timber sales, as well as thinning and prescribed burns in order to protect the endangered Mexican Spotted Owl.

The last undammed river in the Southwest U.S., the San Pedro in southwestern Arizona, is being slowly killed by the pumping of too much water from the ground.