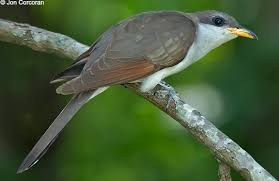 I heard my first Yellow-billed Cuckoo call of the year this week. It's always a welcome sound that I remember well from my childhood. Where I grew up in Northeast Mississippi, these birds were called "Rain Crows." There was a myth that their calls predicted rain. Of course, the birds called every day or whenever they felt like it and they had nothing to do with rain. The bird that I heard would have been a little late with his prediction. We've had very heavy rains over the last couple of weeks but this week is dry so far.

A Texas investor and retired naval officer made a dive in a submarine into the Mariana Trench, nearly 36,000 feet deep, and discovered...litter! The litter appeared to be pieces of plastic. This was the deepest dive ever into that deepest place on Earth. He went 52 feet deeper than the previous deepest descent that took place in 1960.

A recent study by Cornell Lab of Ornithology confirmed that Chicago is the deadliest big city in the country for birds. The city is square in the middle of the central flyway which millions of birds travel in migration and it is full of the glass skyscrapers that confuse the birds and cause them to fly straight into the buildings, killing themselves.

Climate change is having an effect on the grizzly bears of Yellowstone. The changing climate has caused the devastation of some of the bears' preferred food sources and now they are having to travel farther afield to find sufficient food. This brings them in more contact with humans and their death rate is rising because of it.

Methane is a major heat-trapping gas that contributes significantly to the greenhouse gases that are turning Earth into a hothouse. Scientists are concerned that the rate of methane in the atmosphere has been rising dramatically in recent years and they are studying possible causes of the effect.

The Hawaiian Crow, or Alala, is critically endangered. The birds have not nested in the wild for decades, but a captive breeding program has produced chicks which have been raised and returned to the wild. Now, two of those captive-raised birds have formed a pair and are nesting! This is a tangible sign that the Alala Project might be succeeding in its attempt to save the species.

Organic farming which eschews the use of chemical pesticides and herbicides is particularly friendly to birds, especially those, like swallows, that depend upon insects as their primary source of food.

Beginning in 2017, the political appointees by the current administration to the U.S. Fish and Wildlife Service have ordered the delisting or downlisting of 30 vulnerable species from the Endangered Species List every year. They provide no scientific basis for such action.

The inspector general of the EPA recommended on Thursday that the agency recover $124,000 from former director Scott Pruitt for his "excessive" travel expenses. However, the agency is refusing to take the action because the expenses had been "approved."

How warm was it in your town last weekend? Well, over that weekend, the temperature surged to 84 degrees Fahrenheit at the entrance to the Arctic Ocean in northwest Russia. At the same time, the atmosphere's concentration of carbon dioxide exceeded 415 parts per million for the first time in human history. We can't say that Nature hasn't tried repeatedly to warn us of the disaster that looms.

Feral parrots that have escaped from captivity or, in some cases, been deliberately released into the wild, have survived and thrived in many parts of the country. They have reproduced and formed successful colonies in many cities. Among the most successful species in doing this is the Monk Parakeet. 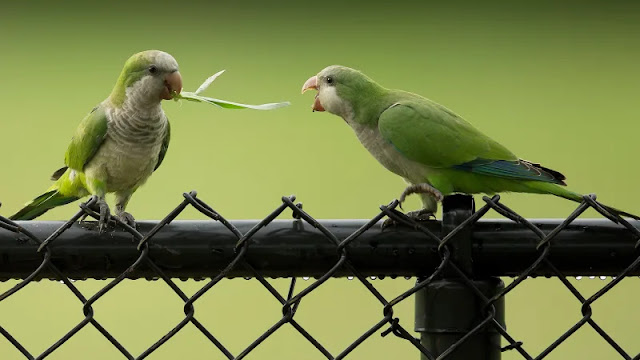 Monk Parakeets can now be found in almost every section of the country.

Climate Watch is a citizen science project of the National Audubon Society to collect information about how North American birds are responding to climate change. Anyone can participate in the project. Visit the Audubon website for information if you are interested.

This is so depressing. On a remote island group in the Indian Ocean, scientists found, and counted, 414 million pieces of plastic. The islands have almost no population and it is clear that most if not all of this plastic washed ashore from the ocean.

In Indonesia, timber certification is supposed to mean that the timber was logged and obtained legally, but, in fact, the system is corrupt and certification is no guarantee of legality. Forests are being razed with little attempt at policing.

The Florida Grasshopper Sparrow is one of the most endangered bird species in the world, but conservationists continue to fight the good fight to save the bird. A captive breeding program is producing birds to return to the wild. On Monday, May 6, the first three captive-bred sparrows were released into their wild, dry prairie habitat. A cause for rejoicing.