January 19, 2019
A roundup of the week's news of birds and the environment: 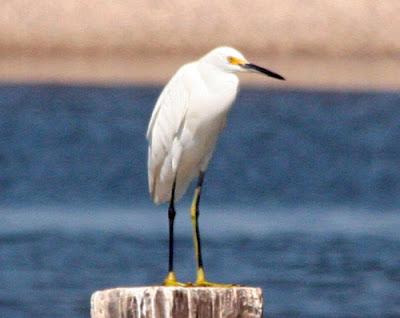 A Snowy Egret poses atop a post near Galveston Bay. Note his "golden slippers," a definitive field mark of the species.

Certain politicians in our country will tell you that there is no such thing as global warming because it is cold here now. Those politicians are unable to see beyond their own backyard. Much of North America is experiencing very cold temperatures this weekend, but in the southern hemisphere, Earth is burning. In Australia, for example, they've had record temperatures recently of almost 122 degrees F which has had devastating effects on Nature. Millions of birds, bats, and fish have died as a direct result of the heat. Moreover, wildfires are widespread and farmers are experiencing crop failure.

Meanwhile, a scientist who studied the Puerto Rican rainforest returned there after 35 years to find that 98% of ground insects had disappeared and along with them the birds that depended on those insects for food.

Oceans had their hottest year on record in 2018 as global warming continues to accelerate with the result that Antarctica is now shedding ice six times faster than it did in 1979. Along the East Coast of North America, these changes have made flooding more routine.

University of British Columbia researchers have discovered that the population of Northern Goshawks that exists on the little archipelago of Haida Gwaii possess a unique genome cluster which makes them distinct from others of their kind. Only about 50 of the birds exist so their survival is in doubt.

The wall which the administration wants to build along our southern border would destroy the National Butterfly Center which is home not only to an amazing array of butterflies but also to at least 200 native bee species.

Although red wolves were declared extinct in the wild in 1980, a new study of a pack of wild dogs in Galveston County on the Texas coast has found that the animals possess red wolf DNA. They are obviously not purebred wolves but are thought to be hybrids of coyotes and wolves, with possibly some dog thrown in for good measure.

Meanwhile, in other canid news, the golden jackal, once barely known in Europe, is now spreading rapidly there and outnumbers wolves at this point.

Species of birds that live in mountainous areas are moving ever higher as the climate warms. A recent study showed that birds in the Andes were heading uphill in an attempt to keep pace with warming temperatures and would soon run out of room. It’s the latest example of how species are on the move as they struggle to adapt to climate change.

A bird whose native habitat ranges from the coniferous forests of northern Asia west through Russia to Finland has been quickening birders' pulses in South Los Angeles recently. A vagrant Red-flanked Bluetail, the first ever seen in California, has chosen to reside there - at least temporarily - just south of the 10 Freeway. 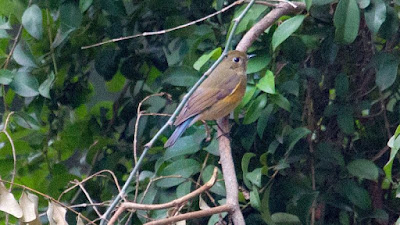 And in other vagrancy news ('tis the season for it), a European Robin has turned up in Peking. the robin is common and taken for granted throughout much of Europe, but it is a rarity in Peking and birders have poured in from far and wide to have a look at it. The bird has been dubbed a "Brexit refugee"! 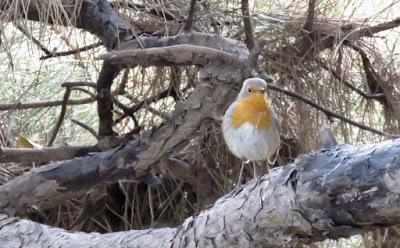 Since the EPA no longer protects the environment, it's up to the people who live there to do it. That is happening in Louisiana where a group of activists led by native matriarchs is fighting a battle to stop a pipeline which they fear would lead to pollution of the precious water of the area.

The Billion Oyster Project is an effort to rebuild oyster reefs in the waters around New York City. It has been ongoing since 2014. Oysters are natural filters and so will help to clean the waters.

Spring is coming sooner not only to the Virginia coast, but to the entire North American Coastal Plain, a region that stretches along the sea’s edge from Texas to Massachusetts and birds are nesting earlier. In one corner of that plain, around Virginia Beach, the Yellow-crowned Night Herons are nesting some three weeks earlier than they have traditionally.

Lichens are complex composite organisms, made up of fungi living together with microscopic algae. Now a study reveals they may be even MORE complex than previously thought.

The new chairman of the Natural Resources Committee in the House of Representatives, Raul Grijalva (D-Arizona), promises stricter oversight of the Department of the Interior in all of its operations. That will be a refreshing change from the lack of oversight for the past two years.
weekly roundup