The Gate Keeper by Charles Todd: A review 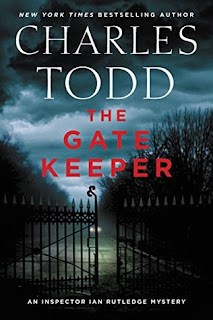 It is soon-to-be Christmas 1920, two years after the end of the Great War. Ian Rutledge has spent the day fulfilling social obligations. It was his beloved sister Frances' wedding day and his duty, since both their parents are dead, was to walk her down the aisle and give her hand to the husband-to-be. He is happy for his sister but cannot help feeling melancholy about how her marriage will change his relationship with her. She has been the rock on which he has anchored his life after coming home from the war shell-shocked, wounded in spirit.

After the wedding, he makes it through the reception, socializing with the guests, but once the happy couple leaves on their wedding trip, his PTSD closes in and he must escape. He leaves London, driving aimlessly with no destination in mind.

Somewhere on the dark and lonely road between London and Suffolk, he encounters a car stopped in the middle of the road with an open door. Rutledge stops to give assistance and finds a woman standing beside the car and at her feet lies the body of a man. He had been shot once and was dead.

The woman swears that she did not kill the victim. He was driving her home from a party when they saw a figure in the middle of the road and the driver stopped to see if help was needed. As he approached the figure, he was shot through the heart and the figure retreated into the darkness.

Rutledge makes a cursory search for the killer or for the gun but finds no trace of either. He sends the woman in his car to the nearby village of Wolfpit to get the constable, while he stays with the body and the car.

Inspector Rutledge, having stumbled upon the murder scene, is determined to investigate the case and he manages to persuade Scotland Yard to let him be in charge, even though the local constabulary are less than enthused about his participation.

His investigation reveals that the victim, Stephen Wentworth, was hated by his family but loved and respected by everyone else. What could be the source of such hatred?

Well, it seems that Stephen was a twin. He was the second-born twin. The first-born was a beautiful baby and his mother fell in love with him at first sight and lavished all her love on him. When Stephen was born a bit later, he was at first not a pretty baby and his mother disdained him. Her attitude toward the children was passed on to the father. The only one who gave Stephen any love was his nanny.

Then a few months later, tragedy struck. Stephen's brother was found dead in the crib. Stephen was cuddled up beside him. The mother irrationally called baby Stephen a murderer! She was sure that he was jealous of his perfect brother and so killed him to get him out of the way. The doctor said it was likely a heart defect, but no autopsy was allowed on the perfect child, and Stephen was forever branded in his family's eyes as a murderer.

Were people really that ignorant in 1920? Well, maybe. After all, there are still some pretty weird ideas given credence in 2018; e.g., the vaccinations cause autism crowd.

Oh, well, soon the investigation's waters are muddied by a second killing. Same m.o. as the first - one shot to the chest. There's no immediate obvious connection between the two men, but Rutledge instinctively knows there must be one.

Then, in a nearby village, a third man with no apparent connection to the other two is killed in the same way and the waters get muddier still.

It's a complicated case and Rutledge struggles to find the thread that will lead him out of the maze and into the light, while at the same time continuing to struggle with his old demons from the war. I'm sure other long-time readers of this series, like myself, are longing for Rutledge to finally conquer those demons and get on with his life, but looking back over the last several books, one can see that some progress has been made, even as England itself begins to make some progress in coming to terms with the loss of so many of a generation of its young men and is moving on. These books do a good job, in my opinion, of conveying that atmosphere.