August 25, 2018
A roundup of the week's news of birds and the environment: 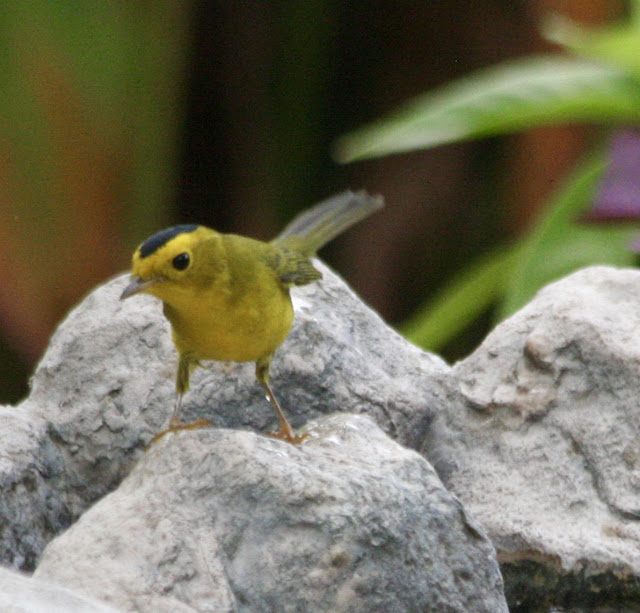 The warblers, like this little Wilson's Warbler, are passing through on their fall migration. Even though our temperatures here are still in the high 90s every day and summer shows no signs of releasing its grip, the birds are feeling the urge to head south. They know fall and winter are coming.

As Interior Secretary Zinke prepares to open Grand Staircase-Escalante to mining, experts and business owners say tourism income far outweighs the potential from fossil-fuel extraction. In fact, income from tourists visiting national monuments and other public lands is a vital part of the economy in the communities where they are located. Spoiling those lands by opening them up to oil exploration is potentially taking money out of the pockets of the local inhabitants.

The Houston Astros played the Seattle Mariners last Monday through Wednesday. As I tuned into the game on Monday night, I was amazed to see the haze on the field. At first I thought it was fog, but then I learned it was smoke from wildfires in California and British Columbia and I was appalled. If that is what late summer is like in the Northwest in 2018, what will it be like 10, 20, 30 years from now as conditions worsen?

And it's not just our lungs that are endangered by the smoke. Increasingly, science is suggesting that psychiatric problems can be worsened by air pollution and high temperatures. Such conditions may increase the risk of mental illness and suicide.


The oldest and thickest sea ice in the Arctic has started to break up, opening waters north of Greenland that are normally frozen, even in summer. This phenomenon – which has never been recorded before – has occurred twice this year due to warm winds and a climate-change driven heatwave in the northern hemisphere.
*~*~*~*
Ultimately, an economy built on the extraction of fossil fuels is an "extinction economy" which, like this summer's wildfires, consumes everything in its path and leaves devastation behind. Only look at the mountains in Appalachia that have had their tops removed to get to coal.
*~*~*~*
A recent report in the journal Science revealed research that shows that the key to ants' efficiency may be idleness. In a study of fire ants, the researchers learned that 70 percent of the work of building a tunnel was done by 30 percent of the ants. The rest were slackers.
*~*~*~* 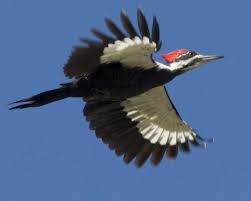 Photo of Pileated Woodpecker courtesy of Audubon.Org.
The largest woodpecker still surviving in North America is the Pileated. (We must assume that the larger Ivory-billed is extinct although some still hold out hope that a few survive in some remote southern swamp.) What are its chances of surviving when its larger cousins, the Imperial and the Ivory-billed have fallen by the wayside? Pretty good, as it turns out. The Pileated, for one thing, is a more adaptable bird and studies have shown that it is well able to survive as long as tree cover remains as much as 20 percent. My own observations would tend to confirm that. The big birds thrive in my mostly suburban neighborhood which does still retain quite a lot of tree cover.
*~*~*~*
The Rio Grande River is considered one of the most endangered rivers in North America. It provides drinking and irrigation water to 6 million people and 2 million acres of farmland on both sides of the river. The United States and Mexico need to come to an agreement on how to utilize and protect the river. That is made very difficult in today's political climate.
*~*~*~*
The lemurs of Madagascar are in crisis. Conservationists warn that at least 95 percent - 105 species - of the island's beloved primates are at risk of extinction.
*~*~*~*
It was a scene of carnage; in August 2016 more than 300 reindeer had huddled for warmth on a mountaintop in Norway where they were struck by lightning, killing them all in one stroke. But out of their deaths came some valuable research. Scientists studied how the decomposing bodies, visited by hundreds of scavengers, could contribute to greater plant diversity in the area. Their results were published this week in Biology Letters.
*~*~*~*
It seems we are getting better at saving seabirds after oil spills. New techniques for cleaning the birds are giving better survival rates.
*~*~*~*
Twenty prominent scientists from a range of institutions are calling on California governor Jerry Brown to include tropical rainforest conservation in the state's cap and trade regulation. The Global Climate Action Summit will be held next month in San Francisco.
*~*~*~*
It's not been a good year for Maine's Atlantic Puffins. Many of their chicks are taking too long to fledge. Young birds on Seal Island and Matinicus Rock are taking nearly 50 percent longer to fledge due to a shortage of prey, likely stemming from a nearly two-degree increase in sea-surface temperatures around these remove islands.
*~*~*~*
A new climate study claims that summer weather patterns are increasingly likely to stall in Europe, North America and parts of Asia. That explains why Arctic warming is making heatwaves elsewhere more persistent and dangerous. The study shows that rising temperatures in the Arctic have slowed the circulation of the jet stream and other giant planetary winds which means high and low pressure fronts are getting stuck and weather is less able to moderate itself.
*~*~*~*
Farmers who have depended on honeybees to pollinate their crops are looking for alternatives as those bees are under siege and declining. The are finding that native bees are very efficient pollinators and a lot less finicky than the non-native honeybees.
*~*~*~*
In a limestone cave nestled high above the Anuy River in Siberia, scientists have discovered a human hybrid, the 90,000-year-old bone fragment of a female at least 13 years old whose mother was Neanderthal and whose father belonged to another branch of ancient humanity known as the Denisovans, according to an analysis of DNA discovered inside the fragment. This is further confirmation of the widespread interaction and interbreeding of Neanderthals with other groups of early humans which was once thought most improbable.