August 03, 2018
A roundup of the week's news of birds and the environment: 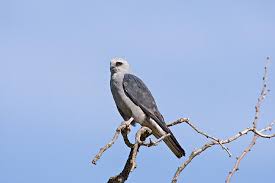 A pair of Mississippi Kites has taken up residence in my neighborhood. I see them circling over my yard or hear them calling almost every time I am outdoors these days. They feed mostly on medium- to large-sized insects but their diet may also include small reptiles or amphibians and even small birds and bats.

The American Meteorological Society issued its State of the Climate report which confirmed that 2017 was the warmest year ever recorded that did not include an El Niño event.

And in the current year, the extreme weather of July made it clear that climate change's impacts are no longer subtle. In spite of that, media outlets in general continue to be negligent in reporting the connections between these extreme events and global warming.

The present administration in Washington is officially proposing rolling back clean car standards. The change would weaken the Obama-era clean car emissions and fuel efficiency standards and would limit California's and other states' authority to set tougher standards.

Meanwhile, a find by archaeologists studying the Mayan civilization is throwing more light on historical climate change. The sediment under a lake in Mexico gives evidence of a more than century-long drought which was probably instrumental in bringing down one of the most advanced civilizations of its time.

The current ferocious wildfires in California may not be an aberration but prophetic of the state's future. In spite of that, some in the areas being burned will still insist that climate change is not impacting the intensity of the fires and that, actually, climate change does not exist.

Killer whales in the Salish Sea of the Pacific Northwest face killer toxins in their environment. The poignancy of their situation was brought home recently by the story of the orca mother who refused to give up her dead calf. She carried the dead baby with her for more than a week.

Helen Macdonald, author of the wonderful book H is for Hawk, writes about the pleasures of watching Nightjars flying at dusk.

And our favorite insect blogger, "Bug Eric," bemoans the paucity of insects around Colorado Springs this summer but he does find happiness in watching wasps go about their business.

They may look like green algae but actually they are plant-worms and they rotate in circular congregations along Atlantic beaches in the summer.

But in Florida, a real algae, a toxic red tide, is killing sea creatures as well as making humans sick.

Some birds are specialists and require a particular environment to survive, but birds, in general, are very adaptable creatures and, given enough time to make the adjustment, they are able to accommodate to new situations. A recent study of California birds gives evidence of this, showing that they are adjusting, sometimes in remarkable ways, to a changing climate.

Raptors such as Golden Eagles continue to suffer persecution from landowners in Scotland and the continued existence of many of them is in doubt.

The largest King Penguin colony in the world, whose home is on a island in the southern Indian Ocean between South Africa and Antarctica, has lost 90% of its population according to a new study. Satellite images indicate perhaps 60,000 pairs left, down from 500,000 breeding pairs thirty years ago.

The Texas Parks and Wildlife Department has warned that the Bentsen-Rio Grande Valley State Park, one of the jewels of public lands on the southern Texas border, could be forced to close if the current administration gets its way and builds a wall through the middle of it.

A new publication gives information about the habitats of the more than 400 species of bees found in Massachusetts, Maine, New Hampshire, and Vermont.

New legislation introduced in the Senate last week by Hawaiian Sen. Mazie Hirono and three Democratic colleagues calls for the use of native plants in projects such as roadside landscaping or landfill restorations on federal lands wherever possible. It also promotes the hiring of more botanists for U.S. Department of Interior projects ranging from environmental restoration to pollution abatement.
weekly roundup