April 05, 2018
I find the desolate, arid terrain of West Texas to be uniquely beautiful, peaceful, soulful even. Perhaps it is because it is such a contrast to the humid, jungly feel of Southeast Texas where I live. Visiting it is a bit like being in another country, maybe even another planet. 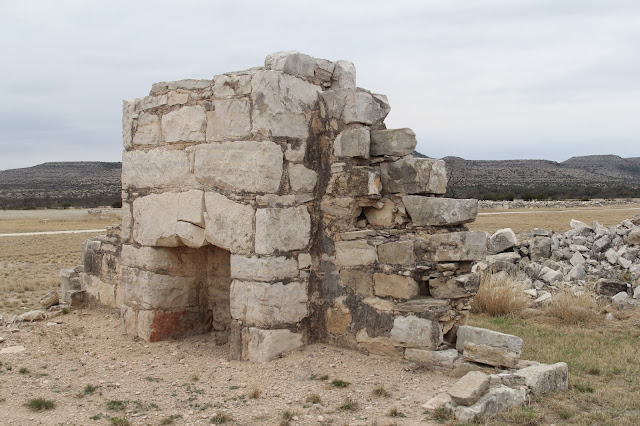 In the 1800s, there was a series of forts erected along the western Texas frontier. One of them was Fort Lancaster in the Pecos River Valley. Today, nothing remains but the ruins of several of the buildings and the area is a State Historical Site with a visitors' center. 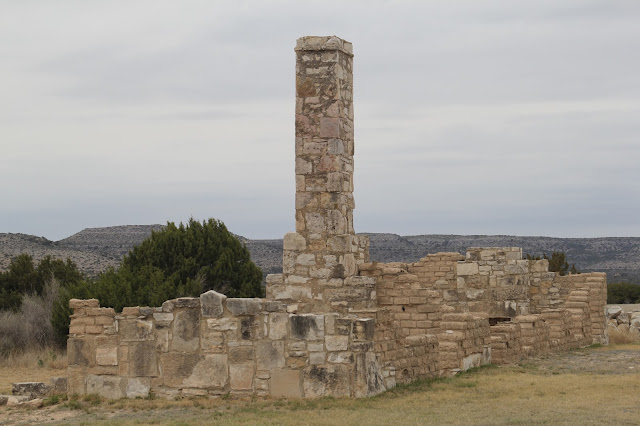 This is one of the most complete of the surviving structures. Interestingly, we had visited this historical site a few years ago in late October during the time of the fall migration of Monarch butterflies. On the day that we were there, the place was literally covered in millions of the colorful butterflies on their way to the mountains of Mexico for the winter. One could hardly take a step for fear of crushing some of them. 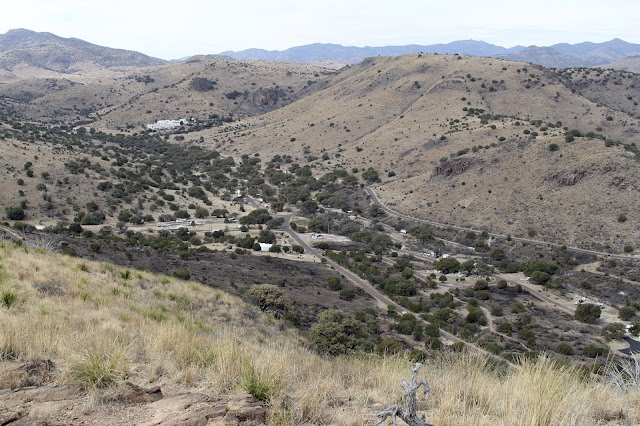 Another fort in the system was Fort Davis which is now the site of a wonderful state park. The fort itself is now a national historic site, part of the National Park System. In the late 1800s, it was home to buffalo soldiers. The site is well preserved and is one of the best surviving examples of western military posts. We did not visit it on this trip, but if you are ever in that area, it is worth taking the time to see. This view is of part of the Fort Davis State Park. 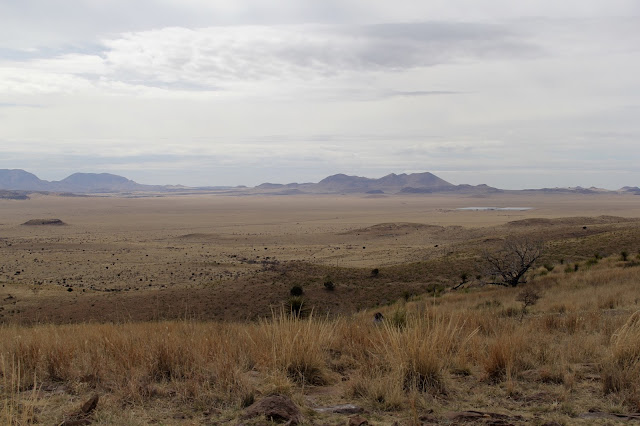 Another view from the park. Spring had not arrived yet in that area and most of the landscape was still brown. 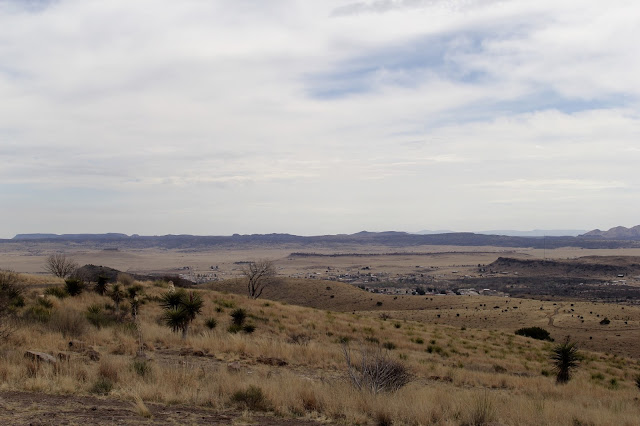 Looking down from one of the mountains, one can see part of the town of Fort Davis. 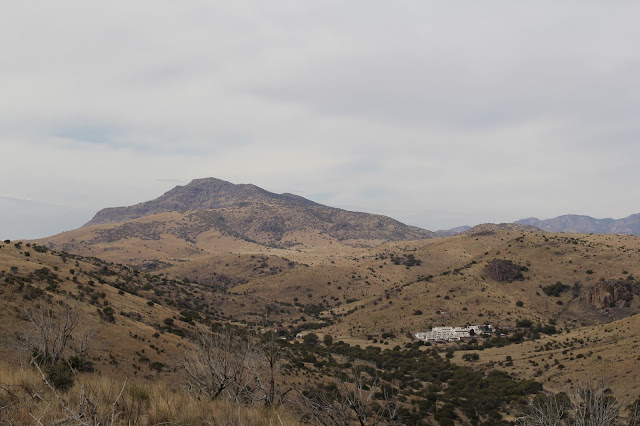 That white building in the distance is interesting. It is called the Indian Lodge and was built in the 1930s as a WPA project. We stayed there on a previous visit and found it to be quite a wonderful place. It was undergoing renovations at the time of our latest visit and is supposed to be open for business again in May. 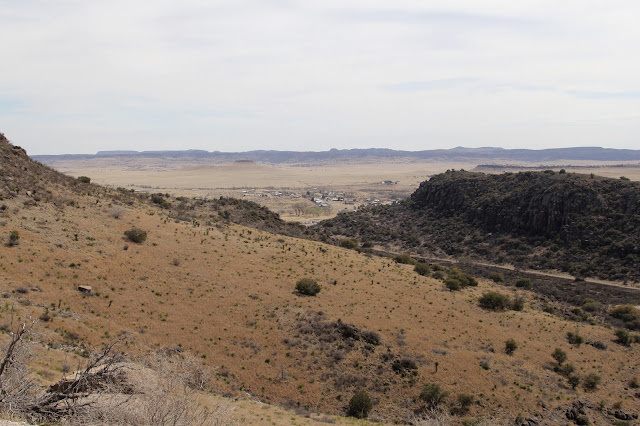 Here's another view from the mountain top into the wide open spaces of Fort Davis and surrounding area. Literally miles and miles of Texas. 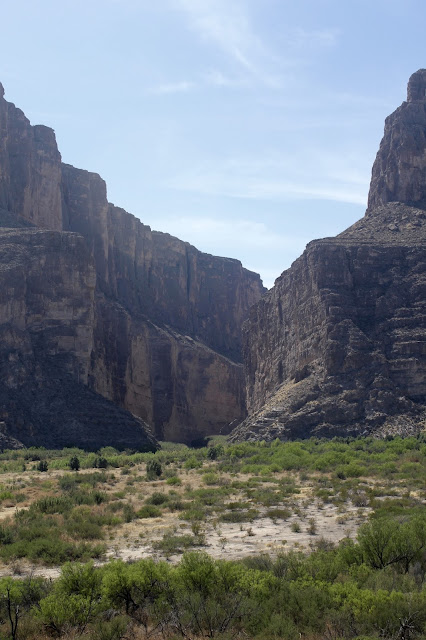 Moving a bit to the south, one finds the expanses of Big Bend National Park.
Most of it was brown as well but as we got closer to the river, the vistas began to get greener. This is a view of the entry to the Santa Elena Canyon which the Rio Grande River flows through. 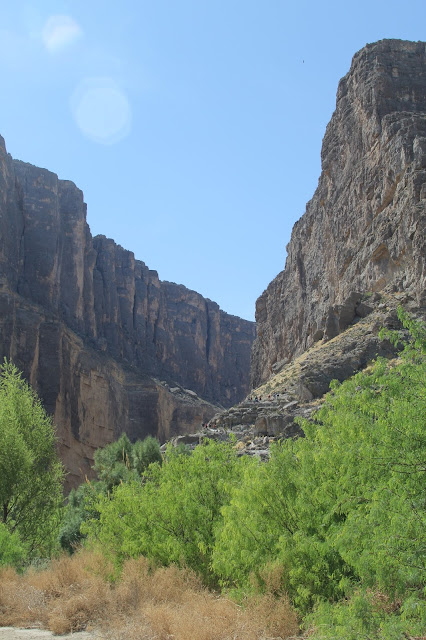 Another closer view of the canyon entrance and the greenery around it. 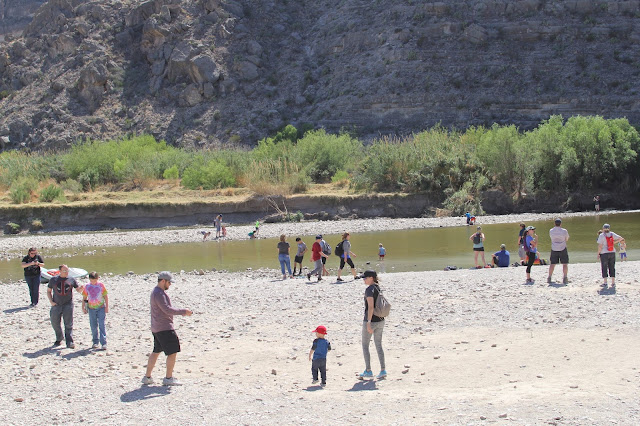 The area near Santa Elena was a very popular spot with spring breakers on the day that we were there. When we've visited here in the past - in the fall when kids are in school - we've had this site virtually to ourselves. Just on the other side of the river is Mexico. We could have waded across on this day. 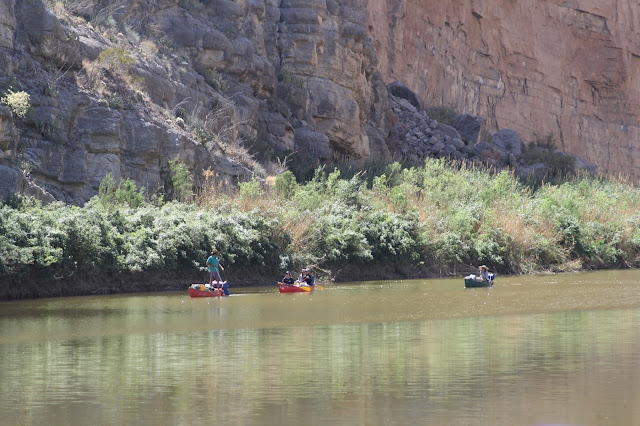 Some adventurers were canoeing down the river. 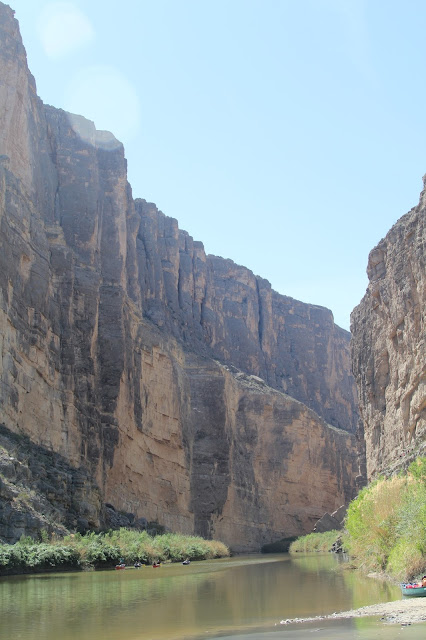 Still another view of Santa Elena, an iconic spot in Big Bend, with some of the canoeists in the background. 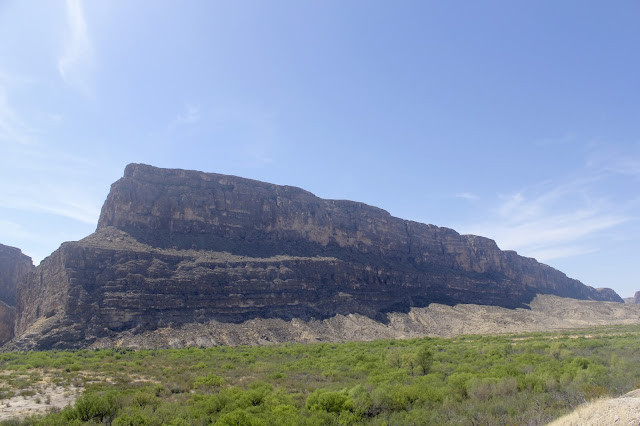 Big Bend is full of big rocks and big mountains. 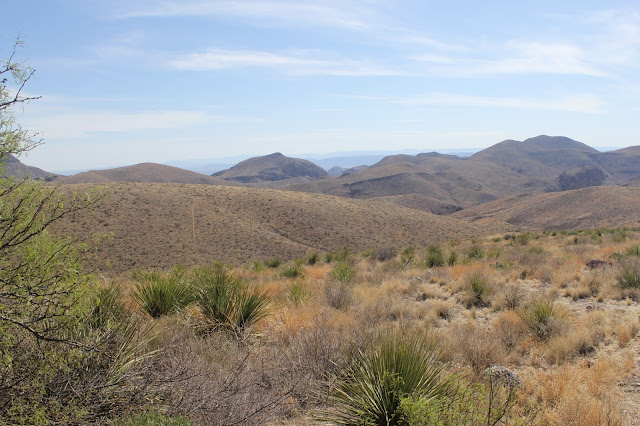 A view from one of the stops along the way, the Sotol Vista. 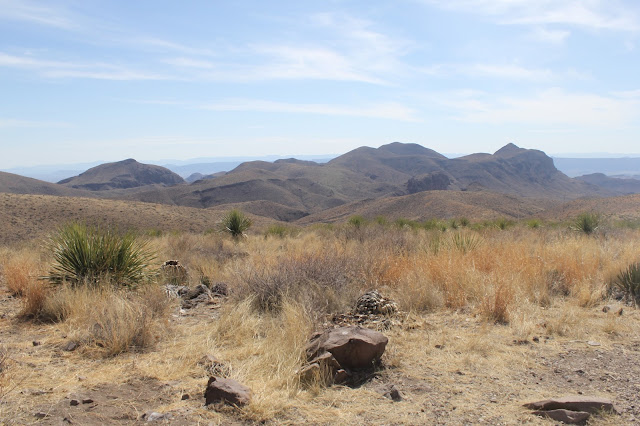 Another angle from the Sotol Vista. 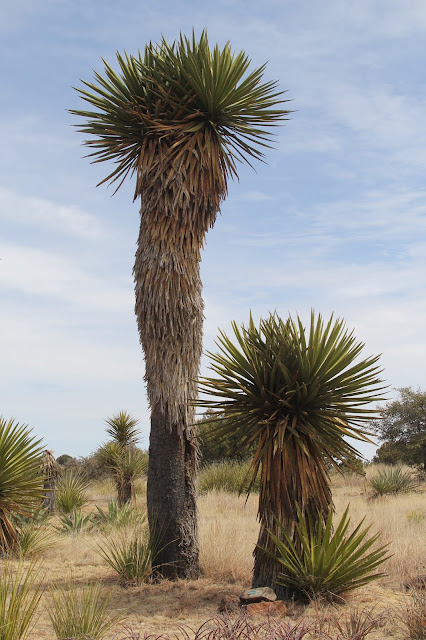 The Chihuahuan Desert Research Institute and Nature Center was one of my favorite stops on our trip. It had wonderful birds, many of which I showed you in my previous post, but it also had wonderful plants like these beaked yuccas. 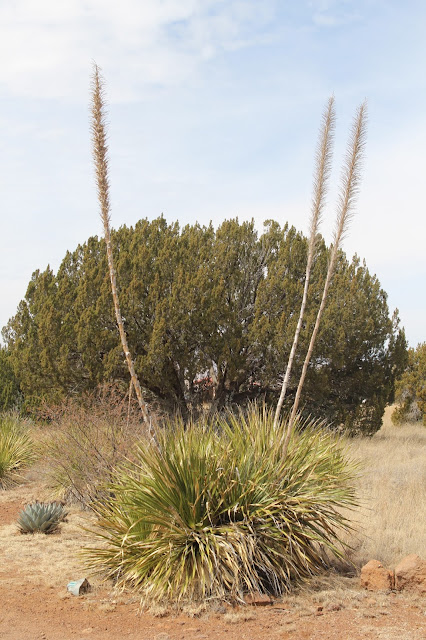 And sotol, of course. It is one of the iconic plants of the Chihuahuan Desert. 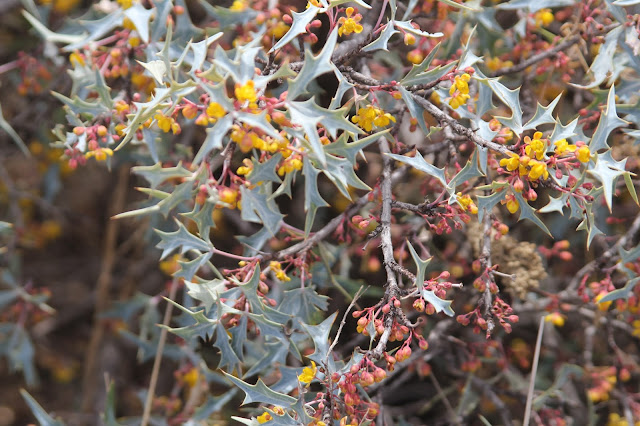 This is a fascinating plant called agarito (Mahonia trifoliolata). This one was in bloom and it had plenty of bee visitors taking advantage of the blossoms. 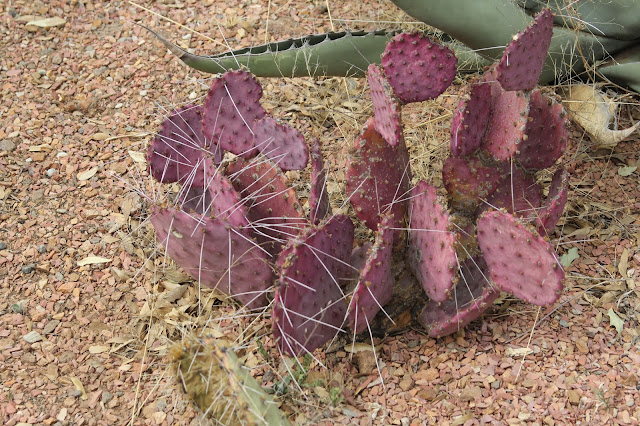 This is the purple prickly pear (Opuntia Violacea). 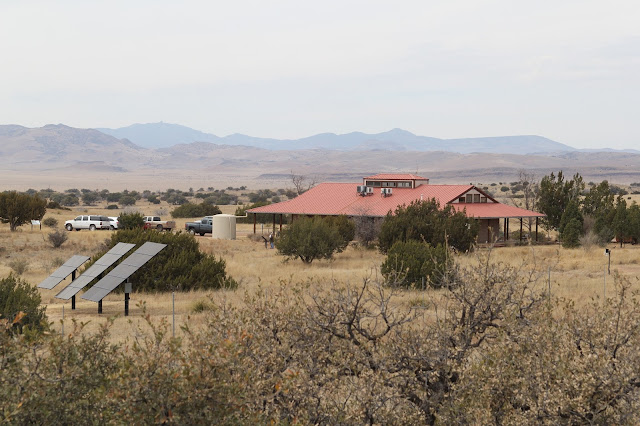 A view of the CDRI visitors' center with Davis Mountains in the distance. 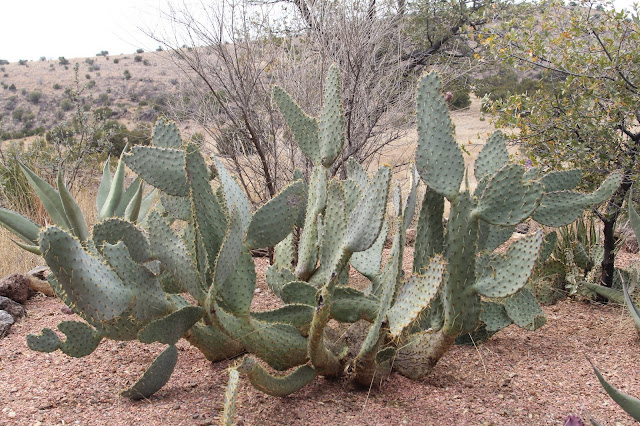 Another impressive cactus, just beginning to develop buds. It will soon be in bloom. 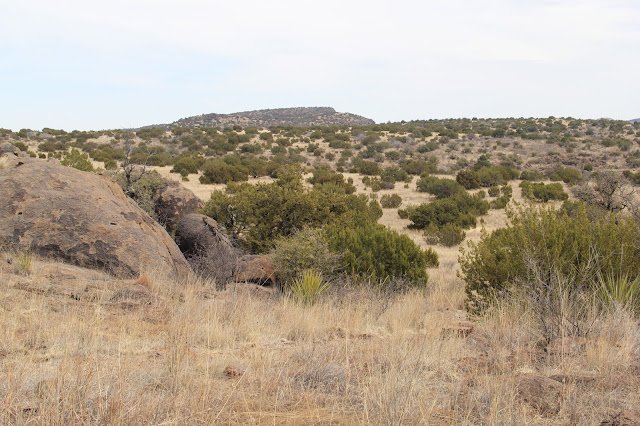 This is still part of the Chihuahuan Desert. 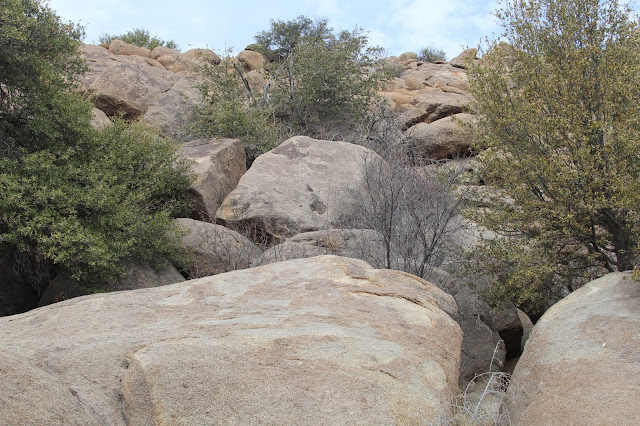 I could seriously use one of these big rocks in my garden! 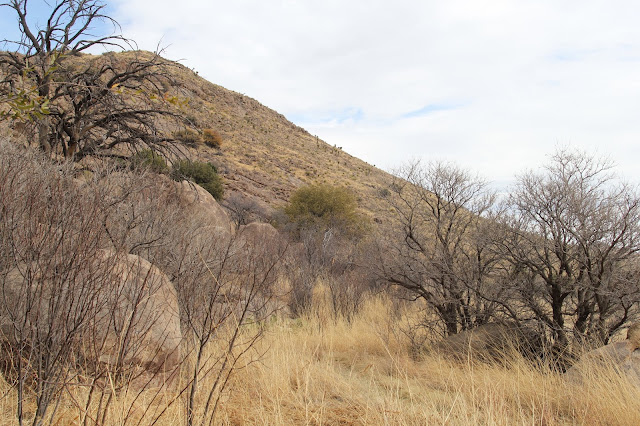 By now, I suspect this vista is beginning to look a little greener than it did during our visit. 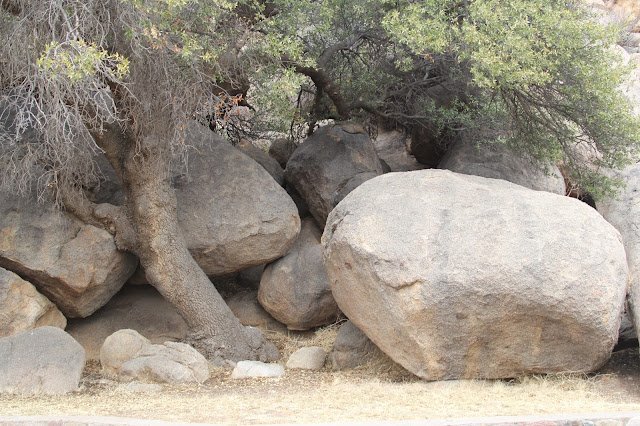 Hmm...I wonder if I could fit one of these into the trunk of my car. 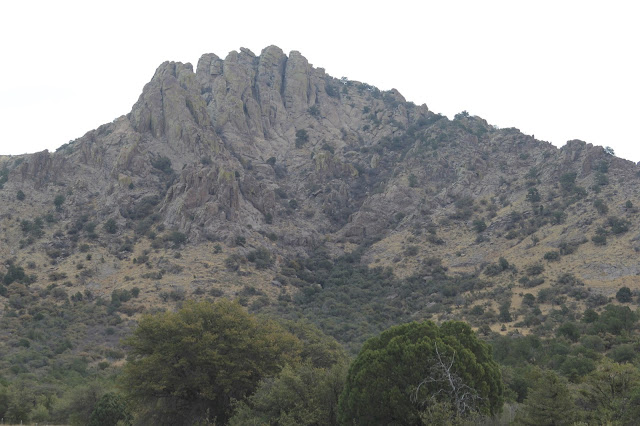 Still a part of the Davis Mountains system.

We had a relaxing, peaceful trip which renewed my soul, although, frankly, it would have been a lot more relaxing and peaceful with fewer people. Our next trip to that area will definitely not be during spring break!
Big Bend National Park Chihuahuan Desert Research Institute Davis Mountains West Texas