September 23, 2017
A roundup of the week's news of birds and the environment: 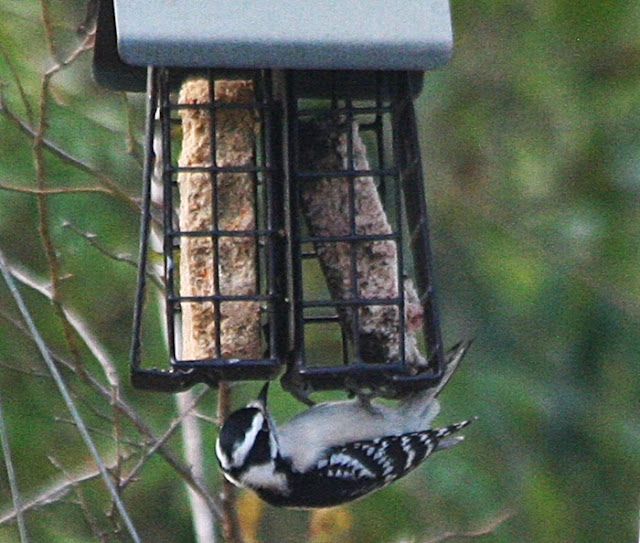 A female Downy Woodpecker enjoys a meal of suet from the bottom of the cage.

One of the notable and scary things about this season's hurricanes has been the way that they have quickly intensified. Often that intensification has come just before landfall, with disastrous results for the communities that have been in the way of that landfall. The reasons for the rapid intensification, or explosion as some call it, are not entirely understood, but climatologists believe that the unusually warm ocean waters have played their part in feeding the storms.

Puerto Rico, hit by Hurricane Irma and then completely devastated by Hurricane Maria, was already suffering environmental calamities. The storms worsen those and create additional public health problems, especially in poorer areas of the island.

The Puerto Rican Parrot is an endangered species that has been under protection for five decades. As Maria bore down on the island, the keepers of 230 captive parrots at the aviary in El Yunque National Forest were charged with making sure that the birds survived the storm. They did. They rode out the storm in a hurricane safe room, as they have many times before.

The endangered Snail Kites of Florida did not fare so well. All 44 nests of the birds around Lake Okeechobee were destroyed in the storm.

A recent DNA sequencing study of American oak trees has shown that they had a common ancestor in the northern part of the continent about 45 million years ago. That single species has given rise to 220 different species and two distinct lineages - the red oak and the white oak.

The Winter Finch Forecast is out and the prediction is that there will not be much movement southward by finches this year because there has been an excellent cone crop in the boreal forests where they spend their summers. Since there is plenty of food, there is no reason for them to leave home. The Northeast and the states nearer the Canadian border will see some movement, but here along the southern coast and throughout much of the country finch sightings will likely be few.

For 51 years, the Patuxent Wildlife Research Center in Maryland has been central to the efforts to save and increase the population of the critically endangered Whooping Crane. Now, that project is ending because funding for it has dried up. The research center will continue with other important projects, but its flagship program, the one it was known for, will be no more.

The report that Interior Secretary Ryan Zinke completed on the status of national monuments has been leaked, and it is just as bad as we suspected. It would modify at least ten of the sites, shrinking the boundaries of four of them. And all of the public lands would be subject to what the administration calls "traditional uses," by which they mean grazing, coal mining, logging, and commercial fishing. 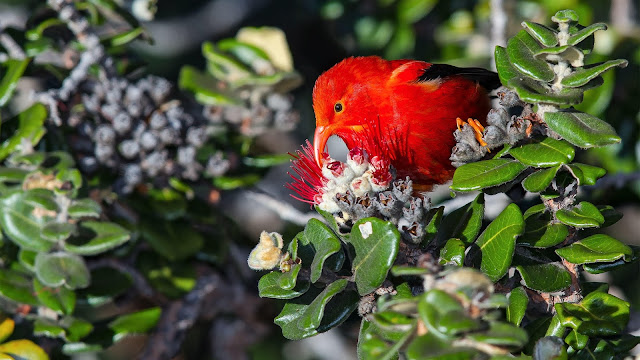 This is the 'I'iwi, or Scarlet Honeycreeper, a native Hawaiian honeycreeper which, like many Hawaiian birds, is threatened by loss of or degradation of habitat and by the effects of climate change. This bird was once one of the most common in Hawaiian forests. Now the 'I'iwi will be given protection as a threatened species under the Endangered Species Act. It is hoped that this will be the first step to its recovery.

The future of the oldest tree species on Earth is in peril because of climate change. The bristlecone pine needs to move its range northward and into the mountains in order to survive, but the trees, which can live for 5,000 years, must compete with other trees in that habitat and cannot seem to move fast enough to escape the danger.

The ABA Blog continues the fight to save the Santa Ana Wildlife Refuge on the Texas/Mexico border from the ill-conceived idea of a wall built through the middle of it. They urge everyone who loves wildlife and wild places to speak out against the project. With all of the catastrophic news of earthquakes, hurricanes, and wildfires over the last several weeks, this story has sort of gotten lost in the shuffle, but it's still out there and it still needs to be stopped!

At the West Coast Wildlife Center in New Zealand, a 23-year project to save the Kiwi, the country's most iconic animal, is underway. Operation Nest Egg takes Kiwi eggs from the wild, incubates them, and raises the chicks until they are big enough to fend for themselves before releasing them back into the wild. This has had the effect of increasing and stabilizing a population that has been at risk.

Bird migration has long mystified the humans who observed it, but, thanks to modern technology, we are getting more and more data to begin to understand it. One of the surprising facts learned is that many small songbirds eschew overland routes and instead strike out over open oceans to reach their destinations.

The California Condor is a success story. In 1987, the last remaining 22 birds in the wild were all captured and taken to San Diego and Los Angeles zoos to be bred in captivity. Thirty years later there are roughly 450 of the huge birds with the 10-foot wingspan. This includes about 270 in the wild in California, Arizona, Utah, and northeastern Mexico. The birds still face danger, especially from mercury and lead poisoning, but the slow and steady climb in the population is a very hopeful sign.