September 02, 2017
A roundup of the week's news of birds and the environment: 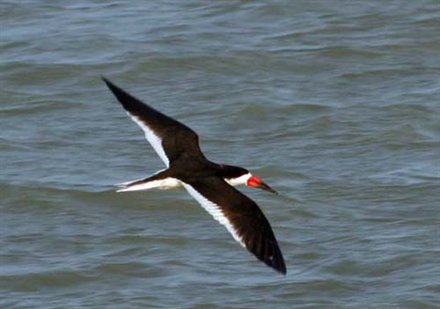 Though the rains of Hurricane Harvey moved on this week, our region will long be dealing with the multi-pronged environmental disaster created by the storm. Air pollution, chemical and gas spills, as well as the dirty floodwater pose a continuing threat to public health as well as to the survival of wildlife, including some endangered species, such as the Attwater's Prairie-Chicken.

Although scientists always caution that specific weather events cannot be directly tied to the effects of climate change, the record floods around the world in 2017 certainly do not seem coincidental. As of this week, more than 1400 people had died in floods in South Asia. In mid-August, flooding in Sierra Leone and resultant mudslides killed hundreds. In all of these cases, the damage to infrastructure and property and the economy is incalculable.

It's time to count your shorebirds. The fourth annual Global Shorebird Counting is underway, running from September 1-7. Results of counts can be reported to eBird. World Shorebirds Day, a day to celebrate shorebirds and those who protect them, is September 6 every year.

Hurricanes are a mixed bag for bays and estuaries such as those of the Aransas Wildlife Refuge on the Southeast Texas coast to which the endangered Whooping Cranes will be returning in a few weeks to spend their winter. Although the storms can cause widespread destruction, as Harvey certainly did, they also bring an infusion of fresh water which can be beneficial and life-giving.

Unfortunately, in the case of Harvey, the extensive damage caused when it came ashore at Rockport as a category 4 hurricane included the destruction of the International Crane Foundation's office there. They are seeking donations to help rebuild.

Bobolinks are grassland birds. In the past, there was a fairly stable population of the birds in New England, but with continued development there, that population declined. Now they are seldom seen there, but The Bobolink Project is seeking to reverse their decline.

Certain animals, such as the snowshoe hare, change their colors to match the seasons to make it easier for them to hide from their predators. What will happen to these animals when the seasons do not change as they have in the past, when summers get longer and longer and snows don't come as frequently? Will they be able to adapt to climate change? Experiments are being conducted that it is hoped will give some data to answer that question.

This Cooper's Hawk, which sought refuge in a man's taxi during Hurricane Harvey and whose image subsequently went viral on social media, is now safely in the care of wildlife rehabilitators. He was, inevitably, dubbed Harvey.

Because so many of them nest in the Arctic, which is changing rapidly due to warming caused by climate change, shorebirds are already being adversely affected by the heating up of the planet.

The Eastern Bluebird's range once extended into the Bahamas, but it is one of seventeen bird species that were endemic to the islands but which disappeared from them during the last ice age. They no longer live there today.

Conservationists are attempting to create a new colony of Laysan Albatrosses on Oahu as a hedge against their current colony being flooded by rising sea water.

Birds, in general, are not known for their great senses of smell, but a new study of Scopali's Shearwaters indicates that seabirds do use that sense to help them navigate over open water.

Corridors for animals to travel through human habitats make their daily and seasonal commutes through those areas safer, less likely to end in tragedy.

Bicknell's Thrush may hold the unenviable distinction of having the smallest population size of any migratory songbird within the contiguous United States.

Energy companies continue to shut down their old coal-fired plants and convert to more sustainable and cleaner sources of energy production such as wind, solar, or natural gas.