Everything's bigger in Texas - including the hypocrisy

May 29, 2015
I have lived in Texas for forty years, during which time I have given birth to two full-blooded Texans. And still, I have a hard time thinking of myself as a Texan.

My discomfort with being labeled a Texan has everything to do with the political image and leadership of this state where paranoia and a sense of superiority and privilege run deep. It has nothing at all to do with the ordinary people of Texas who are friendly, helpful, and good neighbors to have.

With that in mind, I have been somewhat bemused but not really surprised by the actions of those said politicians this week - the week of the Great Texas Flood of 2015.

Keep in mind these are the same leaders who were last seen assigning the State Guard to keep an eye on a U.S. military training exercise called Jade Helm because it was seen as a potential move by that dastardly Obama to "take over" Texas. (Never mind the fact that there are already thousands of U.S. military personnel in the state at the many military installations located here.)

But as flood waters inundated much of the state this week, sweeping away cars, houses, businesses, and people, some of whom are still unaccounted for, the first reaction of political leaders was to ask that same dastardly Obama to intervene. Send help! Send money!

Many have pointed out, quite reasonably I think, that these same people sing quite a different tune when it is another part of the country that is in trouble and needs help. Sen. Ted Cruz provides an excellent example.

When the Superstorm Sandy hit the East Coast in 2013, the devastation was terrible. The states that were hit hard turned to the federal government for disaster assistance.

When the bills for such aid were considered in Congress, can you guess how the Texas delegation voted? Most in the House did actually vote for the bill but eight members including the execrable Louis Gohmert voted against it. Both of our esteemed senators, Cornyn and Cruz, voted against the bill.

Here was Ted Cruz doing what he does best, demagoguing, during the Sandy Relief Bill debate:

"This bill is symptomatic of a larger problem in Washington – an addiction to spending money we do not have. The United States Senate should not be in the business of exploiting victims of natural disasters to fund pork projects that further expand our debt."

And here is Ted Cruz this week on requesting aid for his drowning state:


“The federal government’s role, once the Governor declares a disaster area and makes a request, I am confident that the Texas congressional delegation, Sen. Cornyn and I, and the members of Congress both Republicans and Democrats will stand united as Texans in support of the federal government fulfilling its statutory obligations, and stepping in to respond to this natural disaster."


Cartoonist Mike Luckovich of The Atlanta Journal-Constitution sums it all up quite nicely. 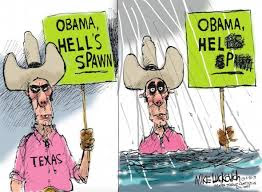