June 14, 2014
The Purple Gallinule is a favorite target bird of mine when I go birding around the wetlands in Southeast Texas in the summer. Here's the post I wrote about chasing it back in the summer of 2010. (Note: Since this post appeared, the ABA has changed the name of the Common Moorhen to Common Gallinule.)

The Purple Gallinule is one of the most colorful members of a rather uncolorful family, the rails. Specifically, they are part of the orderGruiformes, family Rallidae. It is a family with many extended relatives, including some rather famous ones like the Whooping Crane.Purple Gallinules have some much closer and more common relatives in the American Coot and the appropriately-named Common Moorhen. The gallinules share body-type and many lifestyle habits with these two birds. 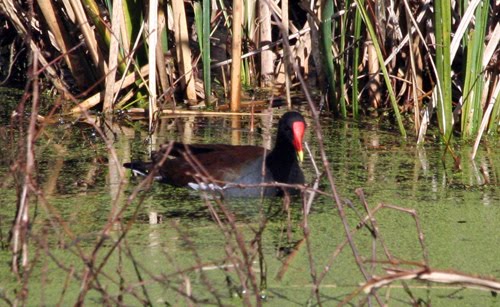 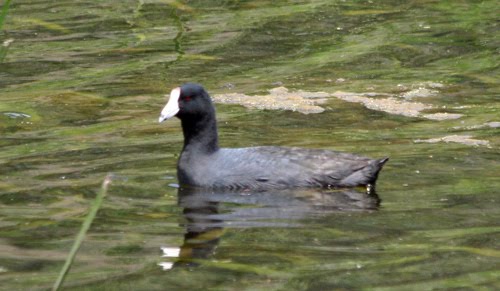 The American Coot, on the other hand, features a white bill with a white frontal shield on the forehead.Both of these birds are more common in our area than the Purple Gallinule. The gallinule is more of a tropical bird, but it can be found in the eastern third of Texas and all along the Gulf Coast in summer. In recent years, a few of the birds have spent their summers at Brazos Bend State Park and they were my main reason for wanting to visit the park yesterday. When I go chasing a particular bird, often I come up empty, but yesterday I was not disappointed. 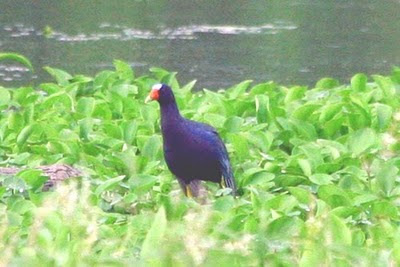 Almost as soon as I stepped from the car, I saw the bird in the vegetation along the edge of Elm Lake. (This picture appears a bit foggy because my camera lens was still fogged by the transition from the car interior to the humid outdoors.)I was able to watch the bird for several minutes and snap several pictures. I looked around for a mate or possibly a chick - I thought from the way the bird spread its wings at times that it might be sheltering a chick - but I didn't see either. Just the solitary bird. 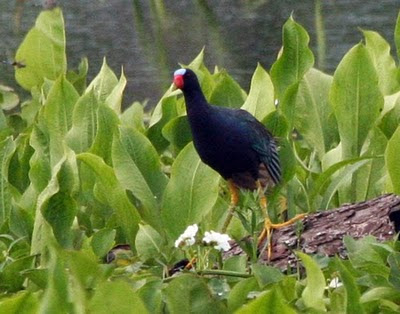 The bird stopped and posed on a partially submerged log. Look at those long, long toes! They help the bird walk on floating vegetation like lily pads. 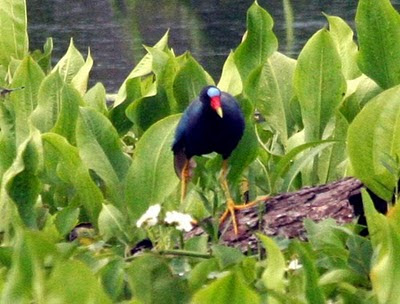 Note that this member of the family has a pale blue forehead shield to go with its bright red beak with a white tip. Its body colors range from the purple of its head, neck, and lower body to a more greenish hue on the back. You have to admit, this is one colorful bird. 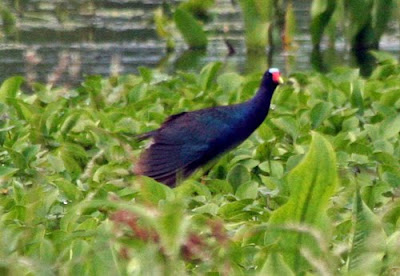 This behavior of dragging the wings is what made me think there might be a chick nearby. It's typical behavior of these somewhat chicken-like birds, a behavior shared with their domestic cousins. In fact, these birds, along with coots and moorhens, are sometimes referred to as "swamphens." The Purple Gallinule sexes look alike so I can't say if my bird was a male or female. Both sexes participate in incubating and caring for the young which may number as many as ten in a clutch. They also may be helped by others of their kind in caring for the young. These "extra" helpers appear to be from former clutches of the breeding pair. This is a fairly widespread behavior among birds. I've seen it in my own yard this summer with the Chimney Swifts. These interesting birds are only with us for the summer and then they return to South America for the winter. A few may stay in the southern tip of Florida for that season. Occasionally, gallinules wander very far afield. In spite of their somewhat clumsy appearance, they are strong fliers. Some strays have even crossed the Atlantic and they are one of the most frequent "accidental" visitors found in southern Africa. Personally, I'm just glad that this bird "accidentally" turned up at Brazos Bend yesterday to swell my meager year list.
American Coot Common Gallinule Purple Gallinule