Repost: An afternoon at the museum

June 11, 2014
Here's another post from the past about one of my favorite day trips.


Few things are calculated to make me feel my ignorance more keenly than a trip to the wonderful Museum of Fine Arts Houston. The place is a cultural treasure for our area and one that should be visited and enjoyed as often as possible. Even if it does make you feel stupid.

And so, to Houston we headed this morning, fighting heavy Friday traffic on our hour-long trek into the city.

The museum has expanded and renovated several times since my first trip there back in the 1980s. Today it is barely recognizable as its former self. Indeed, it has grown so that it is no longer possible to see it all in one visit - if it ever was. Looking at art takes time. You have to give each painting, each sculpture its due. You can't just rush through it. We hardly even made a dent in seeing what was available to us today and yet after a couple of hours I was completely overwhelmed.

The museum doesn't have any big A-list exhibitions right now. King Tut just closed and Rembrandt is coming next month, but just now things are a bit more low key.

They did have an exhibition called Modern and Contemporary Masterworks which we visited. It featured the works of avant-garde Latin American artists, some of whom I was somewhat familiar with - like Frida Kahlo and Diego Rivera - but many of whom were new to me. My overall impression of the exhibit was one of lush colors and movement, but I have to admit that many of the works were beyond my comprehension. A little too avant-garde perhaps.

I felt on much firmer ground with the antiquities, sculptures from ancient Egypt, Greece, Rome, and Mesopotamia. And I wonder what it says about me that I felt more at home in works that were 2000-3000 years old than in contemporary Latin American works? Probably just that I'm a hopeless old fogy.

We also visited the galleries featuring European art from the 13th to the 20th centuries. A disconcerting number (to me) of these paintings featured themes from the Bible. I found them disconcerting mainly because they were anachronistic. Like the picture of St. Paul writing at a desk with a bound volume open before him. A bound volume? Really? And, of course, there were all those pictures of Mary and baby Jesus, portrayed with blonde hair and blue eyes and beatific expressions. As Bob reminded me when I complained, these artists were trying to make a living. They had patrons and they painted what the patrons wanted, what they would pay for. The paintings are beautiful in their way and they exemplify the most exquisite technique, but art must touch something in the viewer to really be meaningful. These pictures just don't touch me. And what I said above about not rushing through art? I'm afraid I rushed just a bit among these galleries.

It was, however, in the European galleries that I saw my favorite picture of the visit. 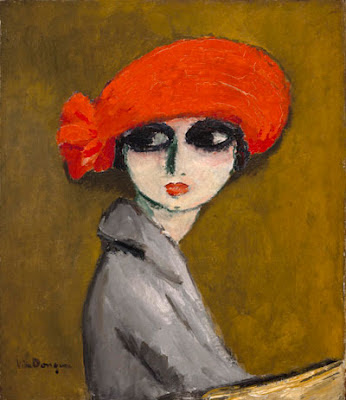 Now, if I were titling this picture I would call it "Girl in a Red Hat" or maybe "Girl With Big, Sad Eyes in a Red Hat." The artist, though, called it "The Corn Poppy," apparently because the red hat, which is the dominant feature of the painting, was the color of the corn poppies with which he was familiar. The artist was Kees Van Dongen, a Dutch painter who lived from 1877 to 1968. He painted this picture in 1919. He was a Fauvist, a school of painting known for using rich colors, and his specialty was painting sensuous and sometimes garish portraits of women. He also painted with a sense of humor and I think you can see all of that in this picture. I remember my professor in a long ago art appreciation class telling us that all we should ask of a painting is that we find its color and lines appealing and that it has something to say to us.  This painting speaks to me.

The other exhibit that we visited today was American Art: 1800-1970. These featured a lot of beautiful landscapes and story-telling pictures like the one of the Confederate soldier who has just found the body of his brother, a Union soldier, on a Civil War battlefield. Hard not to be moved by that. There were also portraits and still-lifes, many of them lovely, although none exceptionally memorable.

That was what we saw today, but there was so much that we missed. African Art, Asian Art, Pre-Columbian Art, Native American Art, Oceanic Art... Really, the mind boggles. Guess we'll just have to go back again.
art museum