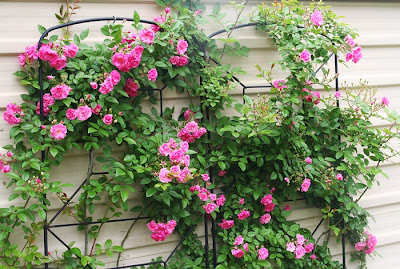 Do you know the story of the 'Peggy Martin' rose? The old "found" thornless rambler had lived in the garden of a gardener named Peggy Martin in Plaquemines Parish in New Orleans for many years. According to Peggy, she was given cuttings of the rose in 1989 from another New Orleans gardener who had originally gotten her cuttings of the rose from her mother-in-law. The mother-in-law had, in turn, gotten her rose from another relative in New Orleans.
The rose flourished in Peggy Martin's garden and she was delighted to see those perfect clusters of roses that resembled nosegays all along the canes of the plant. Over the years, she gave away cuttings to many of her gardener friends and so the old rose spread.
One of the people to whom she had gifted the rose was famed horticulturist Dr. William C. Welch of Texas A&M University. He recounts that after Hurricane Katrina hit New Orleans in 2005, he was in Birmingham for a conference and he met people from New Orleans who knew Peggy Martin and learned that she had lost both of her elderly parents in the flood. She and her husband had also lost their home and garden and commercial fishing boat. Plaquemines Parish was inundated in up to 20 feet of salt water.
Dr. Welch relates that when he was able to contact the Martins two months later, he learned that their home and garden had been under that flood of salt water for two weeks. When they were able to return, they found that two things in the garden had survived: a crinum and the old rambler rose.
In the months following Katrina, many people all over the country looked for ways to help the areas that had been devastated by that terrible storm, some of which had received a double whammy when Hurricane Rita hit shortly after the first storm. Dr. Welch had his own idea:

An idea came to me early on "in the middle of the night" about growing the "Peggy Martin" rose as a fund raiser for Zone IX Horticulture Restoration Fund. First, I checked with Peggy to see if she would be in agreement then I went to Mike Shoup, owner of the Antique Rose Emporium. Mike was enthusiastic - the first small crop of cuttings we provided quickly increased into a good supply.

And so, the rose became a fund raising project. One dollar from each sale was returned to the project to restore gardens in affected areas. It has proved to be a very popular project. And why not? The rose's disease-resistance, thornless stems with bright green foliage and colorful displays of bright pink flowers make it a winner in the garden.

I bought my rose two years ago at Antique Rose Emporiumand planted it in the driest, most neglected part of my garden during the worst drought I had ever seen. It hung on in that first year, but didn't grow much. Last year, it grew and flourished in spite of the drought but didn't have too many flowers. Now, in its third year, it began bloom in late March and soon will be completely covered in those pretty pink nosegays. 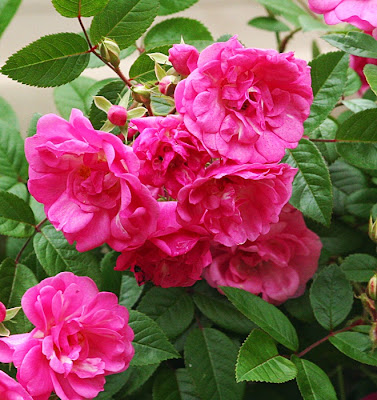 An example of 'Peggy's' "nosegays."

According to Dr. Welch, his rose, which lives about an hour west of my garden, blooms from mid-March through May, and then starts blooming again in late summer and repeats until the first hard frost. I'll be interested to see if my specimen does that well.

Who knows? I might even water the plant this year. 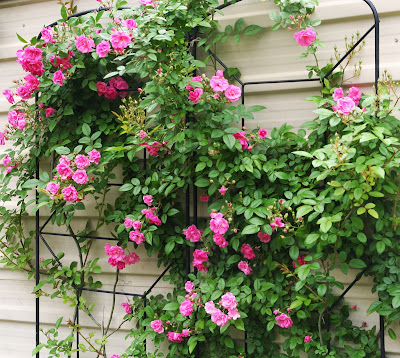 Don't let the dainty flowers fool you. This is one tough rose!