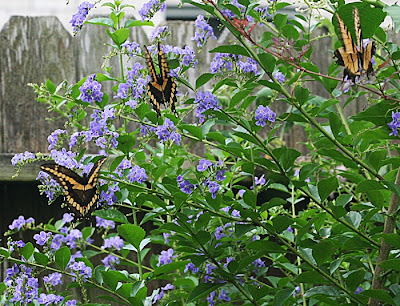 BY ALLAN PETERSON
The Emperor thought of his heart as a water wheel
flooding the rice fields of all creation
and bloodied the water for a better harvest.
His warriors hoped for a life with wings.
His swallowtails wrote him the same lines
—the secret of life is a resurrected worm—
He told them eventually time would run backwards
in their hands, now empty where a crossbow went.
A theory works if it answers the exceptions.
The writing in the air of swallowtails,
from here to where the time changes at Mexico Beach,
is like writing all the armies of the afterlife
waiting underground in China.
We are attuned to shadows. They strafe the shore.
An osprey spins above the trees.
But when a large one stops suddenly above the house,
all the laws have been broken.
A theory that a moment is a warehouse where armies are stacked
to the ceiling, then one falls, is the last exception.
The osprey’s underside is streaked like a zebra swallowtail.
It misses the fish that dove out of the reach of shadows
as the lovers jumped into theirs from the Bay Bridge to Fort Walton.
If any should meet hovering over a milkweed or reflection,
they might say didn’t I know you in another life,
the kind of thing said often in Fort Walton or the Orient
and didn’t plum blossoms freeze in the Emperor’s courtyard.
poetry