January 15, 2013
Yesterday marked one month since the slaughter of innocents at Sandy Hook Elementary School in Newtown, Connecticut. Since that day, 917 more people in America have been killed by gun violence.

And since that time, debate has raged - rage being the operative word - across the television screens of the country, adding more heat than light to the issue of gun violence. There has been a spate of crazy people posting videos threatening to start killing people if anyone tries to take their guns.

And then we have the truly delusional. Have you heard about the latest conspiracy theory by the gun nuts that the entire Sandy Hook incident was "performance art", something dreamed up by the Obama Administration in order to soften the country up for the confiscation of guns? All those parental tears are just pretend. Those children are not dead! All those little coffins were empty.

The Sandy Hook "truthers" are even going so far as to harass a man who helped some of the children fleeing the carnage on that day, claiming that he is just part of the "act." Truly these people seem beyond reach, beyond reason, and this is the quality of thinking of the opposition to the idea of any attempt to control the access to guns of any kind, including assault weapons and high capacity ammunition clips. It is an idea which an overwhelming majority of Americans supports but so far it is the crazies that grab the headlines, not the sane people who want commonsense reform. Instead of highlighting the president's statement in his press conference yesterday that if we can do anything to stop the murder of even one child we must do it, we hear from people like Wayne LaPierre of the NRA who says we will never be able to stop all gun violence, therefore, we shouldn't try to stop any.

As long as all the mass murderers are young white men, which almost all of them are, the gun nuts (who, frankly, are also mostly white) are united in their opposition to doing anything which might "infringe their second amendment rights" and they insist that "we must take time to reflect before we take any hasty action," trusting that as time goes by our memories of the outrage of Sandy Hook will fade as will our desire for urgent action. Of course, if the murderers were not WHITE men... 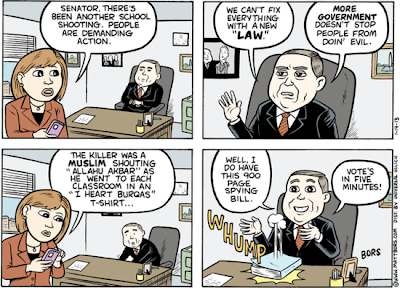 Will this time be different? Will we, the majority of Americans, be able to hang onto our outrage long enough to get something done to make the country safer? Will another month go by in which 917 more people are killed by guns? And where is the outrage for those victims?