Hillary is not impressed

January 25, 2013
This was the week that congressional Republicans have been panting for since September - the moment when they finally got to grill Secretary of State Hillary Clinton about the attack on the consulate in Benghazi on September 11. They've spent the last five months appearing on Sunday television news shows denouncing the "cover-up" and "scandal" which they attach to that incident. They also spent several weeks maligning the secretary of state and implying that she was afraid to appear before their scary committees and so was faking the "Benghazi flu." In fact, of course, she was ill, but I don't think any of the maligners have yet acknowledged that or apologized.

What they also haven't done - at least many of them haven't - is actually attend the briefings which the intelligence people have conducted to explain the facts of what is known about the attack. But then they are not really interested in the facts. They are interested in grandstanding for their base and in finding some cudgel with which to beat Hillary Clinton. Had they actually attended the briefings, they might have had the answers to their questions and would not have shown themselves up as fools this week, earning looks from Secretary Clinton that need no words. 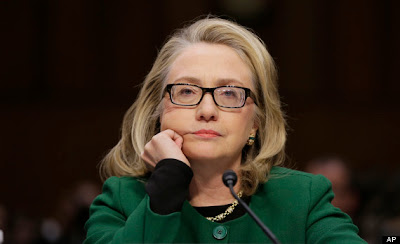 But, in the internet world, there are always words and it didn't take long. Soon a new Hillary meme was born. 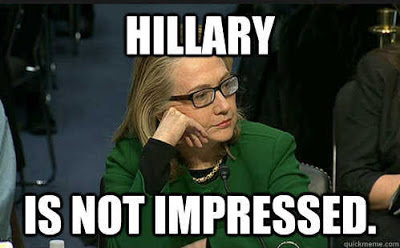 This shot was taken of Secretary Clinton as she was watching Senator McCain make his statement. He never really got around to asking any intelligible questions.

But then, again, these "hearings" weren't really about getting at the truth. They were about political grandstanding. And Hillary understood that and was prepared for these jokers, better prepared certainly than any of her interrogators. In the end, they didn't lay a glove on her. They didn't even impress her.
Hillary Clinton