I've written here (in Backyard Birder) many times about the project to help save the endangered Whooping Crane by developing an eastern migratory flock that flies between Wisconsin and Florida twice each year. Young birds are taught the route by training them to fly with an ultralight aircraft. The project has had some success - and some tragedies - and the flock is slowly growing.
Of course, Whooping Cranes are not the only members of that long-legged family that are endangered. In fact, many cranes right around the world are seriously endangered. Our own Sandhill Crane is a notable exception, probably because of that bird's adaptability and willingness to utilize a variety of foods in its diet.Another critically endangered bird is the Siberian Crane, part of whose range extends into Russia, and it turns out that Russian conservationists also have a program based on use of the ultralight to escort the young birds on their first flight. Recently, that program got a big boost in publicity around the world when they had a celebrity pilot for a portion of the ultralight's flight. President Vladimir Putin donned the crane costume and took the helm to lead the birds on their way. 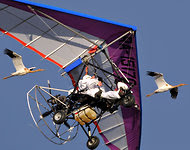 Mr. Putin is famous for his efforts to present himself as a formidable athlete, a caring outdoorsman, and "macho man of adventure," not unlike a certain blue-eyed, chisel-framed candidate for vice-president in this country.  As The New York Times points out in its article about his flight:

Mr. Putin on past expeditions has tranquilized a tiger, used a crossbow to extract tissue from a whale and put a tracking collar on a polar bear. News of his latest plan rippled over the Internet all day Wednesday, to great merriment. Some wondered just how far he would go. Would he try to imitate the gasping-shrieking cry of the cranes, to instill more faith in his leadership?

He has also appeared shirtless riding a horse in Siberia and flown on a fighter jet, a bomber and an amphibious firefighting airplane. Last summer, he dived into the Kerch Strait in the Black Sea and, remarkably, quickly discovered fragments of two ancient Greek urns.

So it seems that Mr. Putin's exploits are sometimes prone to exaggeration, not unlike Mr. Ryan's. But really, if he wants to be involved in "The Flight of Hope," which is what the Russian conservationists call their crane project, then I say "good on him." If Vladimir Putin has a stake in seeing that the Siberian Crane survives as a species, then that probably increases its chances of avoiding extinction in a very substantial way. These days, cranes need all the friends they can get.
Siberian Crane Vladimir Putin Whooping Cranes