Summing up: On to November!

September 08, 2012
So the Republicans' and Democrats' quadrennial celebrations of themselves are over, and now it's time to get serious about the election. Less than two months left until that fateful date. Did I hear you say, "Thank God!"?

I didn't watch any of the Republican convention in real time. I only read and watched some of the news reports afterward and I did look at the platform which they adopted. From such a perspective, one could only be struck by what a hate-filled, angry, pessimistic, narrow-minded, misogynistic, and downright unpatriotic congregation it appeared to be. The theme seemed to be, "I've got mine, Jack, and f**k you!" A perusal of the faces of the delegates, mostly white and white-haired, seemed to confirm that impression. I truly don't mean to be unkind or unfair to them, but that is just the way they seemed to me. Perhaps if I had watched more of the actual convention, I might have had a somewhat more sympathetic view of the group, but somehow I doubt it. The performance art of that angry and rudely profane old man Clint Eastwood and his empty chair seemed the perfect metaphor for the convention.

The Democratic convention was an entirely different kettle of fish. I did watch sections of it, switching between convention coverage and my baseball game of the night. The first and most obvious difference that struck me full in the face was the audience of delegates. As the cameras panned over the crowd, one saw every hue in the human rainbow of colors. Moreover, based on their distinctive dress, one could identify Jews, Muslims, and Sikhs, and who knows how many other faiths were represented there? I suspect there may have even been a few fundamentalist Christians. In short, it looked like the diverse group of people that you would find in any gathering in downtown Houston or any other big city around the country. It looked like America.

But the real difference was in the tone of the speeches. Sure they derided the Republicans, but they didn't seem to hate them or even be angry at them personally. They were more bemused and appalled. They, of course, made a great effort to point out their differences in support of women's rights and gay rights and especially their support and appreciation of the military, something which was incredibly and unaccountably missing from the Republicans' rhetoric last week. They made jokes - some at their own expense - and they really seemed to be enjoying themselves. There wasn't a pinched face in the house! Maybe that was partly because they were entertained by some real barnburning speeches. I watched at least parts of the major ones.

Mayor Julian Castro of San Antonio gave the keynote speech. It was full of youthful energy and enthusiasm and optimism for the future. Castro represents the very best that Texas has to offer and he gives us liberals hope that the rising brown tide of voters in this state may some day help us to wash away the backward-looking, anti-science, anti-woman, anti-critical-thinking, bought-and-sold-by-the-oil-companies clique that controls the state today. Plus, his speech brought one of the sweetest moments of the convention as the cameras found his watching family and focused on his three-year-old daughter as she discovered her image on the big screen.

I watched perhaps half of First Lady Michelle Obama's speech and she made me proud. Her speech was filled with heart and soul and love of family. She took care to emphasize one of the causes she has championed along with Jill Biden, that of being an advocate for those who serve the country in the military and especially for their families who also serve.

On Wednesday night came the speechmaker everyone had been waiting for - Bill Clinton. I missed the first ten to fifteen minutes while watching the Astros and Pirates, but not to worry: There was still plenty of speech left! He took up each of the arguments that the Republicans have made against President Obama and his record of the past three-and-a-half years, and, as usual, the loquacious former president went off script as he sought to explain in great wonkish detail, but in an utterly understandable way, just why each of those arguments was specious. And he did it all with a smile. He made a blazing defense of the Obama record to the utter dismay of all those pundits who had been eagerly anticipating a half-hearted effort.

After his speech, the next day, the picture of his wife, Hillary, who was in East Timor at the time, watching video of the speech went viral on the Internet, as everything that she does seems to these days. 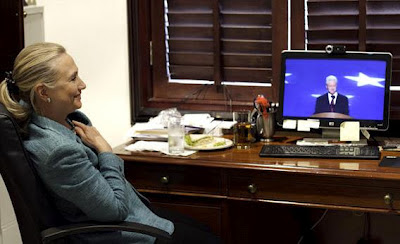 Finally, on the last night of the convention, we heard from the candidates themselves. First, Joe Biden extolled the courage and the hard work and the care and concern for the American people of the man with whom he serves and he got to utter that phrase that he has made famous over the last several months: "Bin Laden is dead and General Motors is alive!" And finally, it was time for the president himself.

I watched all of the president's speech. I thought it was sober and reflective. It did contain a litany of his accomplishments, but it also made clear that he knows that the country is not yet out of the ditch that it was driven into and that there is still much to do to get us where we need to be. I was especially struck by his invocation of the responsibilities of citizenship, by his assertion that we are not just individuals whose only role is to look out for ourselves but that we must look out for our fellow citizens because we are all in this together. We must look to the right and the left, behind and ahead, and help lift those who have fallen. As the Marines pride themselves on the slogan "no Marine left behind," the president was invoking the slogan for the whole country, much as his wife had said in her speech, paraphrasing,  that when we walk through the door of success, we don't slam it shut behind us. We prop it open for those who follow. It was a very different philosophy from what we had heard from Republicans.

I thought it was a very effective, successful convention for the Democrats. There was only one tiny blip on their screen and that involved two words that were omitted from their platform: God and Jerusalem. Fox News and the Republicans went crazy! How dare the Democrats not mention God or say that the capital of Israel is Jerusalem??? (And what the hell is Tel Aviv?) At which point the president himself apparently directed the convention to insert the wording. It was sloppily done, really the only sloppily done moment of the week. But I do understand what the president was doing. If those words had not been in the platform, Fox News and its minions who are running for president and vice-president would have beat that straw issue all the way to election day. It would have been a distraction that the Democrats don't need. They need to focus on the true issues facing the country. They need to focus on the truth, because when they do that, they win. It's that well-known liberal bias that the truth has.

On to November!
Democrats politics Republicans