September 14, 2019
A roundup of the week's news of birds and the environment: 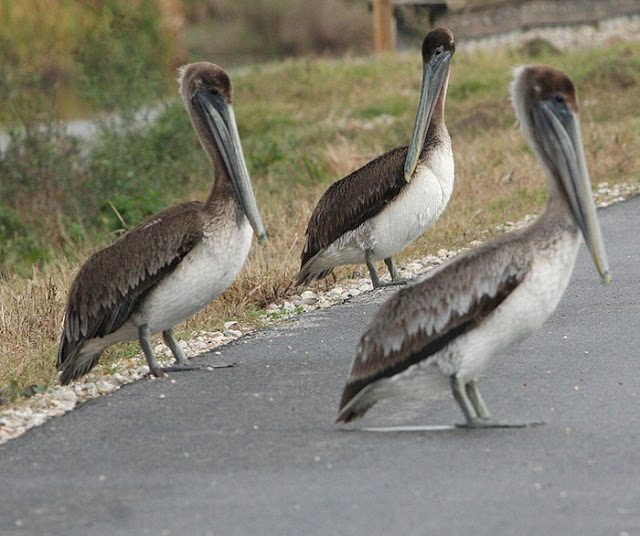 Three immature Brown Pelicans stand on a road in the Anahuac National Wildlife Refuge on the Texas coast. Both Brown and White Pelicans are present in the refuge.

Every year on September 11, there are two soaring beams of light turned on over Lower Manhattan as a tribute to those that died in the attack on this date in 2001. Unfortunately, these lights are deadly for birds, bats, and insects that are confused by them and can circle around them until they are completely exhausted. A tribute that kills thousands of migrating birds does not seem an appropriate way to remember those who were lost that day.

There are now places on Earth that have already heated up past the 2 degrees Centigrade that climate scientists say represent a danger point and these zones are growing.

We know that the asteroid that hit the Gulf of Mexico off of Yucatan 66 million years ago was the beginning of the end of the Mesozoic Era and the dinosaurs. But now, by drilling into the Chicxulub crater, scientists are getting a better idea of just what happened after impact.

Beekeepers are suing the EPA over the agency's approval of the use of pesticides that harm bees. The lawsuit, filed this week in the Ninth Circuit in San Francisco, names the agency and its administrator, Andrew Wheeler, as defendants.

Meanwhile, a new study published in Science magazine indicates that exposure to neonicotinoid pesticides may be contributing to steep declines in songbird populations. The researchers found that White-crowned Sparrows that were so exposed lost weight and delayed their migration, unlike birds that did not have that exposure.

Extreme weather events have displaced a record seven million people from their homes during the first seven months of this year. This puts 2019 on a pace to be one of the most disastrous in almost two decades.

Two newly discovered species of electric eel pack a pretty hefty jolt at 860 volts. While not strong enough to kill a healthy human, it is certainly sufficient to get the attention of the scientists who handle them in their studies.

Antarctica has only one known native insect - the Antarctic midge. The midge spends more than half of its life frozen. The scientists who study them are hoping that understanding the insect's survival strategy might have implications for managing human health issues.

The latest pick to run the Fish and Wildlife Service follows the trend of former industry lobbyists being selected to run government agencies. The nominee, Aurelia Skipwith, previously worked for agricultural giant Monsanto as well as other agricultural businesses.

New Jersey has been trying to re-establish a population of Bobwhite Quail, which had been extirpated there, in the state. They are looking at making bigger releases of the bird to try to help the process along.

It is feared that a new heatwave "blob" may be developing in the Pacific Ocean that could cause deadly algae blooms and kill sea lions and other marine mammals like a similar phenomenon that occurred in the same area in 2014-2016.

The current administration in Washington plans to scrap the Obama-era definition of what qualifies as "waters of the United States" under the Clean Water Act. It would return the country to the standards put in place in 1986. Critics say the rollback will speed the conversion of wetlands and headwaters, which provide critical habitat for wildlife and support the nation’s drinking-water supply. 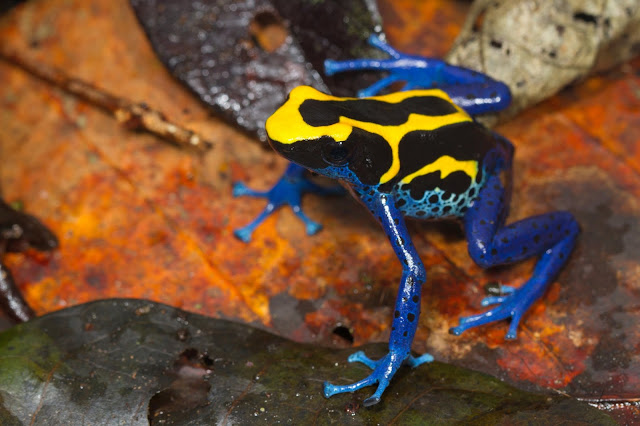 The bright colors of poison dart frogs serve a purpose; they are a warning to predators to steer clear of them. A study shows that the differences in markings matter, but that in spite of those variations, the differently-marked frogs thrive.

Birders can make their yards more welcoming for migrating birds - or indeed for permanent resident birds - by planting native plants that provide food for them and by encouraging the insects which are devoured by birds. A balanced ecosystem is the best way to welcome the birds.